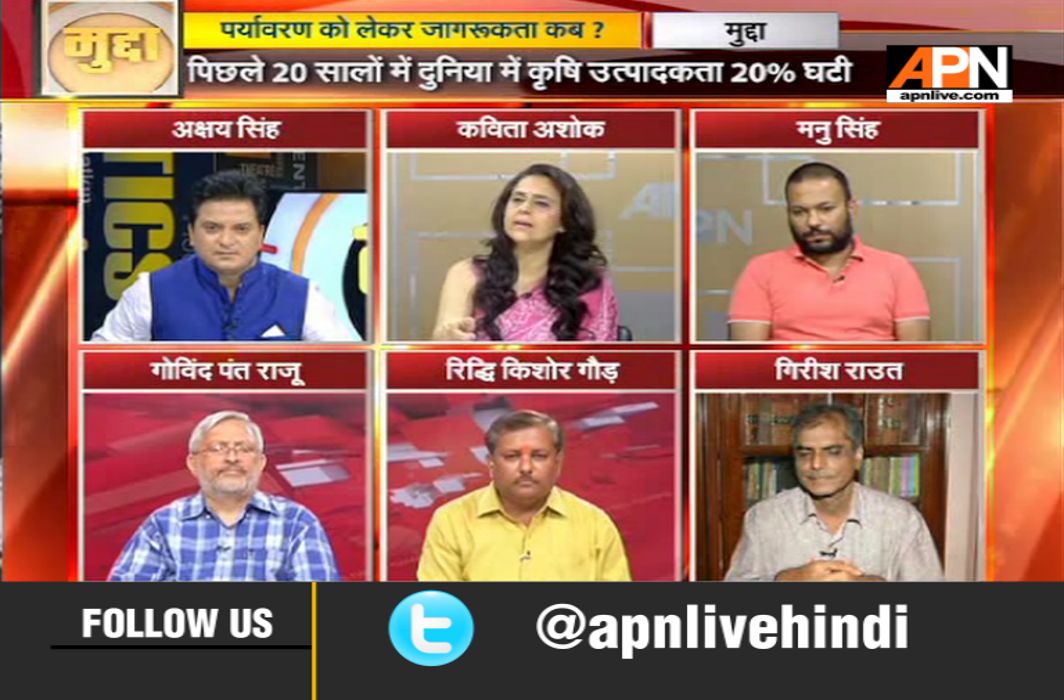 Anchorperson Akshay Tyagi posed the first question to Kavita Ashok who congratulated the people of India for observing the World Environment Day. “The UN is responsible for bringing this issue to the fore,” she said.

Manu Singh said: “It is sad that India’s performance on the environment index is dismal. We are looking for growth only for the sake of growth; the policies are not designed holistically. Plastic and pollution will be the biggest challenges in the days to some. Species are being wiped out. All this is not good for the eco-system.”

Kavita Ashok said:”I would not like to take a sadistic approach. There are indications that the government is taking a serious look at environment now.”

Riddi Kishore said: “People need to come together. The issue is not for the governments alone to solve. Garbage issues are handled at the micro level. Don’t expect the government to solve each small issue. Citizens need to be more pro-active. Why can’t we take our cloth bags when we go out for shopping? 80 lakh tonnes polythene is going into the water bodies. This is serious.”

Girish Raut said: “Carbon dioxide levels need to go down, as this can be life threatening. We have gone beyond the limits.”

Raju said: “The state of environment is such that all nations need to come together to deal with it. Global warming and carbon dioxide kind of issues need global cooperation. Small steps can make us all aware. This issue has to be dealt with at the micro and the macro level.”

Kavita Ashok said:”I like to think differently. I deal with young students in sensitizing them to eco issues. Citizen participation is needed, and each person’s effort counts.”

Manu Singh said: “Governments need to take this up on a war footing. How does the government plan to give homes to refugees? Forests will be cut, but is that a holistic solution?”

Raut said: “You see so many cars on the road, cement is being used to construct buildings. The green cover is thus depleting.”

Kavita Ashok said: “Migration to urban areas has affected eco-consciousness. Consumer awareness and producer awareness, recycling and e-waste, these are subjects that we all need to think about clearly.”

Raut said: “We need to put the brakes. Many tines government relies on outdated data, and so lopsided policies are bound to result.”

Manu Singh said:”The matter is irreversible. A blanket ban on some issues is needed. Look at the number of superstorms in recent times. Air, soil and water protection have to come into our cultural consciousness.”

Raju said:”Construction of hill roads bring in as much development as eco disasters. All-round development has to take a holistic approach, weighing all the pros and cons.”

Kavita Ashok said:”Where are the recycling plants in India? Earlier we used to send to China, but now China has refused. This is now a big mudda.”

Raju said:”Bundelkhand is heading for disaster. Train for sending drinking water to people? This would not have happened if we had planned well. In Lucknow, Gomti is in bad shape due to the waste being dumped there. Same stories are all over India.”

Kavita Ashok said: “Marine littering is a big issue. Plastics in the seas are killing marine life. Tree plantation drives are not enough. We need to ensure trees are not uprooted anymore.”

Manu Singh said:”We need to rise above cosmetic surgeries. Eco issues have to come into our everyday culture.”

Govind Shrama said: “We all need big cars and fancy houses. All of us need to set our priorities right.”

Raju said: “Plastic ban should be taken seriously to avert an eco disaster that is sure to be in the making.”

Kavita Ashok said:”Just bear in mind, if we have trees, we have life.”