Panelists say that we need to be careful so as not to lose the benefits accrued by the lockdown. 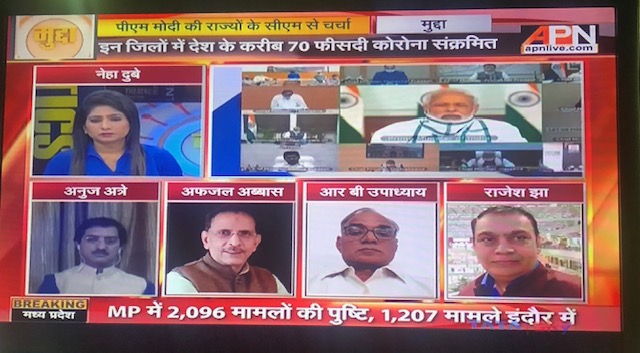 Jha said: “Lockdown 1 and 2 have been prompt and correct decisions taken by the PM.”

Atre said: “But the people have run out of patience. It is time that normal activity is resumed in the green zones, with the necessary precautions. Now conditions are much improved. The long duration lockdown has been impacting the economy. The PM has been saying that wages to workers should not be stopped, but he needs to see how people will pay if their own inflow is impacted.”

Abbas said: “Life and livelihoods both need to be seen.”

Upadhyay said: “Even green zones can jump to red zones all of a sudden. So, there has to be a measured strategy to open up places. Even I realise that the poor are suffering, but health comes first.”

Ate said: “See, the testing has to improve. If the testing capacity improves, then we can take proper decisions on opening up sectors. Also, a lot are asymptomatic patients. People are now desperate for the economy to open up.”

Jha said: “See, everyone is having problems living in isolation. Everybody wants to open the lockdown at the earliest. India with its huge population has been able to hold on to the numbers, so let’s not get too impatient. The government has been trying to improve the testing too. Shops will be opened gradually.”

Abbas said: “Even in the month of Ramzan, people have been doing namaz at home.”

Upadhyay said: “WHO has warned that around May 15 coronavirus spread will be at its peak. See it’s a new virus and a lot of studies are going on. People have been patiently following government orders.”

Atre said: “Yes the government should pay heed to WHO advice. But livelihoods also cannot be ignored. The biggest fight for corona involves more testing. The PM himself has been saying that both jaan (life) and jahan (livelihood) are important.”

Jha said: “Economic activities have to be started. We all know that.”

Abbas said: “The condition of the workers and labourers needs to be looked into with urgency.”

Upadhyay said: “Governments are not just meant for the rich to fly back home. What arrangements were made for the migrant labourers? Lockdown exit strategy has to be properly pre-planned and guidelines must be set.”

Atre said: “The Rajasthan government has been very responsive. Bhilwara district acted fast. States that have BJP governments were given testing kits in larger numbers than those states that did not have a BJP government.”

Jha said: “This is no time for politics. We are together in this. There has been no discrimination.”

Atre said: “The ground reality is vastly different. Have the numbers risen only because of the Talbhigi Jamaat event? That’s not true, though it was a big mistake.”

Upadhyay I: “If you talk about the Talbhigi Jamaat event, then also discuss Namaste Trump.”