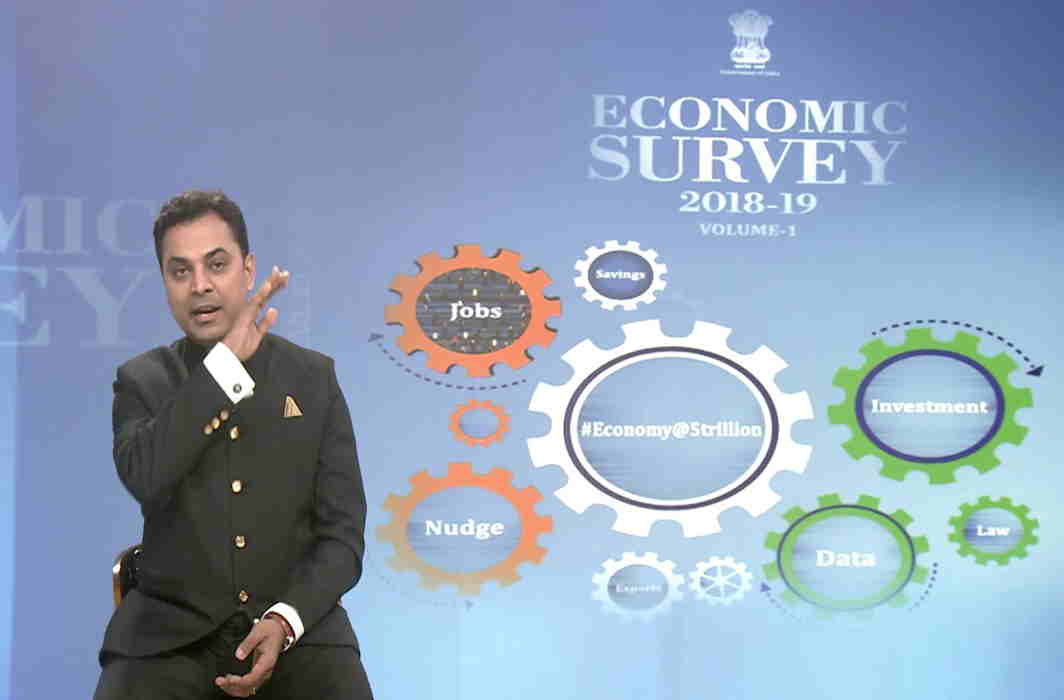 The Economic Survey, tabled in Parliament today (Thursday, July 4) by finance minister Nirmala Sitharaman has projected a 7 per cent growth rate for GDP (gross domestic product) in the 2019-20 financial year.

This indicates a higher than the estimated 6.8 per cent growth rate for the previous year ended March 31. The Economic Survey cited investment rate picking up in FY20 on higher credit growth and improved demand as the factors for the higher growth rate.

Prepared by Chief Economic Adviser (CEA) Krishnamurthy Subramanian, today’s Economic Survey is the first by the re-elected Narendra Modi government. The release of Economic Survey 2018-19 comes a day ahead of the presentation of Union Budget in Parliament.

“Given the macro-economic situation and the structural reforms being undertaken by the government, the economy is projected to grow at 7% in 2019-20. Growth in investment, which had slowed down for many years, has bottomed out and has started to recover since 2017-18,” the Survey said.

Growth is expected to pick up in 2019-20 as macroeconomic conditions continue to be stable while structural reforms initiated in the previous few years are continuing on course. The survey said India maintained its macro-economic stability by containing inflation within 4% and by maintaining a manageable current account deficit to GDP ratio. “The current account deficit to GDP was higher in 2018-19 as compared to 2017-18, primarily due to higher oil prices, which were about $14/barrel higher in 2018-19 vis-à-vis the previous year. However, the CAD started to narrow in the third quarter of the year,” it added.

It also highlighted that lower global oil prices are expected to decline in FY20. Lower global growth and increased uncertainty over trade tension may hit exports, it added.

Sharing his view on the survey, Prime Minister Narendra Modi tweeted: “The Economic Survey 2019 outlines a vision to achieve a $5 trillion economy. It also depicts the gains from advancement in the social sector, adoption of technology and energy security.”

CEA Subramanian said: “Our team has put in a lot of effort with a lot of dedication. I hope results are good, and we are able to contribute to the ideas for the economy.”

This year’s survey brings “an effective minimum wage policy that targets the vulnerable bottom rung of wage earners can help in driving up aggregate demand and building and strengthening the middle class,” he added.

In a series of tweets, CEA Subramanian stated that the survey “is inspired by (Mahatma) Gandhiji’s Talisman: ‘…Recall the face of the poorest man [woman], and ask yourself, if the step you contemplate is going to be of any use to him [her].’

He also mentioned that “one of the biggest hurdles to $5 trillion economy is poor enforcement of contracts and dispute resolution. Steps to speed up legal process should be top priority.”

He added that the survey “is imbued by the spirit ‘blue sky thinking’ in thinking about the appropriate economic model for India. This is reflected in the sky blue cover of the survey.”

“The theme of the survey – ‘Shifting Gears’ – is intended to achieve a sustained growth rate of 8 per cent. Using the learning from the Global Financial Crisis, the Survey departs from traditional thinking to view the economy in either a vicious or a virtuous cycle,” said Subramanian. “The Survey makes a sincere effort to live up to the expectation of being an indispensable guide for following, understanding and thinking about the Indian economy.”

Rural wages growth seems to have bottomed out and has started to increase since mid-2018. Further growth in rural wages should help spur rural demand, according to the Economic Survey.

Investment rate, which was declining from 2011-12, seems to have bottomed out and is expected to pick up in the year 2019-20 on the back of higher credit growth, said the Economic Survey.

The projections come after some disheartening trends earlier this year. In January-March, annual growth slumped to 5.8 per cent, the slowest pace in 20 quarters. Growth for the financial year that ended in March was 6.8 per cent, also a five-year low, and indicators such as plummeting industrial output and automobile sales have stoked fears of a deeper slowdown.

Gujarat Police have arrested at least 40 people in Kutch district after three cases were filed to probe the violence that broke out on Sunday which allegedly left one man dead and several others injured, including policemen.
Read more

The government has written to WhatsApp CEO Will Cathcart, asking him to respect the privacy and data security of Indian users and withdraw new terms and privacy policies introduced by the messaging platform.
Read more