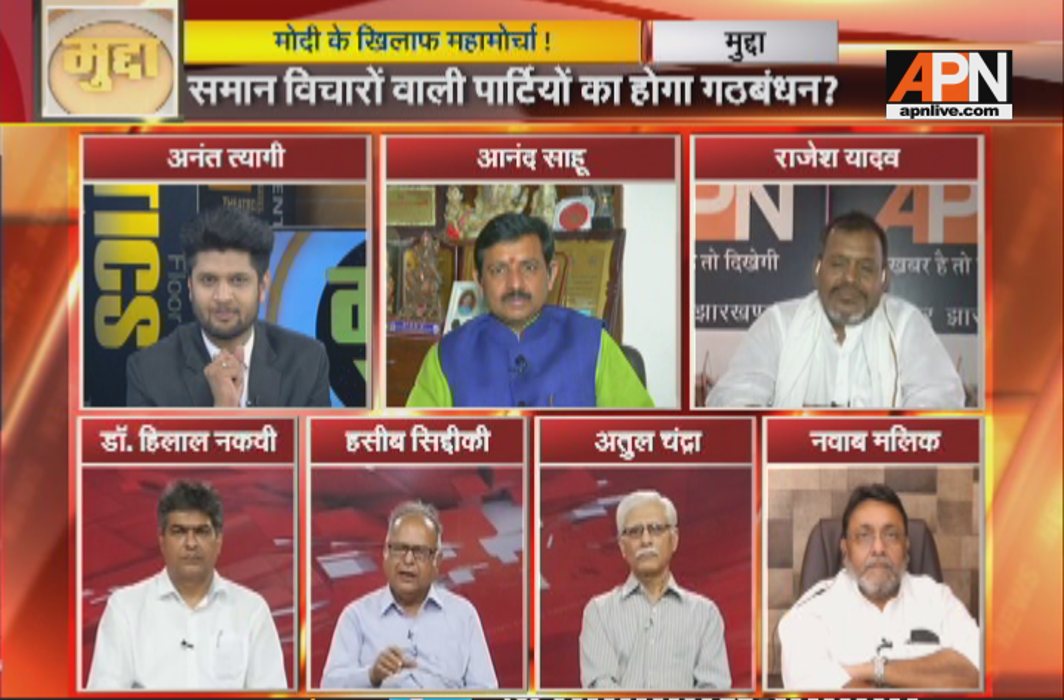 West Bengal Chief Minister Mamata Banerjee extended her support to Bahujan Samaj Party (BSP) supremo Mayawati, who asserted that her party’s understanding with the Samajwadi Party (SP) would not be affected by the defeat in the Rajya Sabha polls and that she would not allow the BJP’s “design” to create a rift between the two parties to succeed.Congress’s Sharad Pawar too is calling over leaders for parleys. As the opposition gears up for an anti-Modi grand alliance, will the opposition succeed in denting Modi judggernaut in 2019?APN’s popular debate Muddatook up this issue. Anchorperson Anant posed the questions to BJP’s Anand Sahu, Congress’s Hilal Naqvi, NCP’s Nawab Malik, RJD’s Rajesh Yadav, noted journalist Atul Chandra, and poltical expert Hassib Siddiqui.

Naqvi said the grand alliance has got nothing to do with the BJP alone, as the Congress has tied up with like-minded parties in the past. “Our slogans focus on removing corruption, economic reconstruction, settling the banking industry which is going through a rough phase, and improving foreign policy,” he said. “We are fighting against the BJP’s lack of governance and mis-governance,” he added.

Malik said “we are trying to make sure the anti-BJP votes are not divided.”

Yadav said BJP has failed in fulfilling its promises. “Dalit and backwards are dissatisfied. All parties and the junta are anti-BJP,” he said.

Siddiqui said anti-incumbency and various factors will help opposition parties. “It’s certain that a front will be formed to oust Modi, and the opposition is expected to learn from past mistakes, and at many places where the Congress is not powerful, a third front will emerge.”

Malik said there are some regions where the Congress is in direct confrontation with the BJP, while some areas like Telengana, Orissa and Kerala will see the formation of a third front. “BJP will lose at least 100 seats. Modi is the face of Sangh agenda, and those who oppose this, will fight Modi. There has been a record sugarcane crop, but BJP has not been able to capitalize on this, for the farmers,” he said.

Chandra said bargaining is certain to happen among parties. Mamata has called Stalin of DMK, Congress is also in parleys, so regional party alliance is possible. “But it’s still not clear if regional opposition will join hands with Congress,” he said.

Sahu said they are very confident about people supporting the government policies, and the BJP winning again with a huge mandate, in 2019.

Naqvi said that to get votes a viable alternative has to be presented before the people.

Sahu said “the government has been working for the benefit of farmers, labourers, SC/ST, women and so on, with complete transparency. This is why the opposition is getting impatient and is tying up desperate alliances.”

Malik said “banking scams are on the rise, and PM goes abroad to hand over contracts to the corrupt.”

Chandra said that being a larger party, Congress will have better bargaining power than the regional parties.

Siddiqui said vote polarization has to be stalled by the opposition, and a possible grand alliance is already in the making.

Yadav said BJP is not living up to its slogan of “sabka sath, sabka vikas”; rather it’s “kuch longon ka vikas (only some people are prospering).” He added that if a common minimum programme is set, and regional aspirations are reined in, alliance governments work pretty well, like the UPA and the NDA governments have shown.