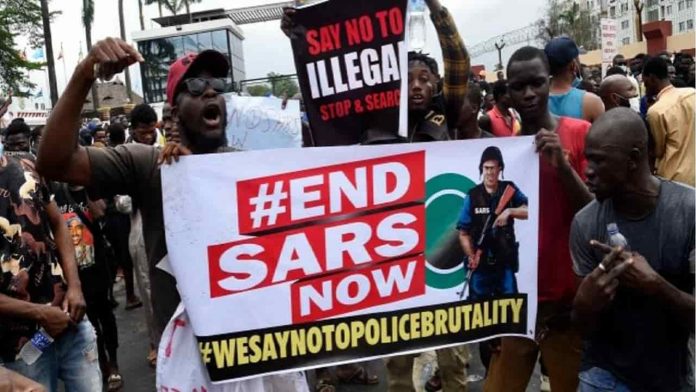 Tens of thousands of Nigerians have been protesting for more than two weeks against police brutality. The hashtag #EndSARS has been in trends not only in Nigeria but across various parts of the world for many days.

A number of youngsters have had unfortunate encounters with police in Nigeria especially SARS, and this is the same for other African youths. Youngsters mobilisation through social media starts staging demonstrations calling for the omission of the Federal Special Anti-robbery Squad (SARS). Due to the rise in police brutality cases in Africa, citizens are unhappy, and they have been taking to roads in a demand for the abolition of the Special Anti-Robbery Squad (SARS).

SARS was a special police unit set up in 1984 as Nigeria, the most crowded country of South Africa battled increasing numbers of crime and kidnappings. Initially, it was successful in reducing the cases of violent crime, but more recently the unit had been turned into the banditry, according to the Fulani Kwajafa, the man who established SARS.

According to a report released by Amnesty International in June 2020, SARS was responsible for at least 82 different cases of ill-treatment, torture and extrajudicial execution between January 2017 and May 2020.

Human rights NGO Amnesty International said it is investigating the killings and the conditions surrounding them.

Immediate reason behind the protests

The protests sparked by a viral video that shows SARS officers killing a youth in the southern Delta state. However, the authorities denied the video was real, and the man who created the video was arrested, but it provoked even more anger.

The #EndSARS protests have taken place in different cities across the world including Toronto, New York, London, and Berlin. Several celebrities like Kanye West, Diddy and Rihanna have raised their voice for the support of the protesters online.

On tuesday, former US Secretary of state Hillary Clinton called on President Buhari and the Nigerian army to stop killing protesters.