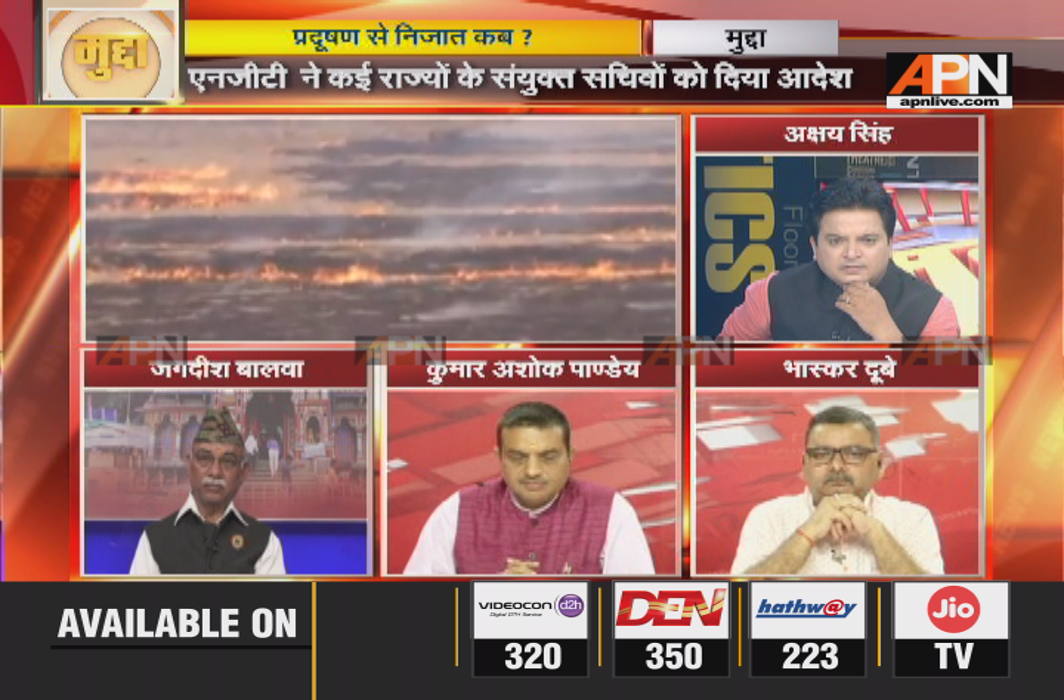 Pollution is greying the skies again in and around Delhi, though as per official records, stubble burning has gone down in the neighbouring states. The Graded Response Action Plan to curb air pollution in Delhi-NCR has come into force. Anchorperson Akshay posed the questions, in APN’s popular debate Mudda,  to panelists including the BJP’s Kumar Ashok Pandey, environmentalist Jagdish Bawla, and noted scribe Bhaskar Dubey.

Bawla said: “This problem is of the entire country. This issue seems to have done little in changing our mindsets. The response is too weak. Stubble burning has to be tackled in a big way. The government should buy out the stubble to make paper and so on, to ensure it does not get burnt.”

Akshay pointed out that stubble burning has come down. To this, Bawla said: “I am not sure if we can rely on government data alone.”

Dubey said: “In reality, we are not that pro-active. Earlier there was far more stubble, and far more agriculture. It used to be fed to animals, to keep animals and pets warm, or to make compost. Since MNREGA came into effect, there has been a change. We are suffering due to the lopsided policies of the government. Small farmers prefer plying rickshaws than do farming. Only big farmers are left now. Global warming effect is there, seasons have changed. I give no credence to government data. Farmers need to be made aware, they should be inspired to use sprays to make stubble into manure.”

Pandey said: “From the oceans to the earth, a lot of development has taken place. And yet, the common man is looking for safe water to drink and clean air to breathe. Environment issues need to be handled holistically. Plastic menace is there. In villages, people use to make good use of jute. All these things have adversely impacted the environment and have become major challenges now. The PM is appealing like a teacher to educate people about stubble burning and to get rid of plastics. These issues have arisen because of our desire to simplify our lives.”

Dubey said: “This is a big problem, and will be snowballing in the coming decades. In Lucknow, over a lakh school kids recently did simultaneous projects, like essay writing and poster making, on the issue of environmental menace. When the kids and youth are educated, change will ultimately happen. Teachers are a huge source of inspiration for children, and teachers should ensure that the youth are educated and made sensitive on this important topic.”

Bawla said: “I agree, the youth will make a change. There should be incentive of additional marks for kids who show eco-consciousness. Some sort of incentive system should be offered for rural kids as well, so that stubble is not left burning.”

Dubey said: “Like in China, we are also trying to figure out how to reduce plastic. The government should come out with stricter laws, and look at green issues with urgency, since they are far more important than mandir-masjid, or votebank politics.”

Pandey said: “From schools to colleges, all should look at reducing plastics. Each micro step will help.”

Dubey said: “If farmers find good income in villages, they will not run to towns, and village economies will themselves look after the environment holistically. Increasing awareness is the government’s responsibility. PM picking up plastics is not enough. All BJP members, government functionaries and ministers, MPs etc should send a clear message across. This change cannot come overnight.”

Bawla said: “Delhi has been battling pollution since over the last ten years, it is not something new. A system  of incentives should be put into place to make any meaningful impact.”