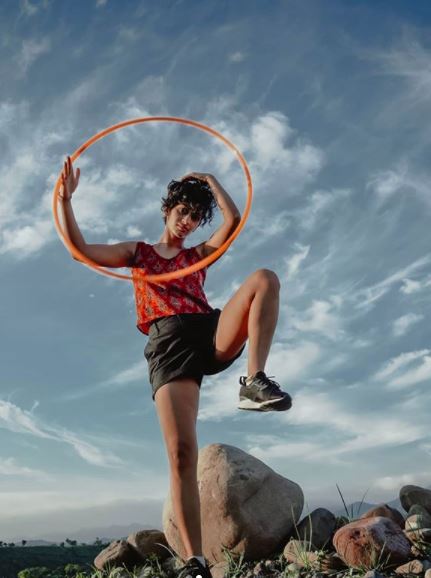 It is pretty easy to dance wearing a saree, though have you tried doing it with sports shoes on? Well it sounds tough, but no more as a new hashtag #Sareeflow is going viral on social media, shows that it is not only possible, but rather fun to witness.

Eshna Kutty, a hula hoop dancer from Delhi, has stunned netizens with her gorgeous hula dance video which she posted on Thursday. Dressed in a maroon saree and rocking it with a pair of sports shoes, the 23-year-old is seen hoop dancing with expert ease to a Delhi 6 song. So far, she has got more than 2 lakh views. Without any further ado, watch the exceptional video here.

On Instagram, Eshna post reads: “Dress up to goof around”. She also explained why she put out the #sareeflow trend. She said, “The intention was not to create the most sensual saree video, but to feel so comfortable and happy wearing it without the pressure of being a delicate lady.” With the trend, she also wanted to highlight Indian hoopers.

Kutty’s mother, journalist Chitra Narayanan, also retweeted the video. Her tweet read that she woke up today with several people whatsapping her this video, her tweet said, “Meet my daughter who has sparked off a #sareeflow trend”.

Mahindra boss Anand Mahindra praised her in a tweet: “I believe I’m already late in noticing this video…But it doesn’t make me any less awestruck..A star is born…Thank you for the #Friday high. May the #sareeflow movement grow…(sic).”

However, this is not the first time that Kutty has posted such a video. And honestly, it is the best content we have seen in a while.