Home Blogs Farm laws set to go but after 1 year of a nationwide...
BlogsLatest india news

Farm laws set to go but after 1 year of a nationwide protest, deaths of 700 farmers

According to a news report of October 2021, nearly 600 farmers have been lost their lives during the year long protests. 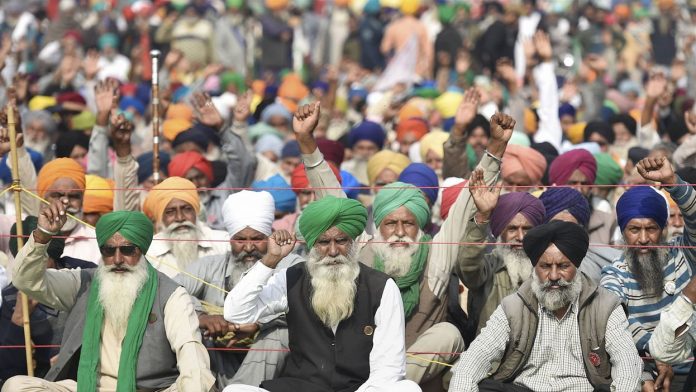 Addressing the nation on the occasion of Guru Nanak Jayanti, PM Modi said that the laws will be repealed by the end of the month in the Winter Session of Parliament.

Requesting the protesting farmers to go back to their fields and homes, PM Modi said that though the laws were enacted for the benefit of farmers, the Government could not convince them about their benefits.

The Central government has taken the decision to repeal the three farm laws after the death of nearly 600 farmers who have lost their lives during the year-long protests across the nation. The farmers had staged protests on the borders of Delhi and had also taken out a march on Republic Day this year. A farmer lost his life during the procession with several versions doing the rounds on how the farmer lost his life.

The decision is also looking like the familiar masterstroke months before elections in Punjab, Uttar Pradesh, Uttarakhand, Goa and Mizoram where there is opposition to the farm laws. The politically important decision comes on the occasion of Gurpurab, the birth anniversary of Guru Nanak, is being celebrated across the country.

Partisan voices have often dubbed the protesting farmers as Khalistani, referring to separatist forces believed to be active in Punjab. As soon as PM Modi announced to repeal three farm laws, BKU leader Rakesh Tikait, who had emerged as the face of the demonstration, tweeted that the farmers would not withdraw their agitation immediately and would continue till the laws are repealed in the Parliament. Meanwhile, the Ugrahan faction welcomed the prime minister’s announcement to repeal the three contentious farm laws.

The government held multiple rounds of talks with representatives of the protesting farmers and tried to convince them telling the benefits that they offered to small famers under farm laws, but the protesters remained adamant on seeking the repeal of all three laws.

The farmers’ main apprehension was that the three farm laws will eventually abolish the Minimum Support Price (MSP) guaranteed by the Centre on select crops, leaving them at the mercy of big corporate houses.

Farmers from Punjab and Haryana and parts of Uttar Pradesh have been protesting for the last one year demanding to repeal three farm laws despite the Centre’s continued efforts to break the logjam.

In its continuing attempt to weaken the farmers’ protest, the government has deployed massive security at the borders of Delhi, banned Internet around Delhi, blocked highways with new concrete barricades, barbed wire and metal spikes on roads, arrested journalists and TwitterIndia joined in by banning handles critical of the government. In order to vacate the farmers site, the government had also stopped the essential supply of water and electricity at the protest sites.

The protesters had organized a tractor parade in Delhi on the Republic Day as part of the protests, which led to violent events in the national capital and the Red Fort.

On October 3, four farmers were mowed down by an SUV in Lakhimpur Kheri, allegedly by Union MoS Ajay Mishra’s son Ashish Mishra. At least 8 people, including four farmers and a local journalist, died when a jeep ran over the peaceful farmers. The Minister has repeatedly said that his son is innocent and evidence is available to prove he was not involved in the violence.

The Union Minister’s son was arrested on October 9 and continues to remain in jail. Apart from him, the police have also arrested 12 others accused in the case.