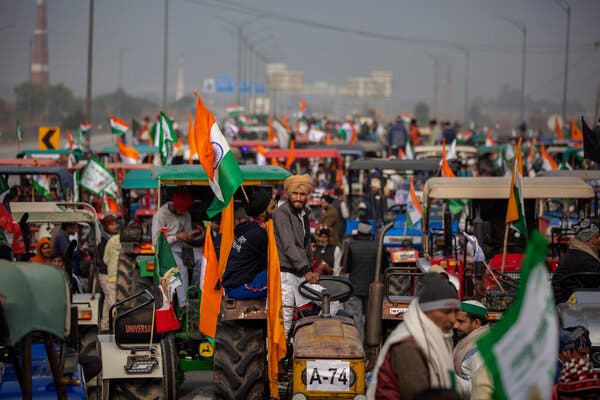 Farmers’ groups have alleged a conspiracy to their derail their peaceful movement after the city witnessed unprecedented violence on Republic Day. They say that some anti social elements had infiltrated their peaceful protest. Thakur Bhanu Pratap Singh, President of Bhartiya Kisan Union (Bhanu) said he is ending his 58-day protest as he is deeply pained by whatever happened in the national capital during farmers’ tractor rally.

Announcing the move, Rashtriya Kisan Mazdoor Sangathan leader VM Singh said his organisation is withdrawing from the farmers’ protest as he cannot take it forward with someone whose direction is different. He was referring to Rakesh Tikait, National spokesperson of Bhartiya Kisan Union (BKU) who has been named in an FIR. However, he asserted that this is the decision of Rashtriya Kisan Mazdoor Sangathan and not of AIKSCC (All India Kisan Sangharsh Coordination Committee).

Home Minister Amit Shah on Tuesday met with top security including Home Secretary Ajay Bhalla and Delhi Police Commissioner S.N. Srivastava to discuss security measures after Republic day violent clash between Delhi police and agitating farmers. Security has been beefed up in several places across Delhi especially at the Red Fort and farmer protest sites, with the deployment of additional paramilitary forces.

One protester died when his tractor overturned while ramming a road barrier at ITO, and scores were injured, as mobs resorted to violence and vandalism while forcing their way to the Red Fort and hoisting their flag there. As the night fell, the Red Fort was secured, the flags removed and protesters made to vacate the premises.

After two months of peaceful protests on Delhi’s borders and 11 rounds of negotiations with the central government, the Republic Day tractor parade turned violent on Tuesday. One protester died when his tractor overturned while ramming a road barrier at ITO. Farmers have accused Punjabi actor Deep Sidhu of hoisting the Nishan Sahib, the sikh religious flag near the tricolor at the Red Fort. This act has sparked outrage and drawn criticism from across the nation. The social media is flooded with photos and videos of the armed protesters storming the 400-year-old Mughal monument. Sidhu was last seen at Red fort which became the epicenter of the chaos that shook the national capital. As the night fell, the Red Fort was secured, the flags removed and protesters made to vacate the premises.