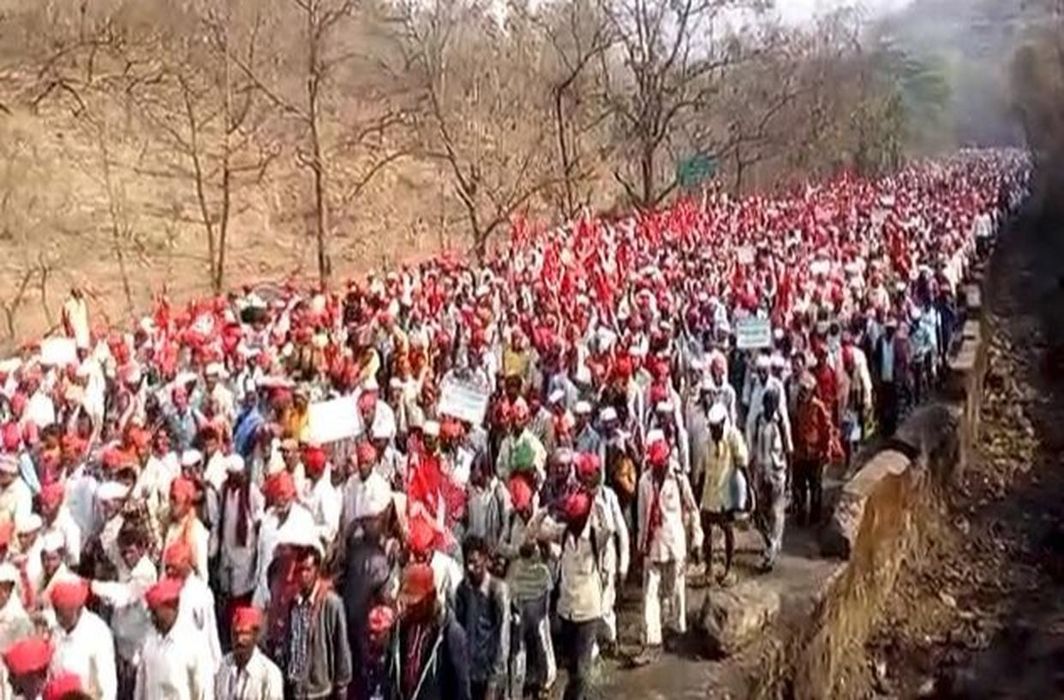 Around 50,000 farmers are marching to Mumbai, intending to gherao the Vidhan Bhavan, or state legislative assembly, to press for their demands that include implementation of Forest Right Act 2008, Dr Swaminathan commission report for fair prices to farmers and complete loan waiver.

The farmers who started on a long march from Nasik on March 6 had reached Shahapur area of Thane district on Thursday, according to media reports. They are planning to reach Mumbai by Sunday evening. On Monday, they plan to block access to the state legislature building.

Importantly, the budget session of the state legislature is underway.

President of Akhil Bhartiya Kisan Sabha, Ashok Dhavale was quoted in media reports as saying: “Farmers have been betrayed by the BJP-led government. They in large numbers are marching towards Mumbai to press their demands. We will not break our gherao in Mumbai unless our demands are fulfilled.”

Dhavale said that the Forest Right Act has been passed in the parliament in 2008, but this has not been properly implemented.

Farmers in the state, struggling to cope with the agrarian crisis and natural calamities, are demanding the proper implementation of the loan waiver package announced by Chief Minister Devendra Fadnavis in 2017, the implementation of recommendations of the Swaminathan Commission, and protesting the government’s ‘anti-farmer policies’.

“The state government declared a loan waiver package, but 1,753 farmers have committed suicides [since then] because it has failed miserably because of poor implementation,” Ajit Nawale, state general secretary, ABKS was quoted as saying.

The ABKS also wants farmers in the state to be given Rs 40,000 per acre as monetary assistance for crop damage because of last month’s hailstorms and unseasonal rains, said media reports. The march is being held to provide relief to distressed farmers, Nawale added.

The ABKS was part of the steering committee of farmers’ outfits that started unprecedented strikes last year. The protests forced the state government to announce a Rs34,022 crore farm loan waiver scheme. This time, the ABKS has decided to take on the government on its own.

The organisation also wants the state to implement recommendations of the Swaminathan Commission, which include better minimum support price for farm produce. It also wants pending electricity bills to be waived and power restored where it has been cut, among other things.

Maharashtra has been seeing multiple farmer agitations, said media reports The Nationalist Congress Party, led by Sharad Pawar, has also been holding agitations against the state government. It concluded the third leg of its Halla Bol Andolan in Jalgaon, north Maharashtra, recently. The party has organised similar stirs in Vidarbha and Marathwada in the past three months.