Home Latest Politics News Farmers mega rally in Delhi gets help and support from others, unites... 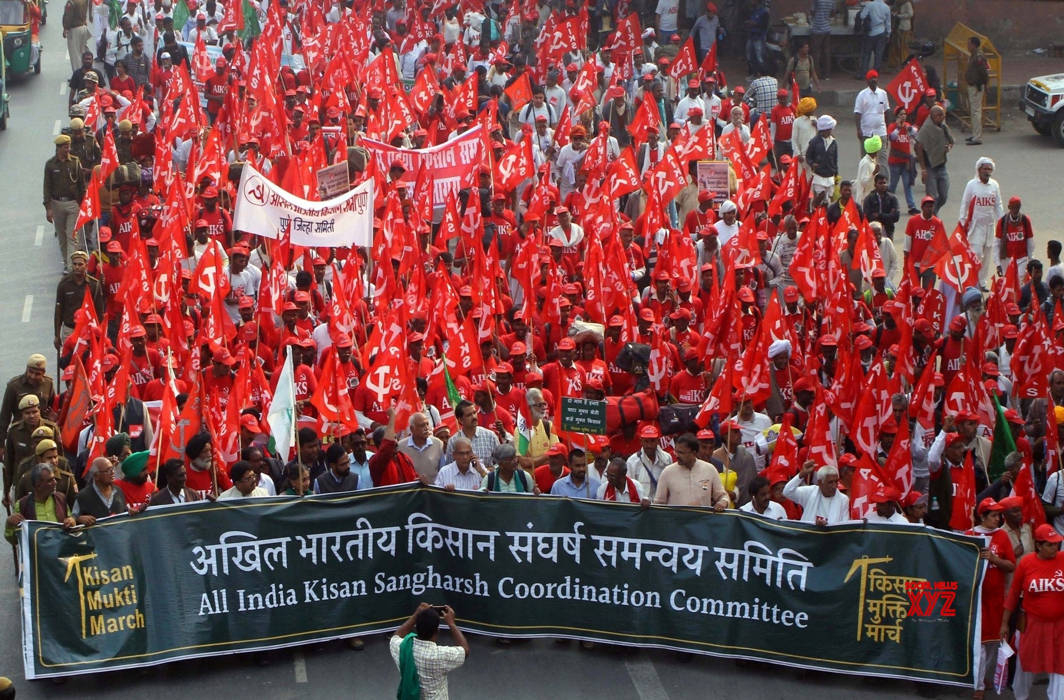 Thousands of farmers from all over the countrychanting “Dilli Chalo” descended on the national capital to take out a ‘Kisan Mukti March’ to the Parliament today (Friday, Nov 30) demanding a special session of Parliament to address their demand for implementation of Swaminathan Committee report, including remunerative prices for their produce and loan waiver, and address farm distress.

The police stopped them at the Parliament street where several Opposition leaders came to extend their support. This followed a groundswell of support from various sections of people in Delhi, including students, doctors, ex-servicemen, lawyers and others who extended their help through food, medicines apart from moral support by joining in the march.

The All India Kisan Sangharsh Coordination Committee (AIKSCC) claims that the rally is “one of the largest congregations of farmers” in the national capital in recent times. Many were stopped at the Delhi border as the police did not allow their tractor-trolleys to enter the city.

Swabhimani Shetkari Sanghatana leader and Member of Parliament Raju Shetti, who is also a part of the AIKSCC, introduced two Private Member’s Bills in the Lok Sabha in 2017, seeking a loan waiver and a guaranteed remunerative prices for agricultural commodities based on the recommendations of the Swaminathan Commission. The AIKSCC, which represents over 200 farm outfits, has demanded the Bills be discussed and passed in Parliament.

Social activists, including Medha Patkar and noted journalist P Sainath, extended their support to farmers and said the situation of farmers in the country has deteriorated to a level like never before.

Several prominent writers, intellectuals and artists, including Nayantara Sahgal, Ganesh Devy, Damodar Mauzo and K Satchidanandan expressed solidarity with the farmers. The group came together under the “Artists for Farmers” banner and joined the farmers entering Delhi from four different directions and spent the night at the Ramlila Maidan with the farmers.

Veteran journalist P Sainath who spent time with the farmers last night pointed out to what he called a larger agrarian crisis. “What you are witnessing in the country is bigger than a drought. The farm suicide data has not been published in the last two years. The figures stopped at 2015,” he told NDTV.

Tens of thousands of farmers, some carrying skulls of those who committed suicide, marched towards parliament demanding loan waivers and better prices for their produce. There were farmers, young daughters whose fathers preferred suicide over living under a debt, widows who lost their husbands to the farm crisis and tribals whose lands were snatched in the garb of commercialisation.

A group of women from Telangana, whose farmer husbands committed suicide, hung pictures of their men around the neck as they marched on the streets of Delhi.

Nearly 35,000 marching farmers were stopped near the Parliament Street Police station. Farmer leaders addressed the protesters there after they were not allowed by the police to proceed further.

Yogendra Yadav of Swaraj India led a 26-km protest rally from Bijwasan to Ramlila Maidan on Thursday. Farmers from Odisha, Haryana and Rajasthan joined him. “We are protesting loot and exploitation of farmers. The entire country is with us. Journalists, doctors, students, artists have pledged their support,” he said.

The AIKSCC, the umbrella body for farmers’ groups, demanded a special session of parliament to pass bills seeking a loan waiver and better prices for crops. It has also written to Prime Minister Narendra Modi to join the protest march. Today’s rally is the fourth major farmers rally led  by the organisation in the last year and a half, which represents over 200 groups.

The massive turnout today attracted leaders of political parties who joined hands in extending their support to the farmers at Jantar Mantar.

Congress president Rahul Gandhi said India currently faces two challenges: the bleak future of its farmers and unemployment of its youth. He said that if Prime Minister Narendra Modi could forgive the debt of 15 industrialists, he is duty-bound to do so for the country’s farmers too.

“Leaders of all parties are sitting here. We have different ideologies, but we are united for the future of this country, its youth and its farmers. Modiji speaks on behalf of business magnates like Anil Ambani. Any govt that insults the youth and farmer of this country will be thrown out. We stand with you. We are ready to do whatever you want, even if that involves changing law. This country is not run by an individual, it’s run by you, its countless farmers who toil dawn till dusk.”

Further targeting PM Modi, he said, “There are two issues facing this country today -unemployment and the farm crisis. In the last four years, the Modi govt has waived debt with Rs 3.5 lakh crore of 15 businessmen. If that can be done, it is also possible to waive the loan of our farmers. The farmers are demanding their rights, they aren’t seeking any favours.”

“The farmers are only seeking their right, but all their money instead goes into Anil Ambani’s pockets. You get nothing but empty speeches,” he added.

“We stand with you. We are ready to do whatever you want, even if that involves changing the law,” Rahul Gandhi told farmers at Parliament Street.

CPI(M) general secretary Sitaram Yechury alleged that agricultural growth rate has plummeted under the Narendra Modi government, and termed the Prime Minister as a “pocket-maar who takes all your money and gives back a little as a sop”.

“The BJP’s brahmastra is the Ram mandir. They rake it up every five years, but we will have to tell them that today the marginalised, the workers, the farmers are all united. They misuse the name of Ram for votes,” Yechury said.

“They talk of Ramayan, but forget about Mahabharat. Does anyone remember more than two Kauravas? Just like that only Narendra Modi and Amit Shah are visible,” he said, referring to Duryodhan and Duhshasan but refraining from naming them.

Aam Aadmi Party president Arvind Kejriwal wondered why the centre was treating farmers in such a step-motherly fashion.

“Your Bima Yojana for farmers is a fraud. Thousands of crores are taken from farmers’ accounts, but when the crops are destroyed, conditions are cited. This is not a Bima Yojana, this is the BJP’s daka yojana (dacoit scheme),” he claimed.

Representatives of 21 political parties, including opposition leaders like Rahul Gandhi, Sharad Pawar, Sitaram Yechury, Farooq Abdullah and Sharad Yadav, got together on the stage at the massive gathering.

However, BJP leader Sambit Patra scoffed at the movement. “Having Rahul Gandhi and Arvind Kejriwal on the same stage only means having drama and confusion on the same stage. Uniting won’t help these individuals, who have lost the people’s support,” he said.

A day before the march to Parliament, Ramlila Maidan was a sea of red as farmers wearing caps and flags gathered, with some of them arriving here after completing a long journey of as long as 36 hours. The Maidan resonated with slogans of ‘Ayodhya nahi, Karza maaf chahiye (We don’t need Ayodhya but loan waiver)’.

Police had made elaborate arrangements for the rally, with at least 3,500 personnel deployed along the route. A rope on both the sides of the marching farmers with the police walking along with them ensured traffic was not stopped.