Both CAA and the farm laws had been cleared in Parliament though people were vehemently opposed to it. Saheen Bagh protestors were looking for a stay but what they got in return was being labelled anti-national, tukde tukde gang, etc. and being hauled to jail. 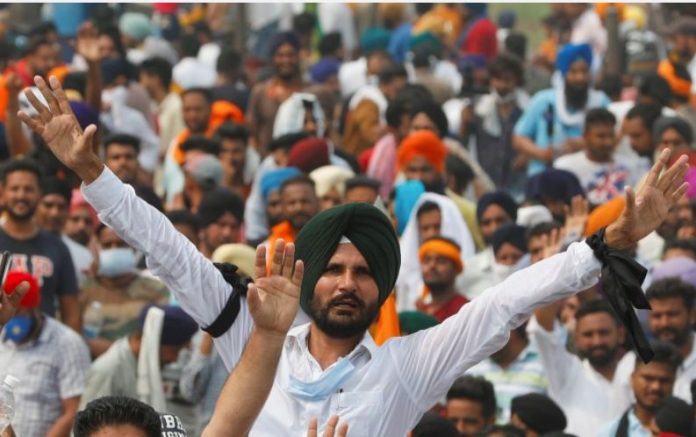 Farmers from Punjab, Haryana and a few other states have been camping at the borders of Delhi against the Narendra Modi government’s farm laws passed by Parliament in September. The farmers have only one item on their agenda – repeal the laws. The protesting farmers have blocked several entry points that connect Delhi, Haryana and western Uttar Pradesh.

Roughly around the same time last year, Road Number 13A of Shaheen Bagh, which connects Noida to Delhi and to Faridabad, was blocked by people protesting against the Citizenship (Amendment) Act. The law granted citizenship to residents of neighbouring countries by amending the citizenship law of 1955 and making the option available only to non-Muslims.

They may both be popular upsurges against the Modi government’s decisions (nobody could count the protesters when everyone stood in an unending lines after Demonetisation) but there are fundamental differences between the two protests. So much so that an advocate told the Supreme Court hearing, which ended in the setting up of a committee, that farmers’ protest cannot be compared to Shaheen Bagh since the protest was more patriotic. It was not reported if the lawyer was asked to explain his statement by either the court or other lawyers.

Farmers say the new laws will leave them at the mercy of market forces, destroy small farmers who cannot compete and threaten food security. The issues being losing livelihood, food security. In Shaheen Bagh, the fear was the protesters would be deemed stateless, therefore the gnawing terror that citizenship will be snatched away. The protesters at Shaheen Bagh were fighting for what they perceived was a challenge to their enjoying the citizenship of this country, given the rumour which was actively promoted that the National register of Citizens will kick in after the CAA.

Last year, as the Centre passed the Citizenship Amendment Act, thousands of Indians across the country took to the streets and staged protests against the citizenship law. From big cities and university campuses, the movement spread to small towns and villages.

The one common factor in both the CAA and the farm laws was that the law had been cleared in Parliament though people were vehemently opposed to it. But here are the differences between the protests:

1) The Sikh-Muslim factor
Sikh farmers are the most visible faces of the protests while last year, it was the elderly Muslim women of Shaheen Bagh, who became the representatives of the anti-CAA protests. This year, it is the turbaned, bearded farmer from Punjab, Haryana and western Uttar Pradesh. When the anti-CAA protests flared up, the prime minister had suggested that the protesters could be identified by their clothes. The protest site at Shaheen Bagh had become a cause celebre, but stuck to images of unity, brotherhood and harmony and owing all allegiance to the Constitution of India.

There were counter protests in support of citizenship law, with slogans like ‘desh ke gaddaro ko, goli maaron saalon ko’ raised by Union MoS Finance Anurag Thakur in the run-up to the Delhi ssembly elections in February. When farmers marched to Delhi, the BJP elements were quick to brand them “Khalistani terrorists” which was again reported in the Supreme Court too.

A popular conspiracy theory did the rounds that a woman in Punjab was really Bilkis Bano, who became the star of Shaheen Bagh and was now allegedly protesting for a fee. Some suggested that the Sikh farmers were really Muslims in disguise.

Farmers marching towards Delhi had to cross barricades created by police who dug up roads and laid barricades to make it difficult for them. And the protesters were dispersed with water cannon, tear gas and lathis. For the anti-CAA protesters, Delhi Police ransacked Jamia Millia Islamia and its library, thrashing students at will.

2) Talks and crackdowns
After some initial clashes between farmers and the police, the government has invited the farmers for talks. But in case of Shaheen Bagh, there were no talks between the protesters and the government. The police of Delhi and Haryana treated the farmers in the same way as the Shaheen Bagh demonstrators and anti-CAA protesters were treated. While tear gas, water cannon and lathis rained on protesters, only those at Shaheen Bagh were reported for sedition and conspiracy.

A year after passing the law, the government is yet to notify the rules and it is not clear how many people will be able to prove both religious identity and religious persecution in neighbouring countries to gain citizenship. But it is a nod to Hindutva, where India is the natural home for Hindus, a Hindu society which must close its ranks against the Muslim other.

4) Interlocutors and the Expert Committee

The 101-day protest at Shaheen Bagh had its share of critics, including thousands of commuters who used Road 13A to commute between Delhi and Noida daily. Even though it was not protesters who had blocked the road but the police barricading, the important Delhi-Noida link was disrupted, leading to massive jams across the city. The Supreme Court appointed two interlocutors to speak to the protesters and ensure the road was cleared. The talks did not make any headway. Much later, in September, the Supreme Court observed that the right to protest in public places should be balanced with the right of the general public to move freely without hindrance.

After eight rounds of inconclusive talks between the government and the protesting farmers, the Supreme Court constituted a committee of four agricultural experts to hear the parties to understand the ground situation. The protesting farmers, who had not been keen to come to court, declared triumphantly that the experts named in the group are those who are in unequivocal support of the farm laws. Thus proving their worst fears that the government will try to circumvent the protests against the farm laws via the judiciary.

5) The last difference and this is a BIG one

The farmers wanted the three farm laws to be repealed, they haven’t got that yet. But they got a stay even when they didn’t want to approach the courts. The protesters at Shaheen Bagh, on the other hand, went to the courts, in the belief that each organ of State will work as thought up by the makers of modern India. They went looking for a stay on the operation of the Citizenship Amendment Act, they didn’t get that but what they got in return was being labelled anti-national, tukde tukde gang, etc. and being hauled to jail.

If not for the pandemic outbreak, we wouldn’t have known how the Shaheen Bagh protest would have ended. Maybe it would have gone on. But the repeated requests by the authorities to protesting farmers to send their elderly, the women and children back home, points to something else. With the repeated references to the threats posed by the protesters, Khalistani or otherwise, in the Supreme Court, the path ahead could well be what former Supreme Court judge Markandey Katju fears as explained in his letter to the prime minister.