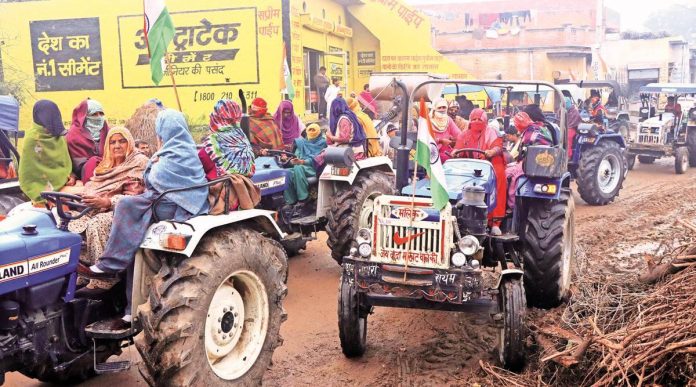 The protesting farmers are all set to organise a tractor rally on Republic day as a part of their protest against the centre’s contentious farm laws. The Centre had approached the Supreme Court against the proposed event seeking an order of Injunction restraining any protest march on Republic day. The Centre in its application said any protest on January 26 may cause disruption to the Republic day celebrations which will be an embarrassment to the nation. To which the Top Court on Monday responded that the entry of protesting farmers into Delhi has to be decided by the Delhi Police as it is a matter of law and order. Thousands of farmers had organised a tractor rally on January 7 on the Eastern and Western Peripheral Expressways as a rehearsal programme for January 26.

The three-judge bench, headed by Chief Justice of India (CJI) Sharad Arvind Bobde, said the Court is not the first authority to grant entry to protesting farmers in the national capital on Republic day. Delhi Police is at liberty to take decisions as to who is to be allowed as who is not to be allowed. This is the matter of law and order, Chief Justice Bobde added.

But the Solicitor General Tushar Mehta said the situation is extraordinary and court may pass orders.

Meanwhile, a Farmers leader at Singhu border have assured that the rally in which 1,000 tractors will participate- will be peaceful and won’t interrupt Republic day parade at Rajpath. The 50-km parade will be held in the Outer Ring Road, he added.

The farmers from Punjab, Uttar Pradesh, Haryana and across the country have been protesting at the Delhi borders against the Centre’s new farm laws since November 26, 2020. Despite several rounds of talks, the deadlock between the government and the protesting farmers have not been resolved. The farmers are not ready to step back. The farmers argue that they would settle for nothing less than total scrapping of the legislations as the laws will shrink their income and place them at the mercy of big corporates.