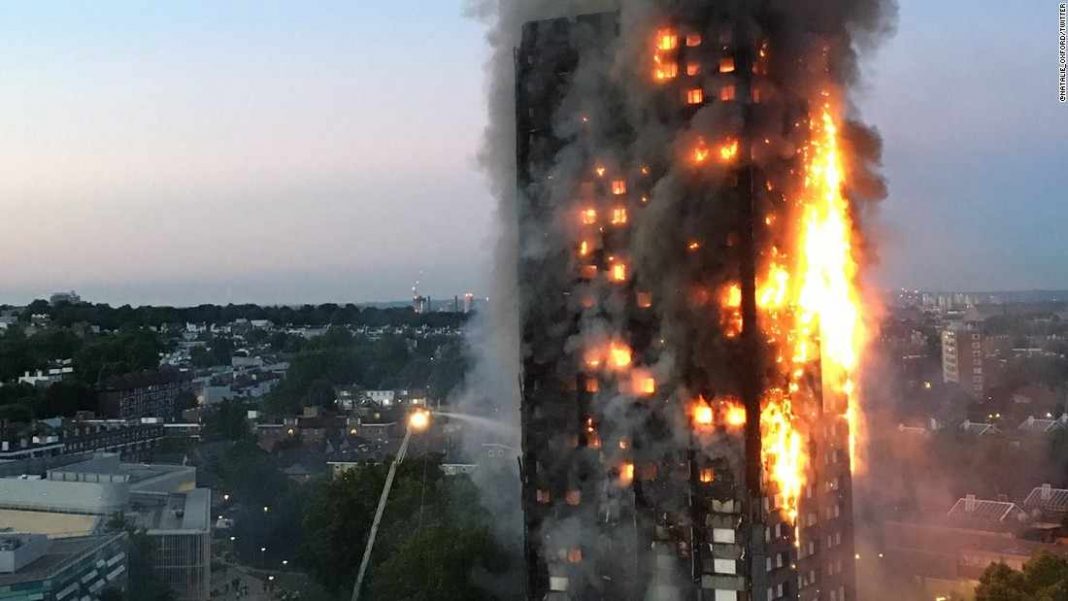 A massive fire blazed through a 27-storey apartment block in Lancaster West Estate, London, in the early hours of Wednesday. There is no report of any casualties yet. However, images of the burning building indicate it is one of the most dangerous fire accidents London has witnessed in recent history.

The fire was reported from the second to the top floor of the building. Its cause is unknown.

The blaze was first reported at 12.54 am when many residents were asleep. Some reports indicate that the building was recently refurbished and there were fewer occupants. About 4 am, police reported that “residents continue to be evacuated from the tower block”.

The fire brigade said 40 fire engines and 200 firefighters had been called to control the blaze in the Grenfell Tower, having 120 residential units. An unmanned hydraulic platform was seen shooting water at the side of the building up to the 10th floor.

Fire Brigade Assistant Commissioner Dan Daly said the firefighters were working extremely hard. “This is a very serious incident and we have deployed numerous resources and specialist appliances. However, one of the firefighters said they had not been able to tackle the flames on the higher stories,” Daly said.

The fire continued to burn even after five hours. An ambulance service said that 30 people had been taken to five hospitals. An eyewitness was quoted as saying, “It’s the most terrifying thing I’ve ever seen. I just hope they have got everyone out.”

Some people were seen shouting for help from their windows on the upper floors. One of the residents living across the road said she was awakened by sirens and thick smoke that filled her home as well. Another neighbour said that he feared the building could collapse. He said he heard sirens, helicopters and shouting and even saw the building engulfed in flames. Andy Moore, a witness, added, “We’ve seen debris falling from the building, we’ve heard explosions, we’ve heard the sound of glass breaking. The police keep pushing back their cordons, push back members of the public for fear the building might collapse.”