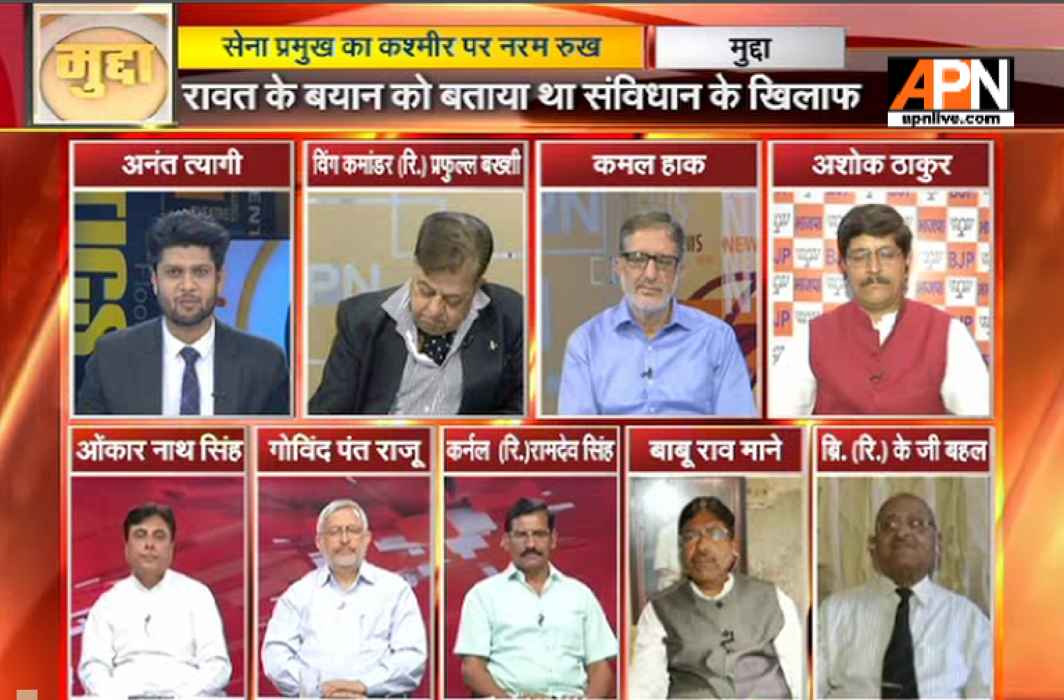 Anchorperson Anant Tyagi asked Thakur what the government’s policy was?  Thakur said Gen Rawat has been consistent and the youth will realise that the way ahead is through talks and dialogues.

Wing Commander Bakshi said: “Gen Rawat has been talking about dialogue. That does not mean that he is suggesting a soft approach towards militants. This is a case of selective reporting.”

Col Singh said: “In Kashmir, the army is getting its directive from the Centre.”

Brig Behl said: “Our chief has said ‘we are ready for talks’. That does not mean that we are weak.”

Omkar Nath Singh said: “There’s nothing wrong in talks. Gen Rawat’s statement is meant for the youth. Kashmir has the largest number of unemployed youth; two thirds of youth there are unemployed.”

Haq said: “Kashmir problem is not linked with unemployment. If it’s Gen Rawat’s personal opinion, then he has over-stepped his mandate. If that’s the government line, he should know that talks and militancy don’t go together.”

When asked by Anant who should Gen Rawat (or the government) talk to, Thakur said: “There’s nothing wrong with Gen Rawat’s statement, it’s a general statement. It shows that the BJP is on the right track.”

Mane said: “Talks are with friends, and with humane people. Talks can’t be with militants.”

Raju said: “It’s clear the government wants to open the channel for talks.  Gen Bajwa’s statement is in view of the general collapse in Pakistan.”

Anant wanted to know who the government will talk to.

Wing Commander Bakshi said: “Talk can only be between both the governments.”

Thakur said: “What is the reason to see a different interpretation in the Indian Army Chief’s statement? Gen Rawat was talking to a select audience at a social programme.”

Haq said: “Kashmir is a bilateral issue. In the past, interlocutors have been appointed, but no solution has emerged. This is because the requirement is to first end militancy in Kashmir , then de-radicalise the society, and then bring in an agenda for the youth. Militants should be treated like the enemy of the country, and no mercy should be shown to them. I have seen murders in my family. You are debating; I am suffering.”

Bakshi said that first doctrine should be clear. “If someone pelts stones, should he be seen as a militant or some berserk youth?”

Wing Comm Bakshi said: “The Kashmir issue is too complex. Gen Rawat is not hinting at a soft approach. Business has been affected in Pakistan, and that’s why Gen Bajwa stated that dialogue can be the way out.”

Col Singh said: “The army has been working hard in Kashmir to ensure that Kashmiri pundits feel safe. It’s still work in progress.”

Wing Comm Bakshi said: “Our policy is clear. We should wait for the PM’s statement now.”