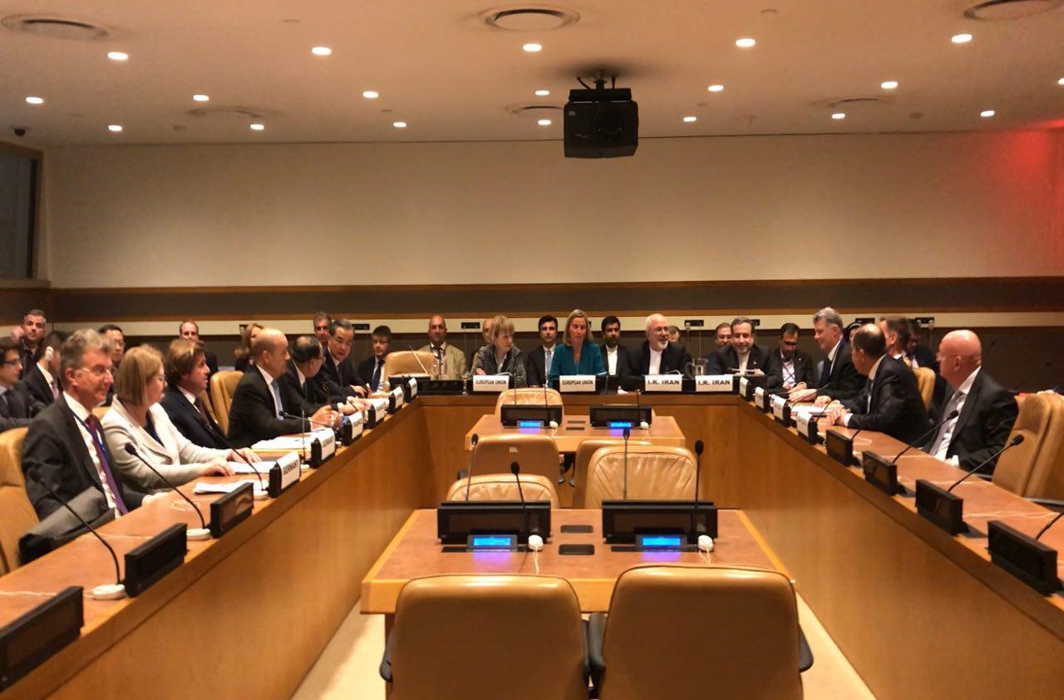 Disgruntled with US President Donald Trump’s pressure to isolate Iran, Washington’s traditional allies including France, UK and Germany plus Russia and China have promised to establish a ‘special purpose vehicle’ to facilitate payments for Tehran’s exports.

The ministerial level representatives from the remaining parties of the 2015 Iran nuclear deal, also known as JCPOA, met with Iranian foreign minister Mohammad Javad Zarif at United Nations headquarters in New York on Monday as part of their efforts to salvage the deal.

According to Tehran based Press TV. Federica Mogherini, the Chief of  European Union’s Foreign Policy and Iranian Foreign Minister Mohammad Javad Zarif held a joint press conference to elaborate on the results of a meeting between the remaining parties of JCPOA, namely France, the UK, Germany, Russia, China, and Iran.

According to a joint statement issued by the participants and read out by Mogherini and Zarif during the press conference, the meeting “took stock of the process of finding and operationalizing practical solutions for issues arising from the unilateral withdrawal of the US from the agreement and the re-imposition of the sanctions lifted under the JCPOA and its Annex II.”

The statement further said, “Mindful of the urgency and the need for tangible results, the participants welcomed practical proposals to maintain and develop payment channels, notably the initiative to establish a special purpose vehicle to facilitate payments related to Iran’s exports, including oil, and imports, which will assist and reassure economic operators pursuing legitimate business with Iran.”

It said, “The participants reaffirmed their strong will to support further work aimed at the operationalization of such a Special Purpose Vehicle as well as continued engagement with regional and international partners.”

The statement said that the participants also “welcomed the fact that updates to the EU’s “Blocking Statute” and the European Investment Bank’s external lending mandate to make Iran eligible entered into force on 7 August.”

Iran’s official news agency IRNA reports from New York that the ministerial meeting of Iran and P4+1 was held in the United Nations to discuss the problems faced with implementation of the nuclear deal following US unilateral withdrawal. Before the US withdrawal, the deal used to be known as P5+1 deal, having five permanent members of UN Security Council plus Germany as its signatories.

In May this year, the US President Donald Trump had announced Washington’s withdrawal from the multi-lateral deal. Since then US is working to re-impose its sanctions on Tehran and push the world to cut trade with Iran. First layer of sanctions were imposed in early August while the second layer of tougher sanctions are scheduled to be imposed on November 4.

According to Iranian media reports, the EU has already offered Iran a support package to compensate for the US pullout, which obliges the European Investment Bank to support EU firms willing for trading with Iran.

The participants in the Monday New York meeting have also recognized that “Iran has continued to fully and effectively implement its nuclear-related commitments as confirmed by 12 consecutive reports by the International Atomic Energy Agency (IAEA), and reiterated the need to continue to do so.”

The Participants said they will continue to support the modernization of Iran’s Arak nuclear research reactor as part of the JCPOA and the conversion of the Fordow facility in a nuclear, physics, and technology centre.

The meeting between the remaining parties to the Iran nuclear deal came after bilateral talks between Zarif and Mogherini, during which the latter said Europe is finalizing its offers to meet Iran’s demands in a bid to save the deal.

Earlier this month, Bahram Qassemi, the spokesman for Iran’s Foreign Ministry had noted that the offers made by Europeans to save the deal had so far failed to meet Tehran’s expectation. However, he said that Tehran was still hopeful Europe could convince it to remain in the deal.