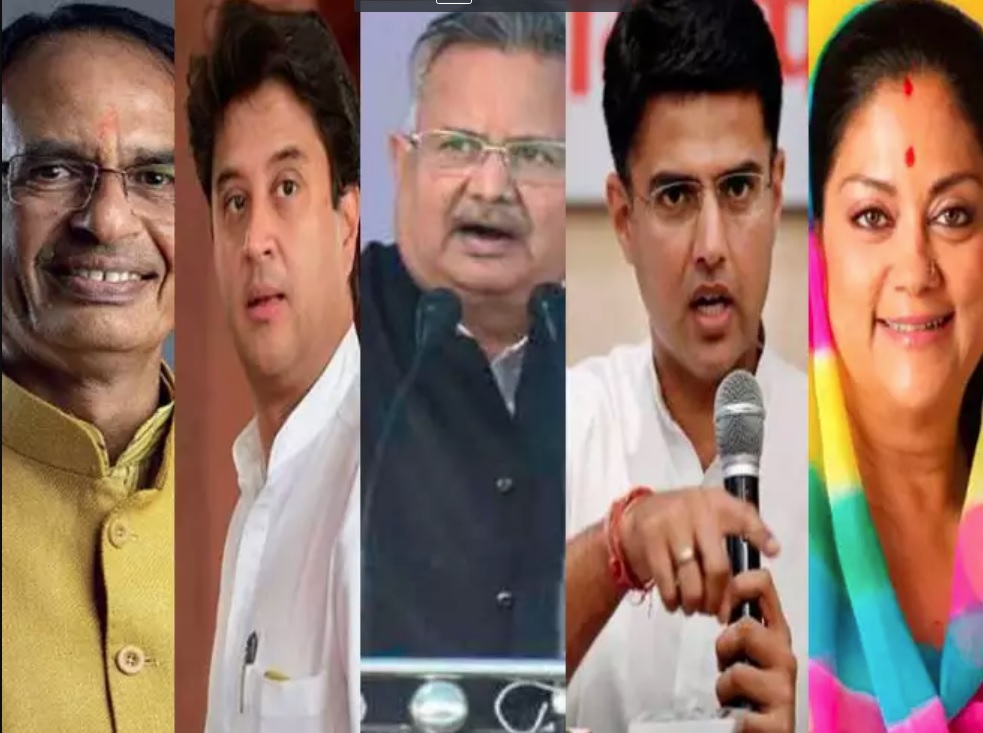 While the final results would come in, in an hour or so, the trends are clear and some broad conclusions can be drawn from the available facts.

First and foremost, the BJP is nowhere near achieving Amit Shah’s declared aim of a ‘Congress-mukt Bharat’ (Congress-less Bharat). Rather, in a belt cutting across the middle of India’s map, it is the BJP that got a bloody nose and lost out to the grand old party in a direct contest. The Congress is, thus, very much in the game.

The elections also signify the erosion of ‘Modi magic’ and the halt of the ‘wave’ that BJP has been raucously shouting about.

These were state elections, and local factors – especially the fact that BJP had been in power in Rajasthan, Madhya Pradesh and Chhattisgarh, three terms in a row in the latter two – mattered heavily. However, Prime Minster Narendra Modi’s hectic campaigning in all these states put his own status at stake. Not only was he projected as the ‘winning factor’ by the BJP, he himself went around declaring that it was a contest between ‘naamdar’ (referring to Rahul Gandhi, implying he owes his status to his family’s name) and ‘kaamdaar’ (Modi himself).

Taking him at his own word, Modi has been made to bite the dust.

Congress president Rahul Gandhi has reasons to be happy. His critics had often mocked that the Congress under him has never won any election. These results have wiped out that ‘stigma, and how!

The results boost the Congress morale but, going by the nature of the party, that is about all. It is not likely to learn any lessons. Rather, the results may also boost the ‘negatives’ in the party. Essentially – and increasingly – opportunist now, it could become more convinced about going the ‘Hindutva’ way.

The Congress may also become less accommodating to allies and hamper the formation of an alliance against the BJP for the 2019 Lok Sabha elections.

Belying every analyst and pollster’s prediction, the Congress is way ahead of BJP in Chhattisgarh, with a 10 per cent lead over BJP in vote share (43% against 33%).The biggest casualty in this tribal state is Ajit Jogi, whose Janta Congress Chhattisgarh failed miserably in making an impact and didn’t even get into double digits in an assembly of 90.

In Rajasthan, again, the trends do not match the forecasts. While the Congress is ahead, the BJP has not done very badly – despite palpable anti-incumbency factor against the Vasundhara Raje government. The Congress managed a slender majority rather than the landslide win many had expected. The Congress vote share was 39.1% against BJP’s 38.6% – a margin of only 0.5%.

In Madhya Pradesh, the Congress edged ahead of BJP in a close, see-saw contest and was past the midway mark of 115 – with leads in 117 seats at 5pm. A party needs 116 seats for a majority in the 230-member assembly. In terms of vote share, the BJP and Congress were tied at 41.4% each.

In Telangana, Telangana Chief Minister K Chandrashekhar Rao’s (KCR) Telangana Rashtra Samiti (TRS) was headed for a thumping majority. KCR’s gamble to call for early elections has paid off and the state has stayed with the party credited for its formation. TRS has its candidates ahead in nearly 90 constituencies with a vote share of 47.1%.

The BJP contested the state alone with the TDP walking out of National Democratic Alliance earlier this year. People’s Front ally TDP is heading in one and Owaisi’s AIMIM that backed TRS in five.

In Mizoram, the regional Mizo National Front has dislodged the Congress government.

MNF president and former Mizoram chief minister Zoramthanga, who ran the state between 1998 and 2008, was reported by NDTV as saying, “I have a strong belief that I don’t need any other party and particularly the BJP to form government.”

The state with a population of about 10 lakh is seen by the BJP as the “final frontier” in the northeast as it is in power in all other states of the region — either by winning polls or aligning with regional parties.

The MNF, which has been out of power for 10 years, has been optimistic about the win. Their hope is hinged on the history of the state where governments change every 10 years.