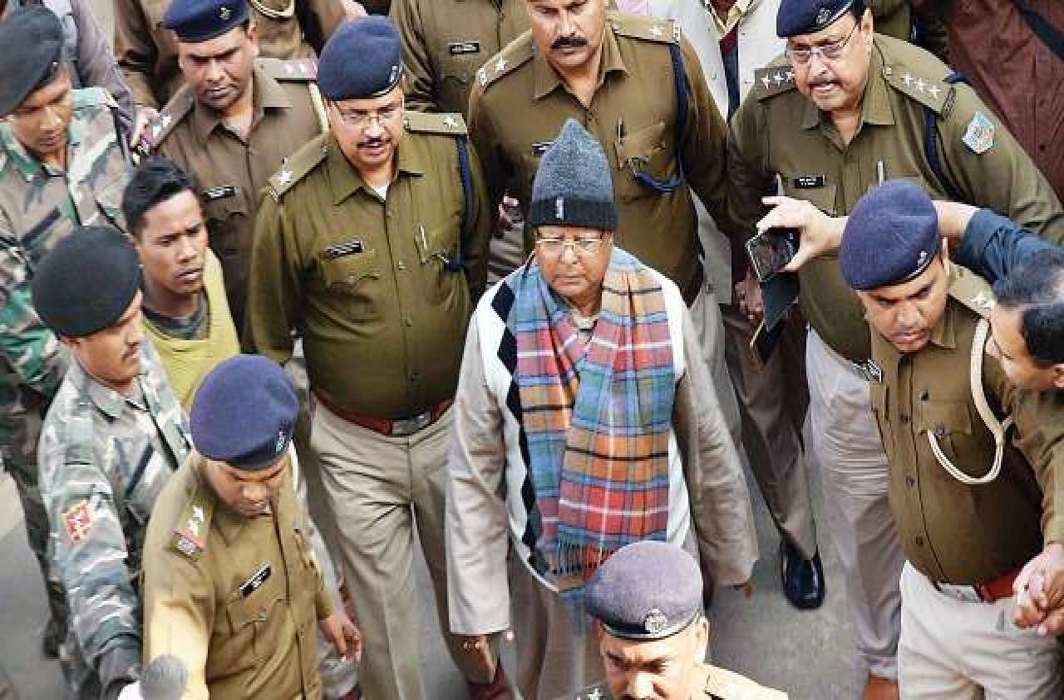 Weeks after he was sentenced to serve three and a half years in jail in a case linked to the fodder scam, RJD chief Lalu Prasad Yadav was on Wednesday (January 24) found guilty in the Chaibasa Treasury case – also linked with the overarching fodder scam – and sentenced to five years in prison.

Another former Bihar chief minister, Jagannath Mishra, has also been held guilty of the swindle by the special CBI court in Ranchi and sentenced to a five-year jail term.

With the latest verdict, Lalu now stands convicted in three cases linked to the fodder scam while trial is on in two other cases against him and several other accused, including politicians and bureaucrats.

The RJD chief’s son Tejashwi Yadav has termed the conviction as “political vendetta” and said that an appeal will be filed against both the verdicts – Lalu was sentenced to 3.5 years jail term in the Deoghar Treasury scam on January 6 – in higher courts. Tejashwi added that the BJP, RSS and Bihar chief minister Nitish Kumar have conspired against Lalu to ensure his conviction in these cases that had come to light over two decades ago.

On Wednesday morning, the special CBI court of judge SS Prasad had announced a guilty verdict against Lalu, former Bihar Chief Minister Jagannath Mishra and 48 other accused in the Chaibasa treasury case while it acquitted six others. However, unlike previous instances when the courts had declared the accused guilty but set a separate date for pronouncing the quantum of punishment for them, Judge SS Prasad decided to declare the verdict and the sentence within hours of each other.

The latest case pertains to the fraudulent withdrawal of Rs 33.67 crore against an allocation of Rs. 7.10 lakh from the Chaibasa (now in Jharkhand) district treasury in 1992-93. Out of a total of 76 accused, 14 died during the trial, three turned approvers, two pleaded guilty and one is still absconding. Of the 54 who faced the trial, six are politicians, three former IAS officers, six Animal Husbandry Department officials, one treasury official and 40 suppliers to the department.

Earlier this month, Lalu and seven others had been convicted in the Deoghar Treasury case for fraudulent withdrawal of over Rs 89 lakh from the said treasury between 1991 and 1994. Besides the 3.5 years jail terms, each of these convicts had also been slapped with a fine of Rs 5 lakh. The first case linked with the fodder scam in which Lalu was found guilty back in 2013 was also related to fraudulent withdrawals from the Chaibasa treasury. That case had cost Lalu his seat in the Lok Sabha and he was sentenced to five years in jail although he managed to get bail from the Supreme Court after spending a little over two months in prison.

Lalu is currently serving a jail term at Ranchi’s Birsa Munda jail after being convicted in the Deoghar Treasury case. He had declined the special CBI court’s offer of lodging him in an open jail – a system where convicts are allotted independent cottages instead of being locked up in cells within prison premises and have other benefits like relaxed hours for meeting well-wishers, etc.

Two other cases related to the Rs 970 crore fodder scam – those linked to fraudulent withdrawals from the Dumka and Doranda Treasuries – are also in various stages on trial.

Jagannath Mishra who had served as Bihar chief minister for three terms – the last being in 1989-90 before Lalu assumed the office – was convicted in the first Chaibasa Treasury scam along with Lalu but was acquitted in the Deoghar Treasury case. The octogenarian leader, a former Congress heavyweight, had lost his wife Veena on January 22, just two days before the latest guilty verdict.