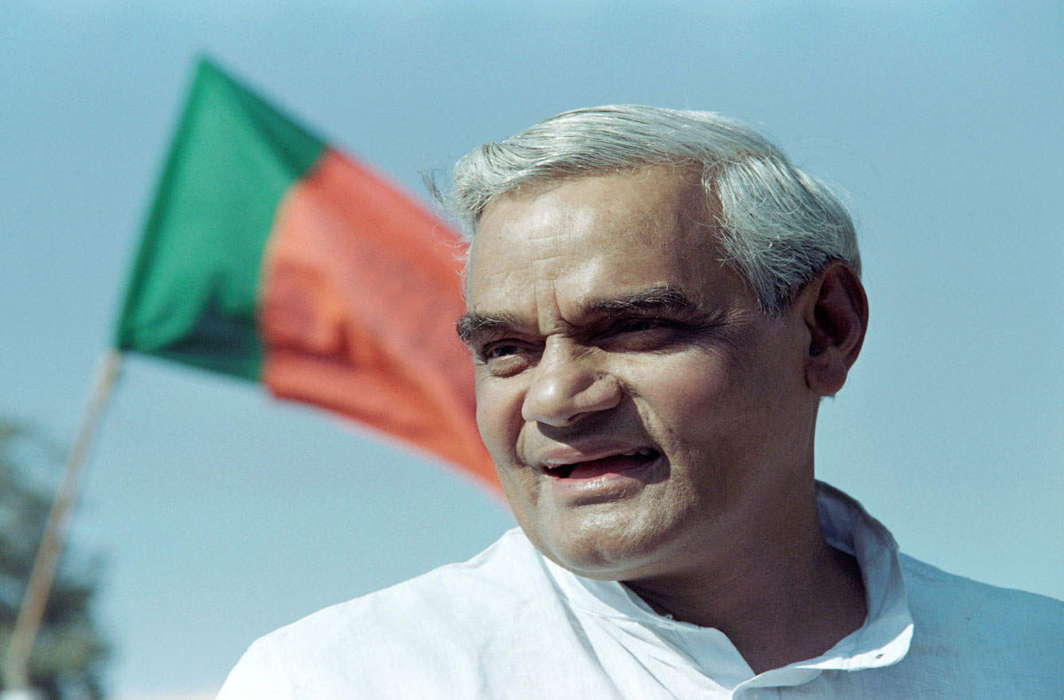 Former prime minister Atal Bihari Vajpayee was cremated with full state honours at Smriti Sthal on the banks of the Yamuna in Delhi after a host of dignitaries from the country and abroad paid homage to the departed statesman.

His adopted daughter Namita Bhattacharya lit the funeral pyre and the poet-politician was given a 21-gun salute. The tricolor wrapped around mortal remains of Vajpayee was handed over to his family.

The government has announced seven days of state mourning, and the national flag will be flown at half-mast for seven days across the country. A half-day holiday was declared in all offices of the central government, central PSUs and Delhi government. Schools in Delhi remained closed Friday.

The BJP postponed the two-day meeting of its national executive which was to start Saturday. New dates will be decided later. BJP general secretary Kailash Vijayvargiya said: “For the party, there will be no programme or major activity for at least seven days.”

Vajpayee passed away on Thursday after battling a prolonged illness at the All India Institute of Medical Sciences (AIIMS). He was 93. The charismatic leader is survived by his adopted daughter Namita Kaul Bhattacharya. The former PM’s body was kept overnight at his bungalow on Krishna Menon road, where he spent the last few years away from public life.

From there, it was taken with military honours to the to the headquarters of BJP, the party he had helped form in 1980, where scores of leaders, cutting across party lines, paid tribute to the leader through the day.

People from across the country gathered outside the BJP headquarters and hundreds lined up inside to pay homage to the former prime minister, who wove together pragmatism and a vision for an inclusive India.

Thousands of mourners jostled and some clambered on trees to capture the moment on their phones as former prime minister Atal Bihari Vajpayee’s cortege left the BJP’s headquarters.

A sea of people attended the funeral procession as his mortal remains were taken for cremation to Smriti Sthal located close to the memorials of former prime ministers Jawaharlal Nehru and Lal Bahadur Shastri on the banks of the river Yamuna.

Prime Minister Narendra Modi walked the entire four km stretch behind the flower-decked gun carriage, along with other top BJP leaders and ministers. “I am speechless, numb,” PM Modi had said, expressing his grief. “It’s like losing a father.”

The Delhi Police had made traffic arrangements for the funeral procession, imposing traffic restrictions on several roads.

The Union Jack was at half-mast at the British High Commission in New Delhi as mark of respect for Vajpayee.

“In the death of former prime minister Atal Bihari Vajpayee, India has lost a leader whose services to regional peace will be remembered for long time. He and Nawaz Sharif launched a sincere peace effort between neighbouring countries in 1999. Wish India builds on his legacy by giving peace a chance,” Shahbaz said in a tweet.

Calling Vajpayee’s death a “personal loss”, Prime Minister Narendra Modi said it marks the end of an era. He said the BJP patriarch lived for the nation and served it assiduously for decades while noting that it was Vajpayee’s exemplary leadership that set the foundations for a strong, prosperous and inclusive India in the 21st century.

“Atal Ji’s passing away is a personal and irreplaceable loss for me. I have countless fond memories of him. He was an inspiration to Karyakartas like me. I will particularly remember his sharp intellect and outstanding wit. It was Atal Ji’s exemplary leadership that set the foundations for a strong, prosperous and inclusive India in the 21st century. His futuristic policies across various sectors touched the lives of each and every citizen of India,” Modi tweeted. He said it was due to Vajpayee’s perseverance and struggles that the BJP was built brick by brick.

Former President Pranab Mukherjee, writing to Vajpayee’s foster daughter Namita, said: “A democrat to the core, Atalji dominated the Opposition space like a titan and led the government with aplomb. An inheritor and practitioner of the best traditions and qualities of leadership, in his demise the nation has lost a great son. An era that will forever be fondly remembered has passed away.”

Hailing Vajpayee as “a towering figure in our national life” who “stood for democratic values and demonstrated this commitment in all his acts, whether as a parliamentarian, a cabinet minister, or prime minister of India”, UPA chairperson Sonia Gandhi said “he was a spell-binding orator, a leader of great vision, a patriot to the core for whom the national interest was paramount. But above all, he was a man with a very large heart and a real spirit of magnanimity”.

Vajpayee was the first non-Congress leader since India’s independence in 1947 to complete an entire term in office as head of a BJP-led ruling alliance between March 1998 and May 2004. He was admired by friends and rivals alike for his rich oratory, his poetic jibes and his statesmanship.

Vajpayee was awarded India’s highest civilian award, the Bharat Ratna, in March 2015. During his second term as prime minister, Vajpayee ordered nuclear tests in May 1998 in a strategic masterstroke to blunt Pakistan’s nuclear ambitions. He followed this up with peace overtures to Pakistan, riding on the first direct bus from India to Pakistan in February 1999.

Vajpayee, who ruled the country thrice in the 1990s, had retreated from politics over the last few years because of his health. It was widely reported that the former prime minister had a stroke in 2009 that severely affected his ability to speak and confined him to his home.