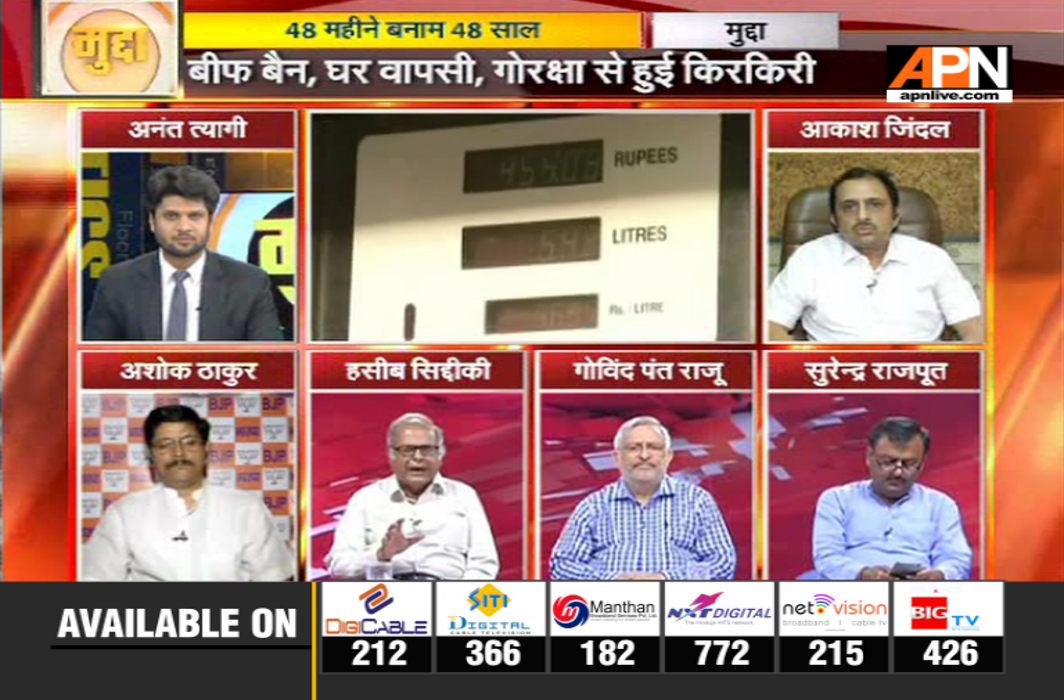 Panellists feel that with economy still lagging behind, people’s expectations have not been met

Anchorperson Anant Tyagi posed the first question of the show to Thakur, who said: “PM Modi has delivered all his promises. Congress had let down the youth, unemployment was on the rise. Now we are focusing on skill development and enterprise, and have been giving loan to the youth. In four years, 11 crore people have taken loan to start enterprise.”

Raju said: “BJP has tried to offer alternatives to the youth. The government has tried to get people thinking on enterprise, skill sets and so on. However, the unemployment problem is still rampant. Many promises delivered were so useless, such as people getting jobs in far-flung towns and villages, which eventually did not help.”

Rajput said: “Thakur has painted a rosy picture, as if all sections of the society are happy. The ground reality is far different. Look at Doklam, Kashmir, LoC, employment realities. the state of farmers, etc etc. In the last four years, corruption has gone up, petrol-diesel prices have gone up, excise money has been siphoned off. Modiji is good at sermonising only.”

Siddiqui said: “Prices are up, development has slowed down. Excise duty has gone up, but where are these funds used? We are still waiting for acche din.”

Jindal said: “I am neutral. I give the Modi government 60 marks out of 100. I had hoped Modi would come to the merit list of 90 percent, but this is not so. Diesel is vital for agriculture and industry growth. The Modi government has been unable to check diesel price rise.”

Thakur said: “The economy is in very good hands. Patience is needed to see the results.”

Rajput said: “Don’t play with the feelings of the people, expectations have been badly let down.”

Thakur said: “Bankruptcy and insolvency tribunal has been set up; black money has been curtailed through GST and demonetisation.”

Raju said: “Curtailing black money is a long, ongoing process. We can’t say there is no more black money.  The note ban has resulted in fewer gains than promised.”

Jindal said: “GST collection has improved, and that has indirectly helped in curtailing black money. Let’s not criticise only the Modi government. Black money hoarders are now scared. Modi’s USP is that he can take tough decisions, and he can implement these as well.”

Jindal said: “Real estate is down; spiralling diesel prices have affected construction. Modi’s promise of giving homes to all will be affected by the diesel price hike. This government needs to review this. Central excise and VAT must be reduced.”

Raju said:”Game changer programmes have not been as effective as they were supposed to be, and for that the blame is not on the PM alone. The scene in the villages continues to be bad. People should see development on the ground, in far-flung districts.”

Rajput said:”Financial mismanagement, bureaucratic and political mismanagement have cost the common man dearly. The question of a permanent seat in the UN Security Council, Doklam standoff, Kashmir issue… these continue to be the same. The BJP winning polls in some states is a completely different thing. Voting politics is a different ballgame and a lot of forces come into play for that. ”

Jindal said: ”With Modi’s frequent visits abroad, the perception of India is now far greatly improved. I give 6 out of 10 to the Modi government.”