Three killed in France’s Nice in a knife attack 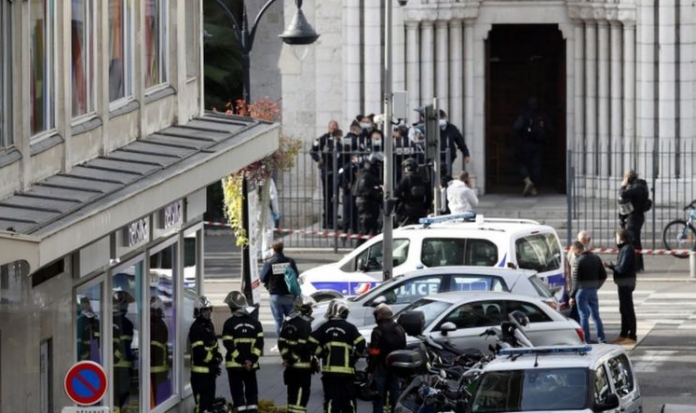 A knife-wielding assailant, said to be shouting Allahu Akbar, killed a woman and two others at a church in the French city of Nice on Thursday, reports said. The French anti-terrorist prosecutor’s department will be investigating the case.

Nice’s mayor Christian Estrosi called it a terrorist attack at the heart of the Notre Dame church. The attacker was detained minutes after the attack but even after being arrested he repeatedly kept shouting Allahu Akbar, he added.

Estrosi said one of the three people killed inside the church was believed to be the church warden, adding the woman had tried to escape and had fled into a bar opposite the church building. He added the knife attacker was shot by police while being detained and has been taken to hospital, alive.

Estrosi claimed France has suffered a lot and now it’s time for the country to exonerate itself from the peace treaties and laws to wipe out Islamist extremist groups’ from its territory.

Police armed with automatic weapons had cordoned the crime scene around the church , which is located on Nice’s main shopping thoroughfare. Ambulances and fire service vehicles were also at the scene.

French President Emmanuel Macron is yet to visit Nice. The French lawmakers in Paris observed a minute of silence in the National Assembly in solidarity with the victims.

Police confirmed that three people have died in the unfortunate event and many others have been injured.

Referring to the killing of a French teacher Samuel Paty in Conflans Sainte Honorine earlier this month, Estrosi said the victims have been killed in a horrible way and the method used during the killing matched the killing of Paty.  Samuel Paty was killed in a suburb of Paris for showing Charlie Hebdo’s cartoons of Prophet Mohammad to his students in a civics class. The attacker had said he wanted to punish Paty for his blasphemous act.

It is not clear if Thursday’s attack is connected to the attack on the French teacher.