Home Latest News Full normalisation of relations between Israel and the UAE. 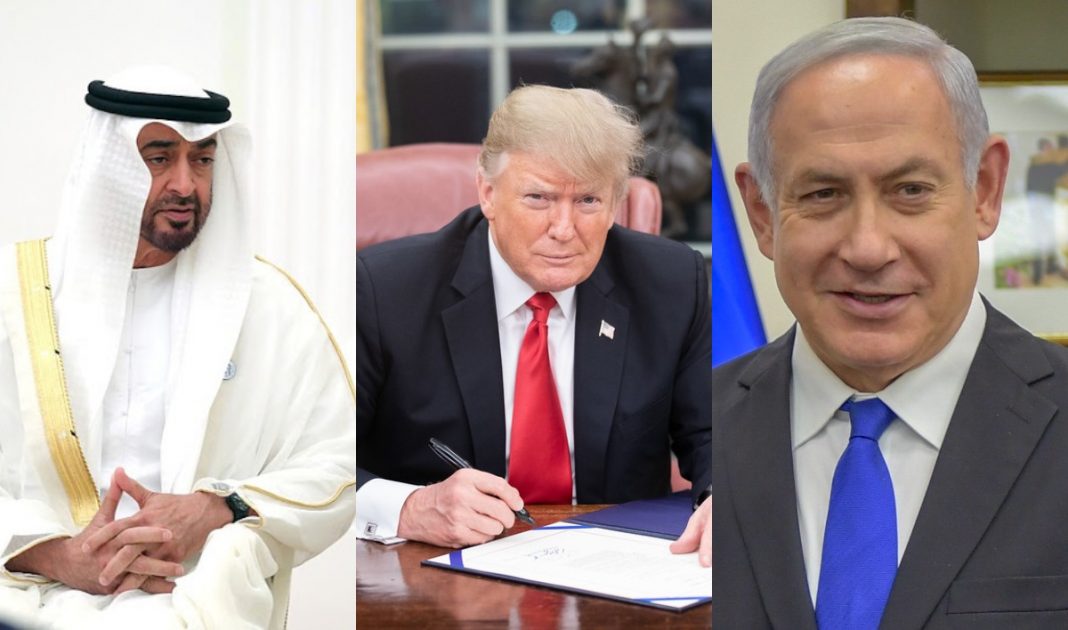 Under the accord, which US President Trump helped broker, Israel has agreed to suspend annexing areas of the occupied West Bank as it had been planning to do, White House officials said. It also firms up opposition to regional power Iran, which the UAE, Israel and the US view as the main threat in the region.

Israel had signed peace agreements with Egypt in 1979 and Jordan in 1994. But the UAE, along with most other Arab nations, did not recognise Israel and had no formal diplomatic or economic relations with it until now. The agreement was the product of lengthy discussions between Israel, the UAE and the US that accelerated recently, White House officials said.

A joint statement issued by the three nations said Trump, Israeli PM Benjamin Netanyahu and Abu Dhabi’s Crown Prince Sheikh Mohammed Bin Zayed had “agreed to the full normalisation of relations between Israel and the United Arab Emirates”. “This historic diplomatic breakthrough will advance peace in the Middle East region and is a testament to the bold diplomacy and vision of the three leaders and the courage of the United Arab Emirates and Israel to chart a new path that will unlock the great potential in the region,” the statement said.

US President Donald Trump said on Thursday that the UAE and Israel have agreed to establish full diplomatic ties as part of a deal to halt the annexation of occupied land sought by the Palestinians for their future state. The announcement makes the UAE the first Gulf Arab state to do so and only the third Arab nation to have active diplomatic ties to Israel.

In a separate statement, the crown prince stressed that the agreement would stop further Israeli annexation of Palestinian territories, which Israel has said had been awaiting a green light from Washington.

The agreement, to be known as the Abraham Accords, also gives Trump a foreign policy accomplishment as he seeks re-election on November 3.

“HUGE breakthrough today! Historic Peace Agreement between our two GREAT friends, Israel and the United Arab Emirates,” Trump wrote on Twitter. The UAE said it would remain a strong supporter of the Palestinian people and that the normalisation agreement maintained the viability of a two-state solution to the Israel-Palestinian conflict. Netanyahu said the agreement represented a “historic day” for his country.

But a senior Israeli official said applying Israeli sovereignty to areas of the West Bank — territory Palestinians seek for a state along with Gaza and East Jerusalem — was still on the agenda. The official said, “The Trump administration asked us to temporarily suspend the (sovereignty) announcement so that the historic peace agreement with the UAE can be implemented.”

Delegations from Israel and the UAE will meet in the coming weeks to sign agreements regarding investment, tourism, direct flights, security, telecommunications and other issues, the statement said. The two countries are expected soon to exchange ambassadors and embassies.