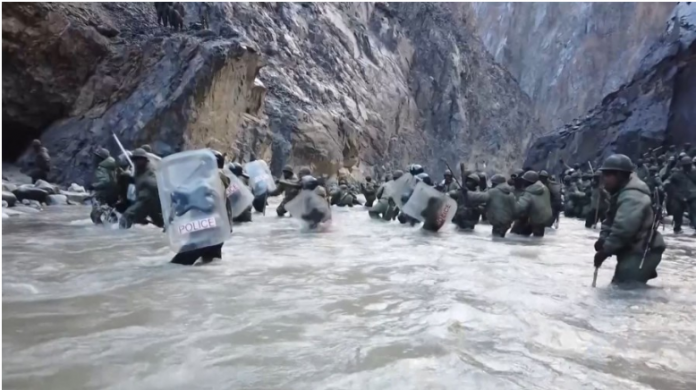 China has released a new footage of the clashes that took place between Indian and Chinese soldiers in the Galwan Valley in Ladakh in June last year.

To mark the armed forces’ founding day on August 1, China’s official English television channel, CGTN, has also uploaded a video on social media and its website.

The visuals surfaced hours after India and China issued a joint statement that they would continue Commander-level military talks to deescalate tensions in eastern Ladakh.

The clash took place in the Galwan Valley in eastern Ladakh, where the Indian Army and the PLA were locked in a standoff on June 15 last year, the worst since the 1962 war. However, India has officially announced that 20 Indian Army officials were killed in the clash while China has lost four soldiers. However, the number given by China has been rejected by the Indian media who had claimed China could have lost as many as 35 soldiers in the Galwan clash.

In the video, the PLA soldiers are seen pelting stones at Indian troops from an elevated position. Indian and Chinese soldiers can be seen pushing each other at the bank of the Galwan River. The clip also shows a few Chinese soldiers adrift in the shallow, fast-flowing river and soldiers of both sides amassed.

Following the 12th round of top-level military talks on Saturday, India and China have decided to disengage troops from Gogra Heights in eastern Ladakh, sources in the security establishment said. Both sides had held detailed deliberation last week, but are yet to arrive at a mutual consensus on Hot Springs – a friction point in eastern Ladakh. The nine-hour meeting took place at the Moldo border point on the Chinese side of the Line of Actual Control (LAC) in eastern Ladakh.

A joint statement released by the Army said the two sides had a candid and in-depth exchange of views relating to the disengagement and that the meeting further enhanced mutual understanding.

In other India News, Prime Minister Narendra Modi has asked his party colleagues to maintain restrain and protect the dignity of the House while slamming the Opposition for disrupting Parliament‘s monsoon session proceedings.