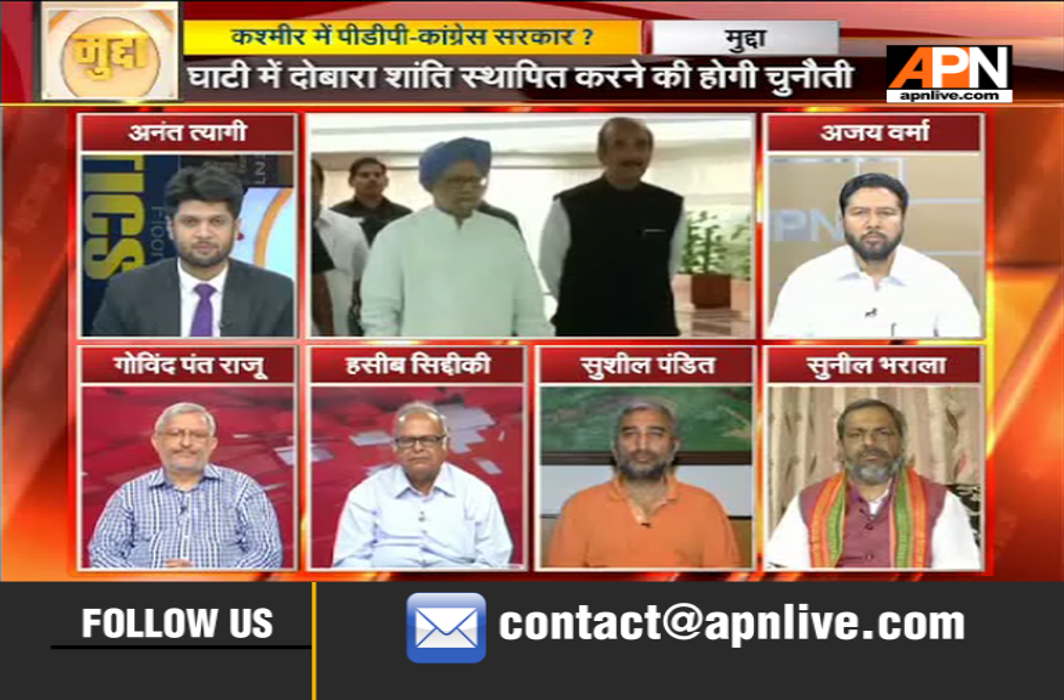 As conjectures abound that Congress and PDP may form government in J&K, panellists feel that the ground situation will not alter for the common man

As per sources in a section of the media, senior leaders of the Congress are in touch with the PDP, and the Congress is making efforts, not only to form an alliance with the PDP, but to get the help of small parties and independents, to form the government. APN’s popular debate Mudda discussed the issue. Anchorperson Anant Tyagi posed the questions to BJP’s Sunil Bharala, Congress’s Ajay Verma, noted journalist Haseeb Siddiqui, Kashmiri Pandit leader Sushil Pandit and APN consultant Govind Pant Raju.

Raju said: “If the Congress is ready, there should not be a problem in government formation, provided that the PDP too is ready. This way the Congress wlll get one more state. However, it remains to be seen how the BJP government at the Centre reacts to the development.”

Verma said: “We respond to a situation as per the requirement. Earlier, we were criticising the government whenever it was going wrong. Our focus is on 2019, Chhattisgarh, Madhya Pradesh, Rajasthan, price rise and so on. Saying that the Congress is trying to form a government in J-K is simply conjectures.”

Pandit said:”This is only a game to get power. Yesterday’s foes are trying desperate to get back power. Where is Kashmir in all this plan? It’s only politics.”

Bharala said: “We ended our pact on strategic issue with the PDP. I don’t see how things will change now, with the PDP again in power. People have huge expectations in the Valley, and they should be fulfilled.”

Siddiqui said: “Kashmir is divided into three parts—Hindu areas, Muslim areas and Ladakh. Atalji had won people’s hearts. Modi has not had such an impact in the Valley.”

Pant said: “It’s clearly a politics of self-interest. In this confusion, National Conference can become a strong party.”

Verma said: “We are still in the process of discussing matters. People are doing guesswork. Secondly, it all depends on what people want in the Valley; the situation should not get worse.”

Pandit said: “The Independents shall play a crucial role, if the alliance has to succeed. It’s not that a new government with the existing equations is not possible.”

Verma said: “The BJP will do all it takes to stall a new government. The BJP said that the Congress politics had failed the pundits in the Valley, but the people have seen the BJP now and will not spare the BJP any longer.”

Bharala said: “The decision for withdrawal of support to the Mehbooba government was because BJP did not want to disappoint people in the valley.”

Pandit said: “Congress, PDP or NC doesn’t offer any fresh alternative. There are no ideals here.”

Pandit said: “Earlier too, a scenario was proposed to keep the BJP out of power and form the government with the Congress and the PDP. But then the government was formed with the BJP. So it’s simply a game of profit, and no moral high ground can be taken by any party.”

Verma said: “No one can say what happens next in politics. Our aim is to improve the situation, not get into an ego battle. It is only on intentions that elections are won in any case.”

Bharala said: ”It doesn’t look like whatever combination forms the government with the PDP, the situation shall change for the common man.”