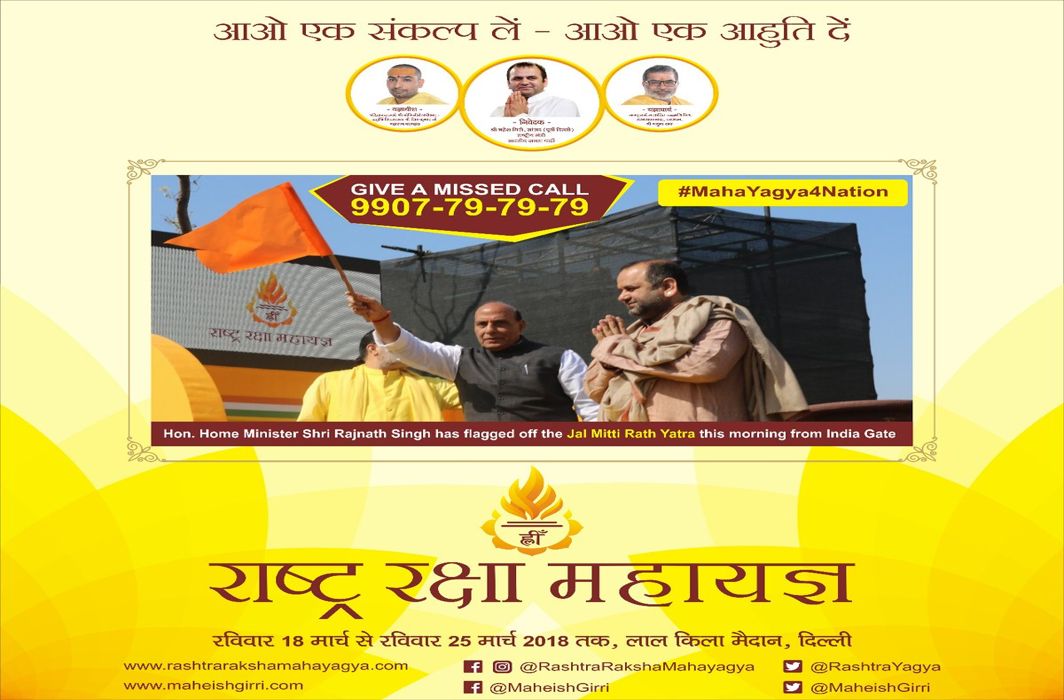 Don’t be shocked by the headline. Narendra Modi government has in full faith taken recourse to age-old, traditional Indian tactics to safeguard the nation: hold a grand yagya to propitiate the gods.

Ardently looking for ways to boost national security and protect the borders of the country, perhaps the ‘havan karenge, havan karenge’ song from the movie Bhag Milkha Bhag found resonance with its thought process and it found the solution in India’s glorious past and traditional culture that it keeps harping about – a grand yagya.

It is quite another thing that in those times, foreign invaders regularly came, made mincemeat of the defences and plundered the country. When Mahmud of Ghazni attacked, the defending state held yagya and prayed earnestly to Lord Shiva to destroy the enemy. There was little of fighting and more of a one-sided slaughter. The invaders looted and left, quite unmindful of the affront it was to the victims’ god.

But faith reigns supreme and such details do not come in the way of the believers. Nor do silly values and concepts enshrined in the Constitution – obviously borrowed from decadent western cultures – such as promoting scientific temper and forbidding the state from religious activity.

Emancipated from such bondages, and encouraged with proclamations from its lord and master that India is a Hindu Rashtra, the government is going full steam ahead with its plans to promote the national cause.

A week-long ‘Rashtra Raksha Mahayagya’ would be held at Red Fort in Delhi from March 18-25.

The government machinery has been pressed into service for a week-long ‘Rashtra Raksha Mahayagya’ to be held at Red Fort in Delhi from March 18-25. The main organiser of the event is BJP MP from East Delhi Maheish Girri – his name’s spelling, adjusted to astrological prescriptions, indicating his suitability for the event of national significance.

Girri, according to media reports, said soil and water from four sensitive border areas — Doklam, Wagah, Poonch and Siachen — as well as the “char dham” will be brought to Delhi by the Indo-Tibetan Border Police (ITBP) and party workers. The soil and water will be a part of 108 yagya kunds, being set up for the Rashtra Raksha Mahayagya.

Most senior BJP leaders and Union ministers will be present for the grand yagya. According to Girri, President Ram Nath Kovind, Prime Minister Modi, BJP President Amit Shah have confirmed their presence during the 7-day long event in Delhi.

The mahayagya will harp on the eight pledges to honour women, protect the Constitution, environment, public property, ensure cleanliness, exercise right to vote, rid the nation of corruption and eradicate casteism and communalism, which are important for nation-building. The yagna, will have 2,100 priests and 51,000 attendees praying to seek the blessings of Baglamukhi Devi for BJP’s re-election in the next Lok Sabha elections and other state polls, said media reports.

Girri said that the eight ‘Sankalpas’ will “not only ensure the security of the country’s borders, but also pave the path of prosperity”. Noted artistes will give cultural performances on each day of the event, the organisers said.

Several smaller events are being held in the run-up to the event. On Wednesday, Feb 14, Union Minister Rajnath Singh flagged off one such event, a “rath yatra”, from the India Gate lawns. Touted as an event aimed at “nation-building”, the yatra followed a similar event in Ayodhya on Tuesday, said media reports.

“Although soil and water from any border is sufficient, we wanted to get it from sensitive border areas. This is because the blood of our martyrs has been spilled there. Even today, our soldiers are guarding us from outside forces. The soil and water will be used in the mahayagya to bring peace to the souls of our martyrs, and to provide strength to our soldiers,” Girri said.

For Girri, the event at Red Fort — taking place after four months of preparation — will “witness the coming together of religious and nationalist awareness”. “Soil and water from char dham (four pilgrimage sites for Hindus) will bring in religious energy. National awakening will take place as soil and water from these four border areas, as well as ghee from each state, reaches Delhi. Through the yagya, not just forces outside the country but even those inside, which do not want the country’s progress, will be dispelled,” Girri said.

Lest this yagya, and the massive boost it would provide to India’s power, upsets the global balance of power and creates panic among neighbours and any adversaries, Rajnath Singh sought to dispel their fears and allay any suspicions about India’s designs. He said the intention was not to scare or instil fear in others, but to make India ‘vishwa guru’ – one who would teach and guide the world and emancipate it from the darkness of ignorance.

With such an enlightened and strong India, knowledge and peace would flourish everywhere under its leadership.