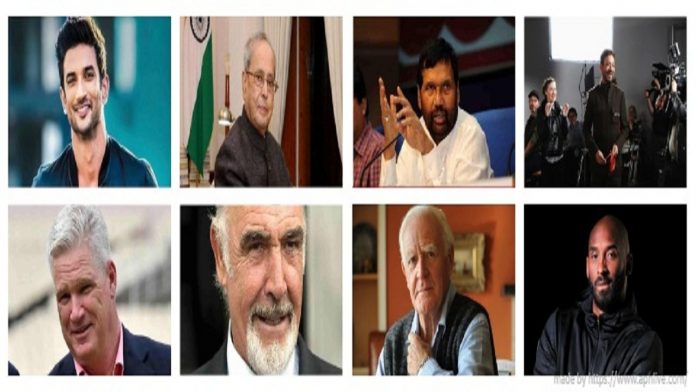 2020 has been seen the demise of many a popular personality. From the 90-year-old Sean Connery to the 60-year-old Diego Maradona to many more much younger. Apart from coronavirus pandemic, we lost many celebrities who contributed a lot to the world.

Here we present a list of noted celebrities whom we’ve lost in 2020.

The mysterious death of the rising Bollywood star Sushant Singh Rajput became the most popular topics for debate in 2020. He was found dead hanging from the ceiling fan at his home in Bandra, Mumbai on June 14, 2020. His mysterious death went from a tragedy to sensational controversy, and then became the matter of a Supreme Court and CBI investigation.

Veteran actor Rishi Kapoor’s two-year-long battle from cancer ended with his passing. The untimely death left Bollywood fans across the country and the world in sorrow.

The demise of the famous Bollywood choreographer Saroj Khan in the pandemic period has been a very shocking moment for the film industry. The three-time national award winner choreographed more than 2,000 songs, including many top Bollywood hits, and memorable songs in Hindi cinema.

The emotional tweets of some of their aficionados are testimony to the sad moment of their passing.

India’s most recognisable face in the West, and a reckoned name in acting, Irrfan Khan passed away fighting a colon infection on April 29, 2020. A man of lucid expression and few words and a strong soul, Irrfan fought many battles and emerged an iconic personality. The death of this rare talent and a brilliant actor left a void in Indian cinema.

One of the greatest survivors in Indian politics, President of the Lok Janshakti Party, and the Union minister for consumer affairs, food and public distribution, Ram Vilas Paswan died at the age of 74 after heart surgery. He was a prominent face of Dalit politics in the Centre and a socialist icon.

Jaswant Singh passed away due to cardiac arrest on September 27, 2020. He was a former union minister and a close aide of former prime minister Atal Bihari Vajpayee. He was from Rajasthan and had served as India’s foreign minister, defence minister and finance minister.

Former President and Congress leader Pranab Mukharjee passed away after undergoing treatment for around three weeks. He had to get admitted after testing positive for Covid-19, and he had to undergo surgery after the detection of a brain clot.

Rahat Indori, the darling of shayri, died due to coronavirus. Indori earned worldwide name, and recognition with his couplets, and after his demise, he left a huge collection of writing as his inheritance.

Top strategist and senior Congress leader Ahmed Patel was one of the many victims of Covid-19 complications. The sudden demise of this veteran leader was a big loss to the Congress and India’s politics.

Congress stalwart and former chief minister of undivided Madhya Pradesh, Motilal Vora passed away on December 21, 2021, just after celebrating his 93rd birthday.  He held the post of All India Congress Committee treasurer for nearly two decades, and selected as the general secretary in charge in 2018.

NBA superstar and the producer of Oscar-winning short film Dear Basketball Kobe Bryant passed away on January 26 in a helicopter crash with eight other people.

A soccer genius, and former Argentine professional footballer, Diego Maradona left the world on November 25, 2020, putting his fans in a deep shock. He led Argentina to win the 1986 World Cup and became a global icon. Beyond the game, he was a larger-than-life persona. Smoking cigars with Fidel, hanging out with Chavez and the like, Diego went suddenly after brain surgery.

The star of the blockbuster superhero Marvel film Black Panther, Chadwick Boseman died after having a four-year battle with colon cancer.

A well-known name in international cricket history, Dean Jones left the world at the age of 59. Former test and one-day batsman died at a hotel in India after suffering a cardiac arrest. The global cricket community affectionately call him Deano.

Bond, James Bond. The most popular character he played became the image trap which stayed with Sean Connery as long as he lived and in his death. The man with the baritone that could leave aflutter a thousand hearts with the first word died on October 31, 2020, at the age of 90. In his seven decades as an actor, the once-bodybuilder defined aura and style. He won an Oscar in 1988 for his role in The Untouchables, and remains in popular cinema as the more refined Henry Jones Sr from Indiana Jones and the Last Crusade.

Smiley and Laemas’s creator. A spook who wrote elegant prose of the Circus, the Cold War and Checkpoint Charlie. David Cornwell aka Le Carré left the world at the age of 89. The characters of Le Carré were ordinary men who ran the world, unlike the very macho, licensed to kill corner that popular fiction painted spies into.

In a world where politics has unmasked itself into a majoritarian drug, a man who stayed mute through his dance performances bid bye with cancer taking him into its stronger embrace. A pioneer of modern dance in a land of jhumka and thumkas of the popular silver screen, Astad Deboo and his passion left behind memories of performances and his well-wishers and admirers.

The voice of several south Indian superstars and the man who gave voice to Salman Khan’s character in his debut Maine Pyar Kiya, S.P. Balasubrahmanyam was the colossus in Tamil Nadu, Andhra Pradesh (and Telangana) and Karnataka, who was as humble to his visitors as to his craft. Balu saar died on September 25, 2020, after his long fight with severe health issues due to the coronavirus infection.

India’s first Oscar winner and celebrated costume designer Bhanu Athaiya died at the age of 91. She got the look for Attenborough’s Gandhi spot-on, making the film itself a tour de force. Though often recalled as the first Oscar winner from India, Athaiya designed costumes for over 100 Indian films.

In his second innings, Chetan Chauhan served as a cabinet minister in Uttar Pradesh. The former India opener had a cricketing career of 12 years, playing 40 Tests, 7 ODIs and was awarded the Arjuna honour.