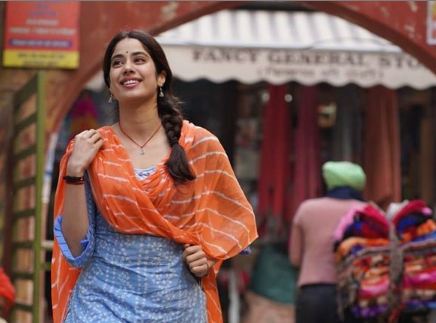 Actor Janhvi Kapoor will feature in Good Luck Jerry, a film backed by Anand L Rai’s production house.The actor has shared a first-look image from her upcoming film which began filming in Punjab on Monday.

In the photo, Janhvi appeared to be a happy go lucky character. Wearing a salwar Kameez with her hair styled in braids, the image showed her walk along a narrow lane, with a smile on her face. From the first look it seems, Janhvi plays the role of a small town girl in the film. She captioned the photo with the film’s name as a hashtag and a smiley. With this film, the actor for the first time will be collaborating with filmmaker Aanand L Rai.

Aanand, whose Colour Yellow Productions has backed the movie, welcomed the 23-year-old actress onboard on his Twitter feed. He wrote, Colour Yellow welcomes 2021 with #GoodLuckJerry starring #JanhviKapoor, marking the first day of the shooting of the film.

Written by Pankaj Matta, and directed by Siddharth Sengupta, the film also stars Deepak Dobriyal, Neeraj Sood , Meeta Vashishth and Sushant Singh.The first schedule of the film is expected to continue till March, according to news agency PTI.

For the unversed, director Siddharth Sengupta has previously helmed television shows such as Balika Vadhu and web series Apharan for ALT Balaji.

Meanwhile, Janhvi was last seen in Gunjan Saxena: The Kargil Girl released on Netflix last year. The film  was critically applauded for her performance. Her upcoming list of films include Karan Johar’s Dostana 2 in which she co-stars with Kartik Aryan, and also Roohi Afzana, co-starring Rajkummar Rao.

Aanand L Rai, who is known for directing movies such as Raanjhana and the Tanu Weds Manu series, recently wrapped the Delhi schedule of his film, Atrangi Re, starring Akshay Kumar, Dhanush and Sara Ali Khan.