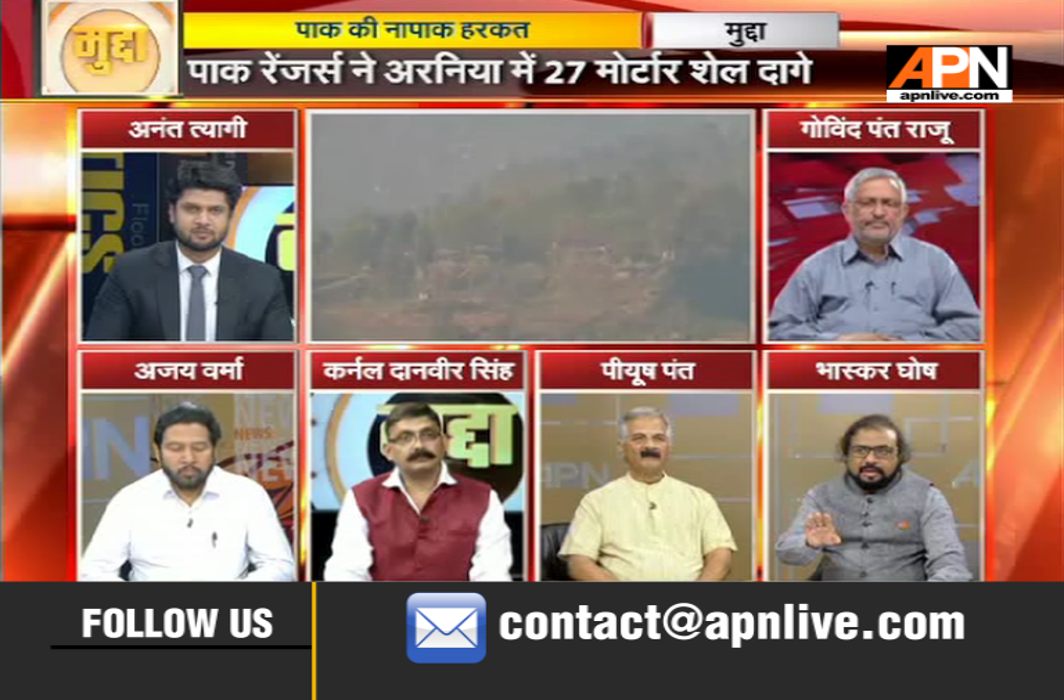 Panellists feel that with Pak repeatedly violating ceasefire, it is now a full-fledged violation of the LoC

Anchorperson Anant posed the first question to Col Danvir Singh, who said the ceasefire violation is not fair. “Our army can’t be emotional, and has to give a fitting response.”

Pant said “India has always wanted peace, so ceasefire is welcome, but violations of ceasefire persist and that is the problem.”

Raju said: “Pakistan has violated the ceasefire pact at least 700 times in the last one year. Pakistan is bent on creating tension around LoC, and BSF has given a fitting response.”

Ghose said: “A soft approach could be adopted due to Ramzan, but unfortunately Pak violated the ceasefire.”

Verma said: “There are some typical areas where attack is certain, but no blueprint is ready from the government’s side. Government should be pro-active instead of indulging in back-slapping. Pak attitude is not going to get better.”

When Ghose said that “infiltration graph is on the downward slide”, Raju said: ”Ceasefire violations and terrorism graph is on the rise, and government policies need to be re-examined.”

Col Singh said: “LoC faces ceasefire violation and infiltration. Ceasefire violation is always given a fitting reply by the army. In modern time, infiltration is rare. At the grassroots level, why is terrorism not contained? Government policies should be geared towards the youth so that they can devote themselves to more usefully productive work. He said Kashmir does not have a development issue as much as of radicalization. It is this radicalisation that the successive governments have not been able to contain.”

Pant said: “Where are the government policies to contain radicalisation?”

Ghose said: “Politico-social measures alone cannot help. We need to get to the root cause. Recruitment of terrorists needs to be addressed. Kashmir is not a backward state.”

Col Singh;”Infiltration is not easy, as the Indian army has taken all the steps to make it difficult.”

Verma said:”Crores are spent at top-level dialogues, the so-called 56 inch chest is now reduced to a small 6-inch, due to all-round failures. The PM is now in poll mood, and will release videos etc that actually mean nothing on the ground.”

Raju said: “If Pak initiates sudden attack, local people find it difficult to get security, though bunkers are being made.”

Col Singh said:”the army is doing its best to nip problems in the bud. After stabilising the ground, politicians need to start their narrative. The Valley’s biggest failure is that of politicians, not of the defence.”

Pant said: “The government has no strong will. It is in Pak interests to keep Kashmir issue alive. Dialogue can be a way out, Social and economic factors need to be seriously looked into so that the youth do not go astray.”