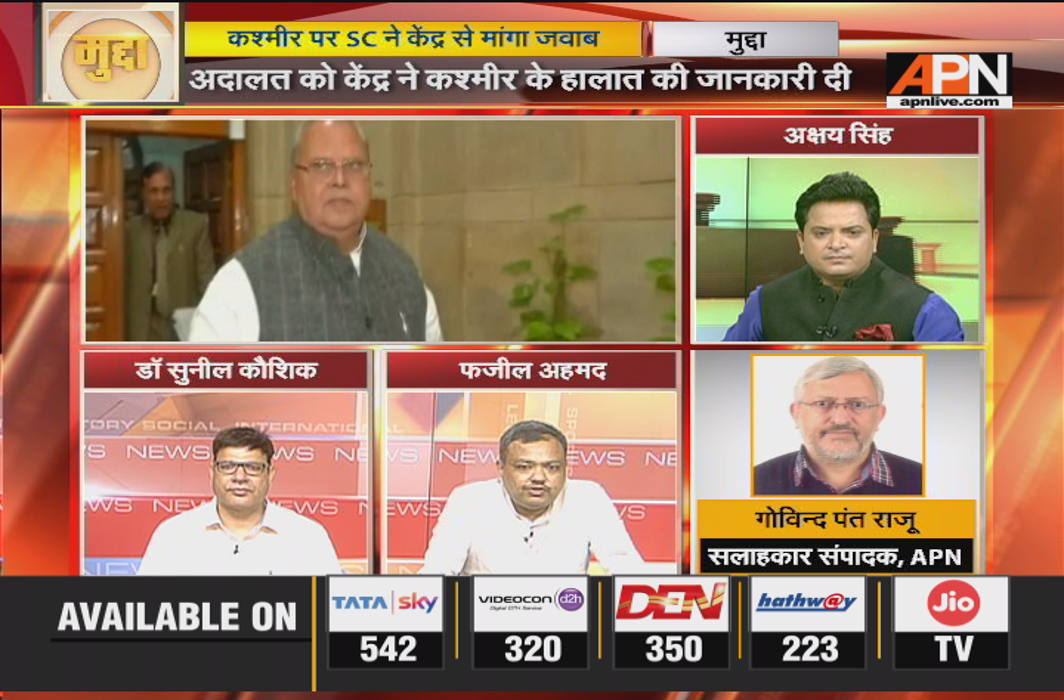 Kaushik said: “It will take time for normalcy. Ghulam Nabi Azad has been allowed to visit with certain conditions. Now there has been enough of politics and the government should focus on development in the Valley.”

Akshay and Ahmed argued over stone pelting and comparisons with others sates like Nagaland.

Raju said: “Kashmir newspapers and TV channels have started working. The situation is limping back to normalcy. No point comparing with others states like Nagaland.”

Prof Bhim Singh said: “Kashmir people were neither Pakistanis nor communal. This is only political propaganda, power struggle. It is sad that Farooq Abdullah and senior leaders have been constrained in the Valley. This is no civilised way.”

Jha said: “PM Modi has freed the country of an archaic clause. PoK is also India’s part, and now this will also be tackled.”

Kaushik said: “In the last 45 days, there has been no violent incident in the Valley; this itself is no small achievement. The Supreme Court gave a verdict, but normalcy in the Valley won’t return in an instant.”

Ahmed: “Good there has been no violence, but help should reach those in need of medical aid, those who are caught in distressing situations, in need of employment, and so on.”

Jha said: “People have faith in the government. People like Fazil Ahmed are not thinking of the country, they are only talking in a partisan and divisive manner.”

Ahmed said: “I felt bad when Nagaland hoisted a different flag on Aug 14. What was this government doing then? Never in the past has any attempt being made to relocate Kashmir Pandits back to their homes.”

Raju said: “About Nagaland I would like to say that it has been stated in various fora that the issue is very different from that in the Valley.”

Ahmed said: “See, people in the Valley have gone to places far away from their home. My point is why the government could not take steps that people did not have to move away from Valley for basic things, in the first place?”