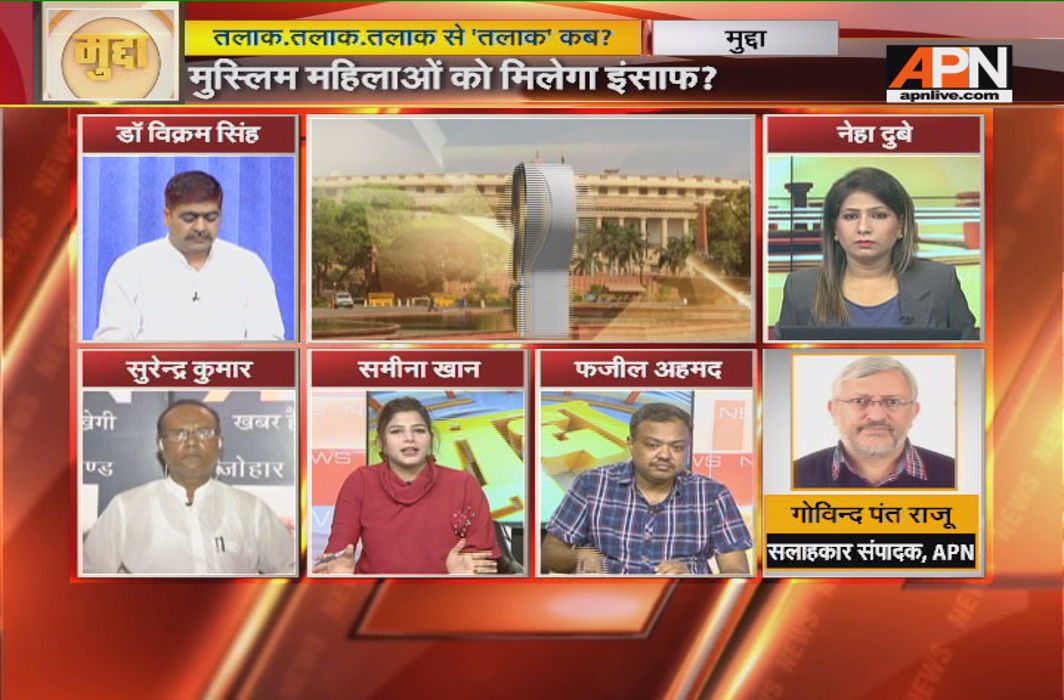 Rajya Sabha has taken up the Muslim Women (Protection of Rights on Marriage) Bill, 2019, for consideration. The bill seeks to declare the practice of Triple Talaq as void and illegal and a cognizable offence. It provides allowance to women victims and their dependent children. The government is banking on floor management in the Rajya Sabha to clear this Bill. APN’s popular debate Mudda discussed the issue. Anchorperson Neha Dubey posed the questions to panelists including the BJP’s Dr Vikram Singh, RJD’s Surendra Kumar, political affairs expert Fazil Ahmed, social affairs expert Sameena Khan and APN consultant Govind Pant Raju.

Singh said: “This is like a test of fire. If a section of the members feel that whatever good is being done has to be opposed, there are bound to be problems. This is a matter of giving dignity to Muslim women. It is within the constitutional limits, but members get political over even such muddas. You can see their true colours.”

Raju said: “This is definitely a challenging issue for the government JDU has been very clear on this subject. If another six members oppose, it will get tough to pass the bill. Some political factions have been vehemently against the bill, some other parties are neither for or against the bill, and they shall prove crucial for the government. Supreme Court has given directions to the government and that is why the government has moved the Bill. Congress leaders claims that they had welcomed the SC move, but now they are opposing. JDU too is saying that the Muslim population should have been consulted on this Bill. Parties are opposing the Bill due to various reasons. Parties are looking at their vote banks. Government is looking at the SC directions. “

Kumar said: “To create a communal atmosphere, BJP is trying all kinds of tactics. The aim of the government is to create fear among minor communities. This kind of meddling in minority rights is not acceptable. All opposing factions, Maulvis, and senior Muslim leaders should be consulted before going ahead with this kind of devisive bill.”

Ahmed said: “None of these leaders are actually bothered about the Muslim lot, whether the RJD, or the Congress. If they were really pro-Muslim, the situation would not have come to this. The Holy Book is against Triple Talaq. This has become an issue to grab media attention. This is an amended Bill, community leaders should have been consulted.”

Singh said: “Is this an issue to be thrashed out at the community level or by parliament?”

Khan said: “This Bill is not very clear on many issues. The government should make all points clear, like if the husband goes to jail, who will look at the financial allowance?, and so on. If these issues are cleared, then it’s a good move.”

Singh said: “We are trying to empower women, but the opposing parties are trying to give a communal colour to the move. After talaq, court decides on alimony.”

Ahmed said:”Those who have higher income have to pay more alimony. If you see the records there have been only around 300 or so triple talaq issues.”

Khan said: “Government does not look at the financials, and is bent on sending errant husbands to jail, under the revised Bill. Triple Talaq is made out to be a criminal act, this is too harsh a verdict and impacts women in the long run.”

Ahmed said: “If a husband indulges in domestic violence, like forcing a woman out of home after saying Triple Talaq, then it’s a criminal case.”

Raju said: “Let me add, that there are certainly more than 300 cases concerning Triple Talaq. This talk of husband going to jail, please see that women complain that after Triple Talaq, women are denied maintenance. ”

Ahmed said: “BJP leaders feel that they are not answerable. If police had intervened on all matters concerning women in Triple Talaq cases, then the cases would have been settled at the thana level only.”

Khan said:”I want the government to consider what it can do for Hindu women too, instead of focussing on Muslim women alone. Women issues should be treated in the general sense, irrespective of which community they belong to.”