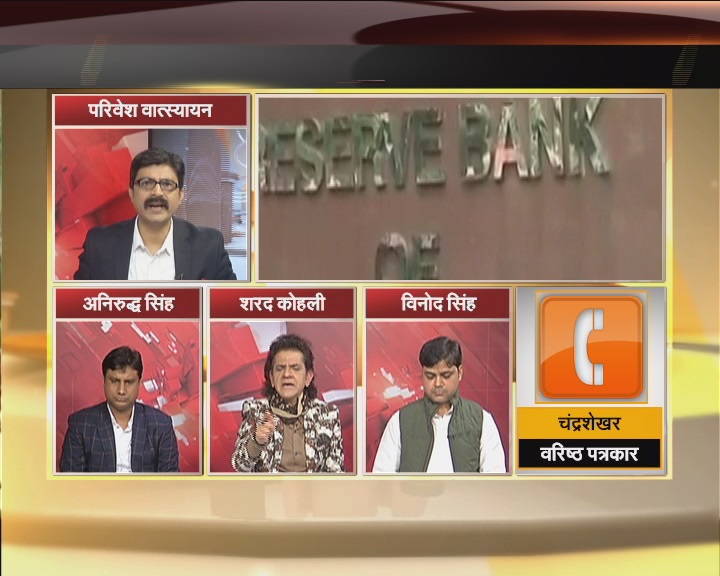 Panelists observe that the debate should move to economy now

An overwhelming amount of data have pointed to the weakening economic situation. Prices of essential commodities, especially vegetables have gone up and fuel prices are likely to shoot up. APN’s popular debate Mudda discussed the developments. Anchorperson Parivesh Vatsayan posed the questions to panellists, including the BJP’s Aniruddh Singh, Congress’s Vinod Singh, economist Sharad Kohli, and noted scribe Chandrashekhar.

Kohli said: “There are no jobs, business is not doing well, it’s like rubbing salt on the wounds, netas are busty with CAA and NPR politics. What we are getting to see now is stagflation. Economic growth is badly affected. Dal and vegetable prices have gone up by 60 percent. Some of this could be a seasonal hike, but look at onion price rise. This happens every year. Why was the government not prepared to deal with this? Hoarder problem is also there. Both the farmer and the consumer are suffering. Business is suffering. RBI has to reduce the repo rate now. This is like facing the well on one side and the ditch on the other.”

Aniruddh Singh said: “The retail inflation is seasonal. Overall inflation is a global scenario. I would like to point out that start-ups are flourishing. Maharashtra and Madhya Pradesh, the onion producing states, should have done better in dealing with its price rise.”

Vinod Singh said: “BJP people only know how to slap their own backs, they do not have solutions for any problems.”

Chandrashekhar said: “The figures are there before all. Onion and potato prices are up. Dr Manmohan Singh was an economist but would take advice from an advisory council. This government has no such expert panel. The Council is a free-minded body of independent people, such a panel is needed. These people are taking advise from personal friends, it seems.”

Aniruddh Singh said: “All governments have councils. You can place an RTI for this.”

Kohli said: “I would like to add that an advisory council is there, but I don’t know how far its advice is taken. CAA has hijacked the debate. Opposition should focus on economic issues and not CAA etc. There should be constructive debate in the country now.”

Vinod Singh said: “I haven’t raised CAA issue on this forum. The common man is suffering. What is this government doing? Handed over the moolah to friends?”

Kohli said: “Pressure should be put on the government to deal with the rising prices.”

Chandrashekhar Singh said: “The government should show the way. The BJP representative is saying opposition should be showing the way, isn’t that the job of the government?”

Aniruddh Singh said: “The point is that the opposition has no mudda, and they are talking Pak language.”

Vinod Singh: “The Congress is in opposition. The BJP had promised golden days, now where are those golden days?”

This led to a slanging match started between Vinod Singh and Aniruddh Singh.

Kohli said: “See, crude oil price rise is not under the control of the government. But what the government can do is to find out the reason why vegetable prices have shot up. Check the hoarders. Why is no action being taken against the hoarders?”

Aniruddh Singh: “All works are done in a parallel way. Randeep Surjewala has tweeted on Pulwama, how can we keep shut on that? What did Congress do in 70 years?”

Kohli said: “This is a serious matter, of the common man’s pocket. On February 1, budget will be presented. There are three pillars of the economy: consumption; government expenditure; third is, the new industries. I would like to add a fourth, which is exports. All these engines of growth have to start off with speed. Rural consumption needs to go up urgently.”

Chandrashekhar said: “In December, there has been no hike in fuel prices, the largest hike has been that of the prices of vegetables. Government has to launch this fight against inflation. If RBI increases interest rate, it will lead to a complex situation. On the supply side, the government has to take the right steps, import food grains to deal with the shortage. In manufacturing, there has been the least growth, only 2 percent, what happened to Make In India ?”

Aniruddh Singh said: “See if one sector is impacted, there might be a boom in another. Some sectors are affected by the seasonal weather.”

Karnataka Chief Minister BS Yediyurappa on Saturday held an emergency meeting at his residence to assess the covid-19 situation in the country. This comes a day after when the state recorded 14,738, out of these 10,497 were reported in Bengaluru on April 15.
Read more
Load more