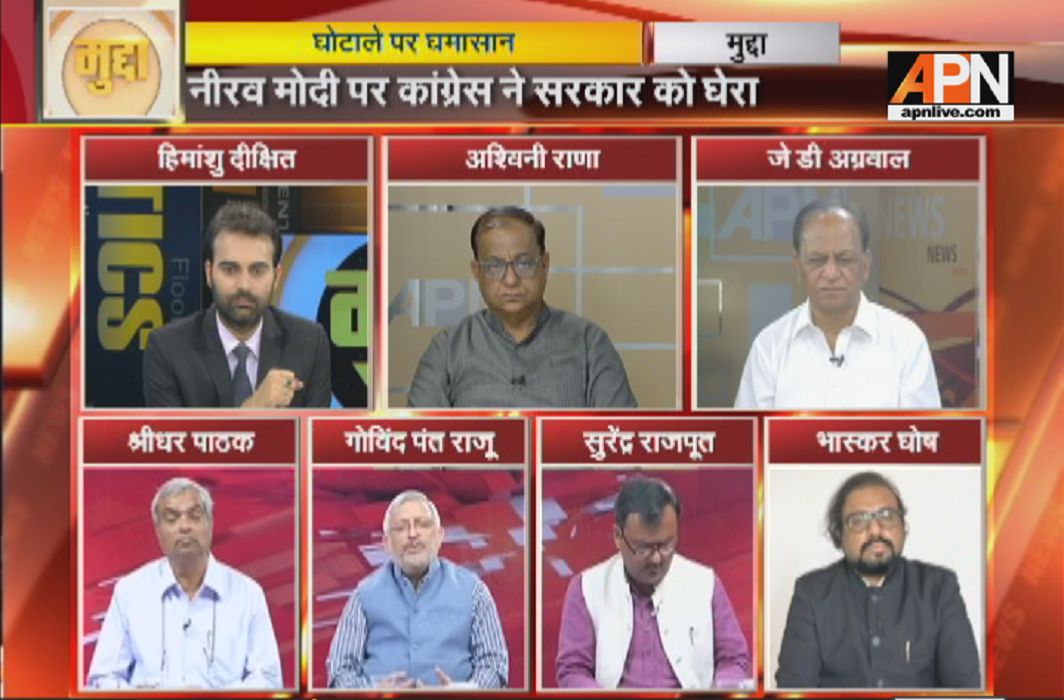 Mudda panellists feel that while the systems are in place, the corrupt know how to breach them; also loan defaulters must be brought to book, dues realised

With fracas reigning in parliament for the last two days, it is difficult to believe that elected representatives are looking for real and meaningful solutions to the current economic mess. Will the Fugitive Economic Offenders Bill change anything? Under whose regime frauds were bigger, the BJP or the Congress? The BJP leaders try to say that the scams took birth when the Congress was in power.

Rajput said the BJP only makes allegations. “Agencies are investigating the scams, whether they started before the BJP government or now,” he said.

Bose said this is like the pot calling the kettle black. “The country is suffering due to NPAs that took birth before 2014. We have only now been able to get some knowledge regarding the different scams, like the Nirav Modi scam. The proposed new bill will help to prevent such scams from happening in the future. “

Rajput then asked how come Nirav Modi was allowed to escape the country.

Aggarwal said in 1998 banks brought out a defaulters’ list, but no follow-up work was done and it was simply told that the list is confidential. “Now due to the NPAs, nearly Rs 56 lakh crore are in bad loans. Officers have been found corrupt, so obviously the common man has to bear the brunt.”

Rana said that the Fugitive Economic Offenders Bill will make a difference. “I can’t understand the ruckus in parliament over the bill. There’s a big question mark over those who oppose the bill.”

Pathak said if people only want to create a scam, nothing can stop them, there will always be loopholes.

Raju said that regarding the NPAs, the government has done little; it rather gave a bailout package to the banks. “Recent scams that have been discovered have been on a large scale. In 1998, when the bank defaulters’ list came out, bank employee associations had raised slogans against the offenders, but still the NPAs are on the rise. So the government needs to do a lot more. Even the proposed bill is far less than what is actually required.”

Rajput pointed out that TDP MPs, not the Congress, have been protesting in parliament. “If Chidambaram is at fault, the courts are there to see that he does not escape. The Congress has no problem with an FIR against the culprits. These are technical issues and we can’t be judgmental. If Ravi Shanker Prasad has sufficient knowledge regarding Chidambaram’s bungling, he should tell the courts, not the media. The Congress wants Nirav Modi to be brought back into the country.”

Aggarwal said these issues concern the common man. Regulatory authorities are there, so how come such scams have been thriving? “Systems are in place, but they have been broken by corrupt officials. In a democracy, the law takes its own course, albeit after a long time,” he said.

Raju said the economic system is in doldrums, people are fearful of banks, and so MPs should leave personal allegations aside and thrash out a fool-proof formula to finish corruption.

Rana said people’s faith in banks has been dealt a severe blow.

Bose said post 2014, banking regulations have been changed; there is an anti-chit fund law, bank fraud laws, and so on. There is a new bill proposal that will prevent the likes of Nirav Modi and Vijay Mallya from fleeing the country in the future.

Rajput wanted to know how come for everything the Congress is blamed, whether the issue is about what was happening before 2014, or after that time, whether it is in power or otherwise.