From offer namaz everywhere precursor to Babri verdict, Muslims in Gurugram left with nowhere for prayers

November 5 Govardhan Pooja event saw the attendance of several right-wing leaders and Hindu priests, including Kapil Mishra, who apart from being a BJP leader, is accused of instigating violence in Northeast Delhi in February 2020 that claimed 53 lives and most of whom were Muslim. 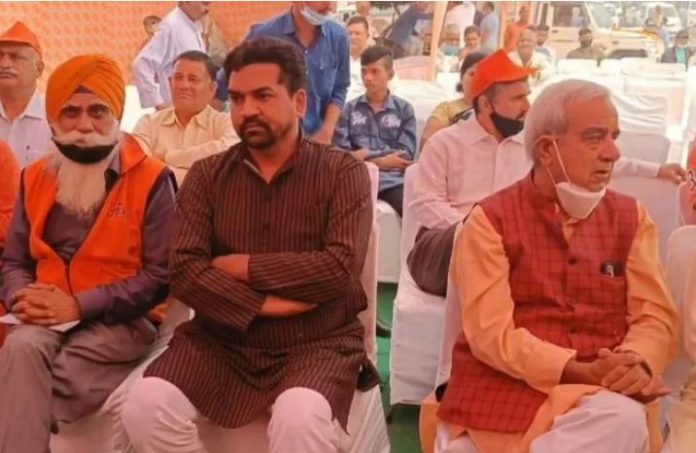 This Friday there was no place for Muslims to perform namaz in Gurugram because Hindu groups had erected large tents to perform Govardhan Puja on the same ground in the city’s Sector 12A where Muslims used to offer Jumma prayers. They had been barred recently by resident groups and Hindu outfits from doing the same last Friday as well.

The event on November 5 saw the attendance of several right-wing leaders and Hindu priests, including Kapil Mishra, who apart from being a BJP leader, is accused of instigating violence in Northeast Delhi in February 2020 that claimed 53 lives and most of whom were Muslim.

In Gurugram, Muslims have been at the receiving end of the Friday police who had forced them to stop offering Friday namaz on vacant plots in parts of the self-declared Millennium City of Haryana.

With Covid-19 infections surging in the last year and half, the Friday congregation in Sector 12-A had resumed recently. But protesters mainly from right-wing groups ensured they didn’t get that space either.

With the Gurugram administration already closing most mosques in the region, open space was the only option for Muslims to pray.

Even the Sanyukt Hindu Sangharsh Samiti had issued an ultimatum to the authorities, saying they would stop Muslim prayers themselves if the Gurugram administration fails to do so. Channelling Bal Thackeray’s often jeering call about Muslims holding up traffic by offering namaz, these citizen groups had let their majoritarian cats out of the bag.

The Gurugram Police deployed heavy security in Sector 12A and detained around 30 protesters shouting slogans against the prayers and holding up placards that read Gurugram administration, wake up!

Talking about the issue earlier, Haryana Chief Minister Manohar Lal Khattar had taken a position suggesting namaz as an essential practice should always be performed inside a designated space, built essentially for this purpose. This is when mosques are shut.

Khattar’s statement goes against the Supreme Court verdict in the Ismail Faruqui case (also known as the Ayodhya case of 1994) which exemplifies the mosque-namaz dichotomy.  A five-judge bench had decided namaz could be offered anywhere and that a mosque was not necessary for this. It was also claimed that namaz at public spaces was a pretext to grab public land. If public spaces are used for religious purposes and the practice invites objections from the public due to the inconvenience suffered by it, Muslims needed government permission to offer namaz and other congregations.

When the Allahabad High Court partitioned the Babri Masjid land equally among the Sunni Waqf Board, the Nirmohi Akhara and Ram Lalla in the Babri Masjid title suit case, the court was told that the birthplace of Lord Ram cannot be shifted to another site, while a mosque with no particular religious significance to Muslims can be shifted anywhere and will not affect their right to practice religion by offering namaz in other mosques.

Justifying the acquisition of the 2.77-acre land in Ayodhya, the Supreme Court made a distinction between the practice (namaz) and the place (mosque) building on the fact that the Quran does not command Muslims to offer namaz only inside a mosque. For this reason, performing namaz (individually as well as collectively) in the open is religiously valid, and legally justifiable.

With the namaz-can-be-offered-anywhere line, the Babri Masjid as a mosque became irrelevant with its religious significance eroded.

While the kanwar yatra has been called off due to Covid-19, in pre-pandemic times the kanwariyas marched across North India (in fact, the state, Residents Welfare Associations and businesses combine to make arrangements for their refreshment, stay and passage). This is when public roads are barricaded for several days and when public footpaths and roads are taken over by the floats of the devout.

The current smog over Delhi is also the end result of the people of the city and its surroundings burning crackers to observe the festive occasion. So Hindu celebrations too end up taking up public space and also pollute their own lungs apart from those of other citizens.

Indian Islam and its representation is characterised by 2 key elements — a mosque with a minaret and a congregation offering namaz. One cannot think of Islam/Muslims without these two.

No wonder on Eid-ul-Fitr, the picture that is carried the world over is of the prayers at the Jama Masjid in Shahjahanabad. Or that of the choc-a-bloc shops around Hyderabad’s Charminar! One cannot think of Islam/Muslims, without these two.

A good book is fuel for your brain, and these authors have proved to us that they drive some mind-blowing brain fuel. Our lovely list also includes an author who wrote “Knots” a beautiful bestseller. Want to know more about them? Read ahead.
Read more
Blogs

To the handsome hunks and smart gentlemen, if getting that perfect look for an evening or a comfortable and refreshing dinner is your goal, we have got you covered. To make your tuxedo or your sherwani outfit a perfect “eye-catching” affair, a wrist watch for men can be your perfect mate.
Read more