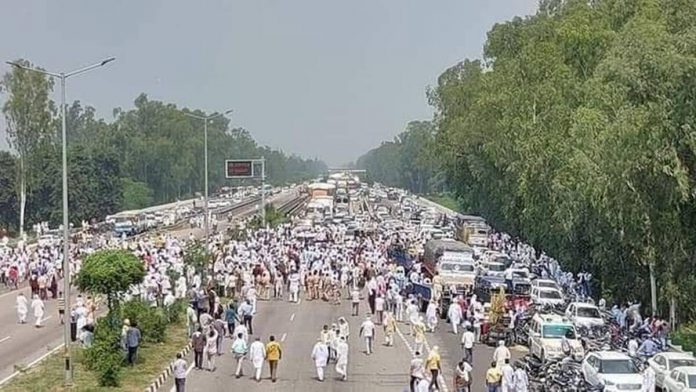 Haryana Police on Friday charged Bharatiya Kisan Union (BKU) chief Gurnam Singh Charuni and 300 others for damaging public property and violating prohibitory orders, a day after thousands of farmers blocked the Delhi-Chandigarh highway and clashed with police during their protest at Pipli in Kurukshetra. The farmers were protesting against the three “anti-farmer” ordinances passed by the Central government.

On Thursday, a protest had been planned at the Pipli Mandi and the district administration had erected barricades to prevent the congregation. Angry farmers then proceeded to block the National Highway connecting Delhi and Chandigarh. Some farmers from Shahbad area tried to force their way to the protest site on tractor, leading to a lathicharge after farmers attempted to run over police personnel manning the barricades.

Charuni said the Haryana government wanted to prevent the farmers’ gathering citing social distancing norms in force following the Covid-19 outbreak. He said it was just a ruse to suppress the agitation of the farmers and vowed to continue the fight against the anti-farmer decision.

The Union Cabinet had passed three agriculture ordinances in June: the Farmers’ Produce Trade and Commerce (Promotion and Facilitation) Ordinance, the Farmers (Empowerment and Protection) Agreement on Price Assurance and Farm Services Ordinance, and an amendment in the Essential Commodities Act, 1955. While the government says the ordinances are to create a farmer-friendly environment enabling them to sell and purchase agricultural produce, the farmers are upset that under the cover of reforms, the government was planning to discontinue the mandi and the minimum support price regime in force all this while.

At the protest, farmers demanded the government introduce a new law to ensure MSP. Thursday also saw VIP movement on the highway when the Rafale jets were inducted at the Ambala air base by Defence Minister Rajnath Singh in the presence of the French defence minister.

Read Also: NEET leads to another girl’s death by suicide in Tamil Nadu

Three separate FIRs were registered at Sadar police station in Thanesar on Friday, another in Shahabad Markanda in an attempt to murder the Shahabad SDM. In all FIRs, Charuni and others have been charged for damaging public property and preventing government workers from doing their work. The charges also include violations of the National Highway Act and the Disaster Management Act.

Reports said the Haryana government had begun talks with the aggrieved farmers to redress their grievances.

In the picture, it can be seen that Virat, Anushka, and Vamika were enjoying their breakfast. Virat and Anushka were all smiles for the picture and Vamika's backside and her cute ponytails can be seen in the photo.
Read more
Load more