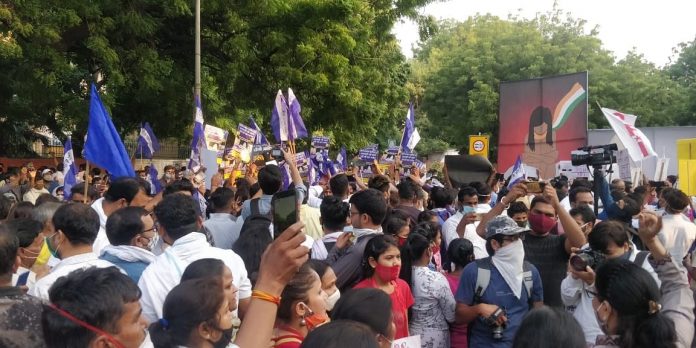 Security at India Gate was beefed up as hundreds of protesters began gathering at Jantar Mantar demanding justice for the 19-year-old Dalit gang-rape victim from Hathras district in Uttar Pradesh.

The victim died on Tuesday after being raped by four upper caste men on September 14. She breathed her last in Delhi’s Safdarjung Hospital on September 30 and her remains were cremated without her family’s consent in the early hours of the next day by Uttar Pradesh.

Initially, supporters of the Aam Aadmi Party were supposed to assemble at India Gate but changed the venue to Jantar Mantar after Section 144 of the Criminal Procedure Code was invoked in the India Gate area prohibiting any mass gathering.

Bhim Army chief Chandrashekhar Azad tweeted that the assembly will take place at Jantar Mantar owing to the imposition of Section 144 around the India Gate. He said, like a dictator, the police have closed down the entire India Gate. Azad said the Bhim Army will not let the demand for justice be weakened. Modiji will have to answer, said Azad, referring to Prime Minister Narendra Modi.

CPM general secretary Sitaram Yechury, Politburo member Brinda Karat, and CPI leader D Raja took part in the protest. The UP government has no right to stay in power. Our demand is that justice should be served, Yechury said.

The silence of the central government and the top leadership of the BJP on such a heinous crime and the UP government’s response thereafter speak volumes about the authoritarian and anti-democratic face, behaviour, history and ideology of the ruling party, he said

Yesterday, Congress leaders Rahul Gandhi and Priyanka Gandhi Vadra had attempted to walk to Hathras after UP Police blocked their vehicle. But they were not allowed to do so and set back. Similarly, a Trinamool Congress delegation of MPs was turned back on Friday.