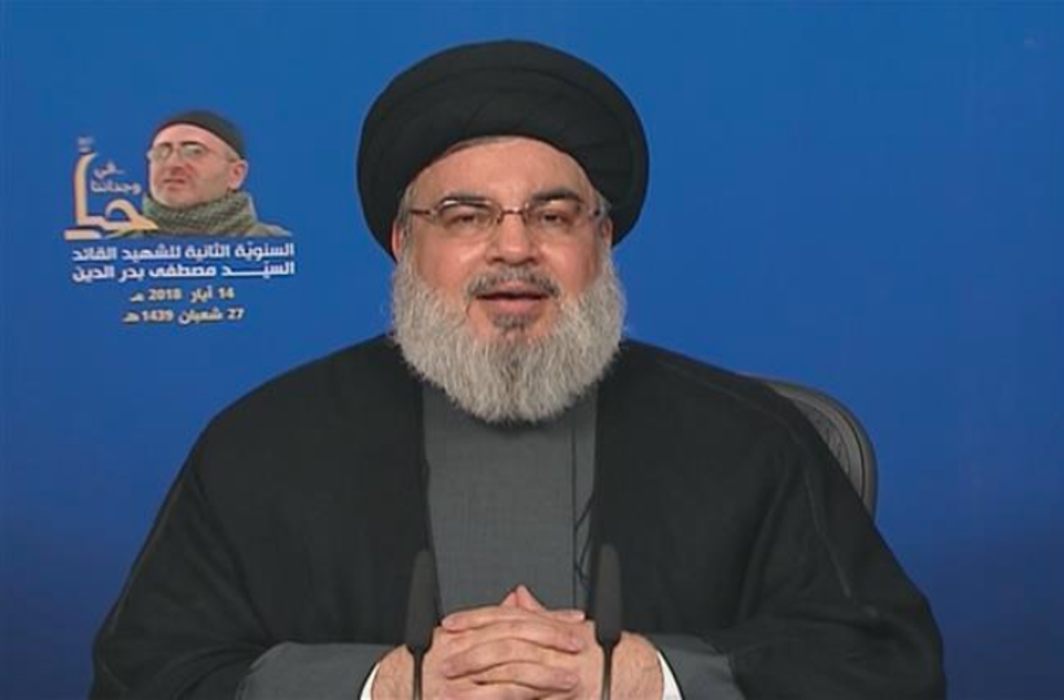 Amidst relocation of US embassy from Tel Aviv to Jerusalem and killing of almost 60 Palestinians by Israeli forces, Hassan Nasrallah, the secretary general of Lebanese Hezbollah has urged Palestinian Authority headed by Mehmoud Abbas not to sign the so-called “deal of century” touted by US President Donald trump under any pressure.

He said, “We dispelled all illusions concerning Israel’s war machine. We undermined their morale and shattered their myth of invincibility.” He said that Trump is set to officially announce the deal within coming weeks.

On Monday evening, Hezbollah leader was addressing his supporters in a televised speech broadcast live from the Lebanese capital Beirut. He stated that the “deal of century” started ever since Trump announced his decision on December 6 last year to recognize Jerusalem as Israel’s capital and to relocate its embassy there.

Hezbollah leader called upon resistance movements in the Middle East not to give in to US and Israeli pressures and described US President Donald Trump, Israeli Prime Minister Benjamin Netanyahu and Saudi Crown Prince Mohammed bin Salman as the pillars of the new deal for Palestine.

His speech was aired by Hezbollah’s Al-Manar TV and was simultaneously broadcast by several networks in the region including most of the Iranian channels.

Gaza strip is ruled by Hamas, the pro Iranian resistance group while West Bank is ruled by Palestinian Authority headed by Mehmoud Abbas.

Read More: Palestinians to US: Don’t shut our mission, will cease all links with Washington

Nasrallah, whose alliance has recently won more than half of the seats in Lebanese parliament election, noted that some Arab states were inventing religious pretexts to legitimatize Israel’s occupation of Palestinian lands. He recalled that the Riyadh regime is claiming that the occupied territories belong to Israel.

Saudi Crown Prince Mohammed Bin Salman, while meeting Jewish leaders during his US visit last month had said that Israel has a “right” to a homeland. He was quoted saying, “I believe that each people, anywhere, has a right to live in their peaceful nation. I believe the Palestinians and the Israelis have the right to have their own land,” he added.

Nasrallah pointed out, “The Palestinian cause relies on regional nations, who will never betray it. The Palestinian Authority must not sign this so-called deal of century by any means.”

Nasrallah referred to the recent US withdrawal from Iran nuclear deal by Donald Trump and underlined that Americans never tend to honour their promises and are not trustworthy in any sort of agreement.

He further said, “The United States did not care at all about the interests of its allies when exiting the atomic agreement with Tehran. Therefore, peace talks for Palestine will yield no outcome if the US is included.”

According to Al-Manar, Hezbollah leader said that a new stage of the confrontation between the resistance and the “Zionist entity”, a term used for Israel, in Syria has recently emerged. He said that the time when the Israeli enemy can hit Syria without retaliation is over.

He was referring to the recent confrontation between Syria and Israel when Israeli positions in occupied Golan were hit by dozens of rockets launched from the Syrian territories.

Read More: Can Saud And Israel Drag Trump Into War With Iran?

The Hezbollah leader has also criticized Bahraini Foreign Minister Sheikh Khalid bin Ahmed Al Khalifah for his support for Israel’s missile attack on Syria, saying, “There is no more ugliness than the remarks of this idiot and traitor.”

Saudi Arabia’s Crown Prince Mohammed Bin Salman, while meeting Jewish leaders in US, had also reportedly said that Palestinian leadership should accept whatever peace terms are offered by the US and stop complaining.

He was quoted saying, “In the last several decades the Palestinian leadership has missed one opportunity after the other and rejected all the peace proposals it was given. It is about time the Palestinians take the proposals… or shut up and stop complaining.”

According to Middle East Eye a Palestinian official had recently said that the “deal of the century” calls for having a Palestinian state with provisional borders on half of West Bank and the Gaza Strip, without Jerusalem, and calls for humanitarian solutions to the refugee issue. The deal calls for building  a new Jerusalem for the Palestinians from the surrounding villages and communities.

Observers believe that Palestinian Authority President Mehmoud Abbas  would be forced by his supporters to oblige and act as suggested by Hezbollah leadership. Abbas has reiterated several times, since Trump’s Jerusalem move, of US losing credibility of an “honest broker” in the Middle East crisis.