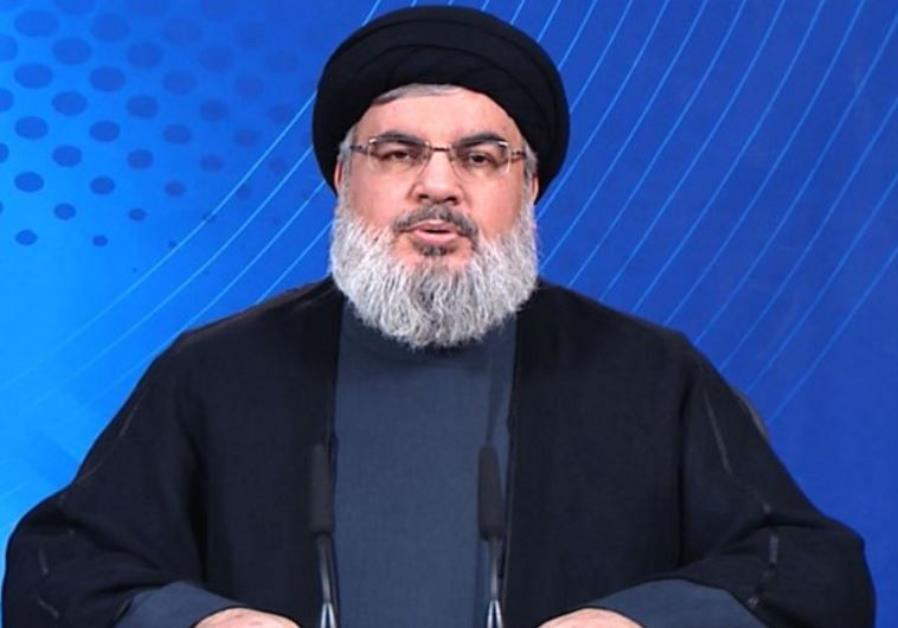 Amid heightened tension in the Middle East between Saudi led Arab nations and Iran along with its regional allies, Hezbollah leader Hasan Nasrallah has denounced Arab League for describing Hezbollah as a “terrorist organization” and denied of his group’s involvement in sending ballistic missiles to Houthis in Yemen.

In a live telecast on his group’s mouthpiece Al-Manar TV, from Beirut, on Monday evening, Hezbollah leader called the Arab League allegations during their Sunday meeting in Cairo as “ridiculous, absurd, silly and completely baseless”.

The statement issued at the end of an emergency Arab League foreign ministers’ meeting held in Egyptian capital Cairo on Sunday called by Saudi Arabia had claimed that Hezbollah sent ballistic missile to Yemen’s Houthi Ansarullah. They alleged that Hezbollah was also responsible for the missile that was recently launched by Yemen’s Ansarallah targeting on Riyadh airport.

Earlier Saudi Arabia called the attempted missile attack on Riyadh’s airport as an act of war” by Iran and vowed to retaliate.

Saudi Arabia claimed the missile was shot down before reaching its target while Ansarallah claimed that the missile hit the target successfully.

Hassan Nasrallah’s rare “address to the nation” came at a time when Lebanese PM Saad Hariri is currently visiting France after his sudden resignation on November 4 while in Saudi Arabia. Hariri’s two children were left behind in Riyadh.

Hariri’s Future Movement Party sources had revealed that PM may travel to other European and Arab countries before returning to Beirut.

Hassan Nasrallah, who looked humorous and composed during his speech, said “I categorically deny any role of any member of Hezbollah in launching this missile or even a pistol” to Yemen, Bahrain, or Kuwait. “We have never transferred long-range missiles to any Arab state, but we did transfer arms to the forces of resistance in Gaza Strip and to fighters in Syria,” he acknowledged.

U.S., Israel and Saudi led Arab nations call Hassan Nasrallah and his Hizbollah group as terrorists while people on Arab streets see Hezbollah as a successful resistance force against Israel. Hezbollah had forced Israeli forces to withdraw from south Lebanon in year 2000 and faught against Israeli forces for 34 days in 2006.

Hezbollah leader denounced Arab League for failing to condemn or call for an end to the war in Yemen.  He said, “Ask Saudi Arabia to stop the crushing of children’s bones and its massacres. Press for a political solution, this blatant and suspicious silence in the Islamic world is unacceptable.”

Saudi Arabia led regional alliance with US and Israeli support has been pounding Yemen since March 2015 in an attempt to crush Houthi Ansarullah movement and reinstate its ally former President Abd Rabbuh Mansur Hadi. He is presently given shelter in Riyadh to lead Yemen’s government in exile. More than 12,000 people have been killed.

World Food Program head Stephen Anderson, has on Monday, described the situation s “heartbreaking” saying that of a population of 26 million, 17 million do not know where their next meal is coming from and seven million are totally dependent on food aid.

Hezbollah leader called Muslim nations and their governments saying, “You can listen to Israeli comments on coordination between them and some Arab countries, especially Saudi Arabia.” “It’s enough to quote the criminal former Israeli Defense Minister Yaalon who said ‘It is not by accident that Al-Jubeir says in Arabic what we say in Hebrew’,” he recalled.

He cautioned Palestinians about the recent developments saying, “There are Arab countries that want to forge ties with Israel – namely Saudi Arabia. The interview by [the head of the Israeli army Gadi] Eizenkot to the Saudi website Elaph is a dangerous development for the Palestinians.”

Referring to US President Donald Trump’s ‘peace’ initiative he said, “There is pressure on Palestinian to accept dictates that will kill the Palestinian issue under what some are calling the ‘deal of the century’”.

He mocked the Arab League foreign ministers by saying: What have you contributed to the victory against Daesh (IS)? “While Hezbollah was liberating Bou Kamal province (in Syria) from IS, which is labeled as terrorist by the entire world, these people were calling Hezbollah terrorist!”

However, Hezbollah leader revealed that US air force secured an aerial coverage for IS terrorists, saying they were moving openly and the American Air Force even prevented Russia from attacking the terrorists in Syria.

Referring to Iraq’s achievement against Daesh terrorists, Nasrallah said that Iraqi government has, last week, announced the liberation of the last Iraqi city from IS control. “ISIL as an organization and a military structure has ended in Iraq and the Iraqi forces have reached the Syrian border. Hezbollah’s mission in Iraq has been accomplished with the Islamic State group’s defeat.”

He disussed about Hezbollah’s presence in Iraq’s war  theatre  saying, “We had sent a large number of military advisers to Iraq. These brothers will return from Iraq when Iraq announces the eradication of the ISIL group. We will mull our presence in Iraq with the coordination of the Iraqi forces, if there’s no more need for our presence there our forces will withdraw to other areas where they are needed.”

While discussing PM Saad Hariri’s recent resignation from Saudi Arabia, the Hezbollah leader said that they were awaiting his return and do not consider him as resigned until he returns.

According to Times of Israel, Defence Minister Avigdor Liberman had, on October 11, said the next war in Israel will see the Israel Defense forces fighting against a coordinated Syrian-Lebanese front as well on the southern front with Hamas controlled Gaza. He was quoted saying, “The Lebanese army has become an integral part of the Hezbollah apparatus under its command.”

However, a Lebanese military source denied the allegation while talking to Beirut based Al Joumhouria, said that Liberman’s statements were “totally contrary to the reality” and “hold contradictions upto a degree that they cannot be taken seriously.”