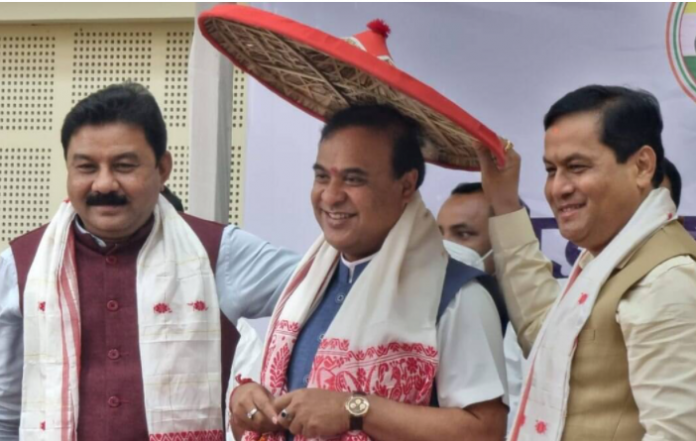 After long-drawn speculation on who would lead the new government in Assam, BJP’s legislature party on Sunday declared Himanta Biswa Sarma would succeed Sarbananda Sonowal as the next chief minister.

Succeeding Sonowal, the BJP’s Himanta Biswa Sarma on Monday was sworn in as the 15th Chief Minister of Assam, along with 13 members of his cabinet in the presence of Governor Jagdish Mukhi, BJP President JP Nadda and other leaders. Urkhao Gwra Brahma, the chief of BJP ally United People’s Party Liberal, also took oath amid Covid restrictions at Srimanta Sankaradeva Kalakshetra in Guwahati.

According to party sources, Sarma’s name was proposed by Sonowal

Prime Minister Narendra Modi congratulated Sarma and said he was confident this team will add momentum to the development journey of Assam.

Why was Himanta Biswa Sarma chosen to be Assam CM ?

Sarma is no stranger to controversies. In the run-up to the elections, he was criticised for his polarising comments, in which he often targeted the Bengali-origin Muslim community of the state, especially perfume baron and MP Badruddin Ajmal, who leads the AIUDF, a party known for its strong base among minorities and a Congress ally.

In April, the Election Commission had banned Sarma from campaigning for 48 hours for threatening to put Hagrama Mohilary, the chief of the Bodoland People’s Front (BPF), another Congress ally, behind bars by filing a case with the NIA.

Soon after the EC relaxed the ban, Sarma resumed his campaigning duties. There have also been allegations of corruption against Sarma in the Saradha and Louis Berger scams.

Sarma, BJP’s trouble-shooter and the go-to man in the Northeast, was instrumental in the party’s two consecutive victories. Sarma enjoys the support of a majority of BJP legislators besides its allies, Asom Gana Parishad (AGP) and the tribal United People’s Party Liberal (UPPL).

Had the BJP top brass allowed Sonowal to continue as CM, it could have sparked an internal feud in the party’s Assam unit, something Modi-Shah cannot afford after the West Bengal rout.

How did the BJP do in the polls?

In the results announced for the 126-member Assam Assembly on May 2, the BJP won 60 seats while its alliance partners AGP got 9 seats and UPPL 6. In Assam, the BJP-led National Democratic Alliance (NDA) has secured 75 seats while the ‘grand alliance’ led by the Congress bagged 50.

Read Also: Maharashtra gets only 36,000 Covaxin doses in response to states health minister demand of around 5.5 lakh Covid second dose

In the 2016 Assembly polls, the BJP had projected Sonowal as its chief ministerial candidate and won, forming its first government in the northeast. This time, the party had maintained that it would decide who would be the next chief minister after the elections. Sarma’s defection to the BJP from the Congress put paid to the grand old party’s chances even with late Tarun Gogoi leading it.