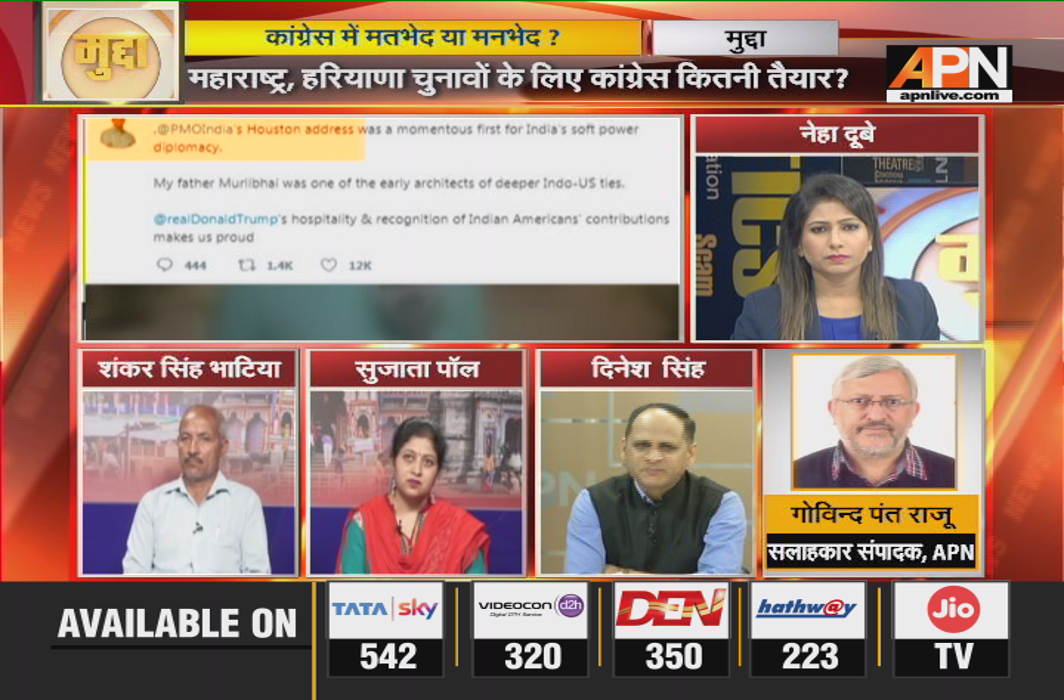 Prime Minister Narendra Modi’s “Howdy Modi” event in the US has divided the Congress Congress leader Milind Deora has praised the PM, calling it in a tweet, “a momentous first for soft diplomacy”. On the other hand, other Congress leaders have criticised the PM, saying the PM should not have been a star campaigner for Trump. APN’s popular debate Mudda discussed the situation in the Congress. Anchorperson Neha Dubey posed the questions to panelists, including the BJP leader Dinesh Singh, social worker Sujata Paul, SP’s Atul Saxena, noted scribe Shankar Singh Bhatia and APN consultant Govind Pant Raju.

Singh said: “This is a win not just for the BJP, but for the entire nation. Only two groups look unhappy. One is Pakistan, the other are some leaders in the Congress. There is confusion in the Congress. I don’t think Congress is really looking for ache din. Opposition needs to be strong. Unfortunately, they end up beating India’s agenda. For the Congress, it is ‘self first, party next and nation last’. We don’t even now know what exactly is the Congress thinking, What line are they taking? Look at this, the EVM problem was raised by the Congress in an Arabic nation? Was that the right platform to talk about issues assailing at home?”

Saxena said: “’Howdy Modi’ has proved what a big event manager Modi is. Who will set right the economy that is in a disarray? First, the PM needs to look at the problems at home.”

Paul said: “Milind Deora has congratulated the PM. No doubt the event management was good. There were protests against Modi too, but no one is talking about that. We are a poor nation, I don’t know what we shall gain by such events. Whether Democrats or Republicans win, how will that affect the economy here? If Trump does not win, what will be Modi’s reaction? PM is talking about single use plastic at home, but in the same programme in the US, there was rampant use of single use plastic.”

Singh said:” It’s a question of perspective. SP leader needs to know that SP needs to set its own house in order. What we gained from the Houston jamboree? It is because of Modi that Trump raised issues of Islamic terror. Is that no mean achievement? PM knows pretty well what needs to be said at a public forum. It is only the Congress that’s not with PM, all leaders of the world are with the PM. How can you dismiss this as event management? Everybody tries, but others don’t have any product to talk about. Modi is marketing for the nation. Today, America is with us.”

Bhatia said: “Congress does not have a strong leader. Modi ji is a popular leader.”

Singh said:”You have to assess Modi as per what’s happening today. Today the reality is that Trump praised Modi and Modi praised Trump. I would like to say that for the first time at least we are talking about single use plastic.”

Paul said: “If there was no difference between the PM’s talk and actions, he would have made sure there was no single use plastic at the event. This event was funded by our money.”

Raju said: “Milind Deora said what he wanted to say. It’s laughable people asking what India has achieved by ‘Howdy Modi’. For an American president to hold hands with India like this is itself an achievement. The event has boosted India’s image. When PM said what all is being done in India, it was a message to NRIs that India has changed. Even if it’s event management, it’s good, and it cannot be dismissed by using such terminologies.”

Bhatia said: “Congress problem is of leadership, they have been unable to find out any alternative, acceptable to all, except the Gandhi family.”

Paul said:”It’s not that there is nothing good in the Congress. They need to emphasise more of that.”