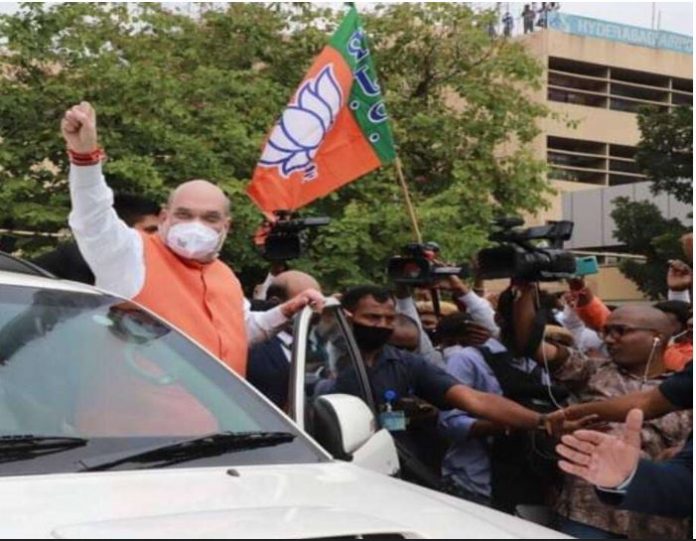 The BJP on Friday emerged as the second-largest party in the Greater Hyderabad Municipal Corporation elections. The party has grown from 4 wards in 2016 to 48 now. The party’s success comes at the cost of the regional Telangana Rashtra Samithi (TRS), which rules Telangana of which Hyderabad is the capital.

The TRS won 55 wards compared to the 99 wards won in 2016, the GHMC election is for 150 wards. The shock to the TRS comes just a week before the K. Chandrashekhar Rao government is set to complete two years in office in its second term. The TRS had grown in the state on the back of the statehood campaign for 31 districts in the erstwhile united state of Andhra Pradesh. Now, the sheen seems to be coming off if one goes by the BJP’s performance in this civic poll. Though municipal elections are no bellwether for the assembly, where larger issues are at play, the BJP has reasons to be happy at its performance.

At the end of the BJP’s extremely polarised campaign, where it went after the AIMIM over Rohingyas, Bangladeshis, Pakistanis and Afghanis and what not, the people of Hyderabad seem to have fallen for the rhetoric.

Now, the TRS is short of the numbers to claim the Mayor’s seat on its own. It needed at least 67 divisions to have its own mayor without the support of any other party, as it already has 31 ex-officio votes made up of its MPs, MLAs and MLCs. But in all probability, it will ally with its Assembly poll partner, the All India Majlis-e-Ittehadul Muslimeen (AIMIM) which won in 44 wards.

Though the BJP unleashed its gaggle of star campaigners, to much ridicule from Asaduddin Owaisi, Home Minister Amit Shah, BJP chief JP Nadda and Uttar Pradesh Chief Minister Yogi Adityanath seem to have turned the Hyderabadis to vote for their party.

The TRS seems to have been hit by its anti-incumbency and resentment among flood-affected families due to discrepancies in relief distribution.

With this win, the BJP emerged as the biggest gainer in GHMC elections. The BJP has also increased its vote share by making a meal of the TRS and the Congress. The BJP is treating this victory as its launchpad for the Telangana Assembly election 2023. The BJP is looking to fill the political vacuum of the Congress in Telangana and make inroads into TRS-AIMIM’s stronghold with strong Hindutva rhetoric.

The worst performer in the civic polls is the Congress which failed to improve its performance since the last polls. It had won two seats in 2016 and managed to win two this time.

TRS working president K. T. Rao had hoped for another 25 seats in GHMC elections. He said his party lost 12-13 seats by a slim margin of 200-300 votes, which were netted by the BJP. On the other hand, Asaduddin Owaisi’s AIMIM has emerged as the kingmaker by winning 44 wards with 10 ex-officio members in hand.

The BJP, however, has given a strong fight to AIMIM and much of its campaign was targeted at Owaisi and the party, the AIMIM has been able to maintain its seat share. Just like 2015, this time too AIMIM has won 44 seats in the civic polls.

Champions League: After Liverpool, PSG victory, winning is only option for Barcelona and Man United

After Liverpool, Paris Saint-Germain and Real Madrid victory on Tuesday, Manchester United and Barcelona are desperate for a win in the Champions League.
Read more
Load more