Home Latest world news “I Would Have Been Killed, Along With My Father”
Want create site? Find Free WordPress Themes and plugins.

How a U.S. Special Immigrant Visa program likely saved a life? Its continuation and expansion could save more

By Sher A. Nader

In July 2016, I welcomed my friend Muhammad Mihdi, his wife, and their 2-year-old son at San Francisco International Airport. They arrived here from Kabul, Afghanistan, on Special Immigrant Visas (SIVs) granted to those Afghans and Iraqis who have worked for or on behalf of the U.S. government in Afghanistan and Iraq and as a result are facing an ongoing threat in their country. I was accompanied by Barbara Preston, a retired doctor who is a volunteer for No One Left Behind (NOLB). NOLB is a nonprofit organization that supports and advocates for Afghan and Iraqi translators before and after their arrival in the U.S.

Mihdi worked for the U.S. Military in Khogyani, one of Afghanistan’s most volatile districts. It is in the southern part of Nangarhar province, which borders Pakistan. Although he knew that by working with Americans in Afghanistan he was putting his life and the lives of his family members at substantial risk, he never thought of giving up. In 2012, his work at Khogyani ended but the threats to his life followed him everywhere – even to his home in Kabul.

Every time I talked to Mihdi while he was still in Afghanistan, his descriptions of the security situation worried me greatly.

“Before leaving for work in the morning, I can’t stop hugging and giving love to my little son, as I know there’s no guarantee I will get back home in the evening,” Mihdi told me a few months before his visa was issued. His voice conveyed a sense of the danger he faced daily.

When he received his SIV, he immediately arranged to travel to the U.S. He was lucky. If he hadn’t received his visa at that time, he might not be alive today. In his own words, “I would have been killed, along with my father, some months later.”

The attack began at 9 a.m. For the next seven hours, the gunmen went from ward to ward, killing everyone in their sight – including doctors and patients. At least 100 people were killed and hundreds of others injured.

Mihdi’s father had been admitted to the same hospital a few days earlier after doctors found his asthma was getting worse. His ward was on the fourth floor. “My mother and brother-in-law were there, too. They took him food and remained there to help him through most of the day, every day,” Mihdi told me when I visited him at his home a day after the attack. “There were 15 more people in the same ward.”

As soon as Mihdi learned of the attack he tried to reach his parents by phone. “The truth,” Mihdi learned, “was that my father had been killed and my mother was injured. I couldn’t believe my mother was alive until I heard her voice on the phone. Thankfully, my brother-in-law was unhurt.”

A few days after the incident, when I called and spoke to Mihdi’s mother, she still sounded shocked and terrified. “As soon as we heard the first explosion, we closed the ward’s entrance and took positions under the beds,” Mihdi’s mother explained while sobbing.

“We continued to hear explosions and gunfire for hours but no one entered our ward. Around 2 p.m., all of a sudden, there was absolute silence and we thought the attack was over,” she recalled. “Then one of the men in the ward moved toward the door to open it. Others urged him to wait for the arrival of security forces, but he didn’t listen.

“As soon as he opened the door, a bullet pierced through his head. It seemed as if the gunman had been waiting behind the door. He started shooting everyone he saw,” Mihdi’s mother said.

Mihdi’s father was shot in chest, and his mother in the leg. His brother-in-law was uninjured – Mihdi’s mother had covered him by putting herself over him. What she did was nothing short of heroic.

“I saw my husband dying in front my eyes but couldn’t do anything. I was bleeding severely,” Mihdi’s mother recalled. The incident left her with serious psychological problems. For the next few weeks, she would scream in her sleep several times during the night and remain restless throughout the day. She hasn’t fully recovered yet.

Since December 2014, 11,000 SIVs have been awarded to Afghan applicants by the U.S. State Department. Thousands more were awarded in previous years dating back to the program’s creation in 2009. Some of these visa recipients, and others from Iraq, might not be alive now had their visas been denied or even delayed. For others like Mihdi who risked their lives in the service of the U.S. missions in Afghanistan and Iraq, the continuance of this visa program can be the primary lifeline to truly ensure that no one is left behind.

Sher A. Nader is a freelance writer based in California, USA. He can be reached @ sher.siraj@gmail.com 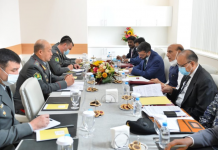