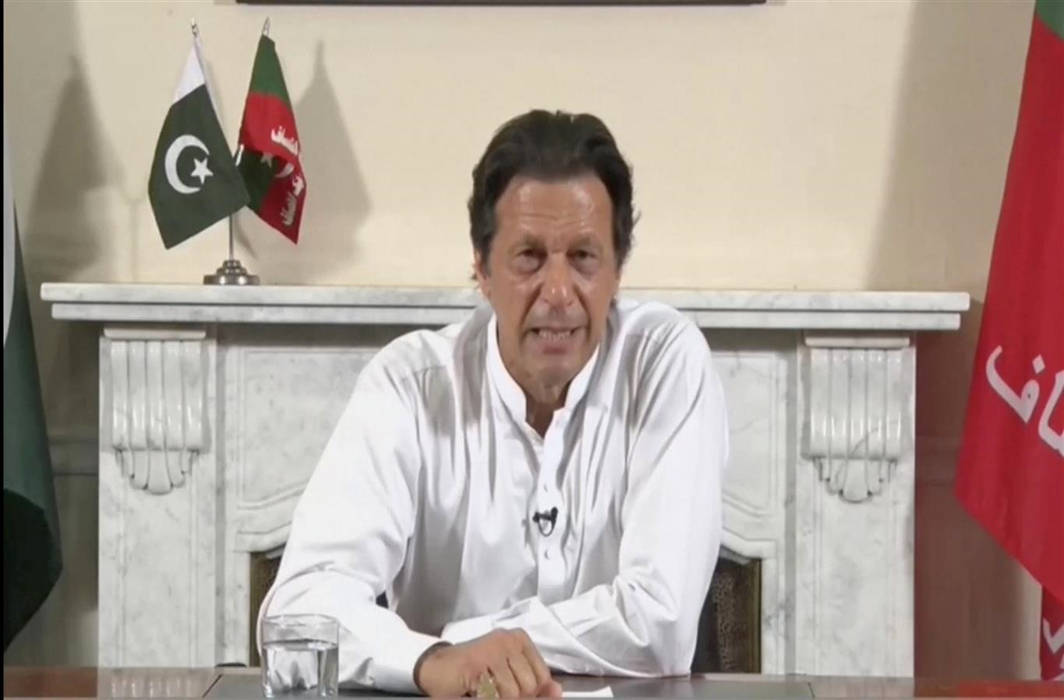 Hours after a Indian and Pakistani air forces clashed along the Line of Control in the morning today (Wednesday, Feb 27), Pakistan Prime Minister Imran Khan called for easing of tension saying an escalation of tension may spin things out of control.

Khan said the “sole purpose” to carry out strikes across LoC was to tell India that “if they can come here, we can go there too”. In his address to Pakistan, Khan said two Indian MIG 21s which “crossed the LoC” were shot down.

“From here, it is imperative that we use our heads and act with wisdom,” he said. Mentioning the Pulwama attack in which 40 CRPF men were killed when an explosives-laden vehicle crashed into a CRPF convoy on February 14, Khan said he “understands the grief” but “better sense must prevail” and the issue must be “settle(d) with talks.” Pakistan based terror outfit Jaish-e-Mohammad had claimed responsibility of the attack.

“We offered peace to India after what happened in Pulwama. I understand the pain of the families. I have visited hospitals and seen the pain of people affected by violence. We offered India that we would investigate. We wanted to cooperate and were ready to do so. I feared that India would still take action, and I had, therefore, warned India against aggression,” he said.

The address came hours after fighting between the air forces of the two countries in Jammu and Kashmir. India has said that it shot down a Pakistani fighter jet but also lost one of its own jets and the pilot was missing in action.

Pakistan has claimed that it shot down two Indian jets in the fighting and has two pilots in its custody. Khan said Pakistan sent its air force only after ascertaining the damage on the Pakistani side in Indian air strikes on a Jaish-e-Mohammed terror training camp in Pakistan Tuesday. He said Pakistan also ensured that there were no casualties or collateral damage in India in the strike Wednesday.

“This was just to let India know that we can also do this,” he said. “Two Indian MiGs crossed into Pakistan and we shot them down. The pilots are with us,” he said.

“The question is where do we go from here? It is very important we use our intelligence,” the Pakistani PM said.

Asserting that war is not a solution, Khan said, “If it (tensions between the two countries) escalates, it will no longer be in my control or in Modi’s”.

“All wars are miscalculated, and no one knows where they lead to. World War I was supposed to end in weeks, it took six years. Similarly, the war on terrorism was not supposed to last 17 years. If this escalates, where will it go from here? It will not be in my control or Narendra Modi’s control. I ask India: with the weapons you have and the weapons we have, can we really afford a miscalculation?” asked the Pak PM.

Meanwhile, the Indian government has said Pakistan had used its Air Force to target military installations on the Indian side in response to India’s counter-terror operations against Jaish-e-Mohammad terror camp in a pre-dawn IAF strike in Balakot Tuesday. Pakistan’s attempts were foiled successfully, the MEA said, adding that one Pakistan Air Force fighter aircraft was shot down by IAF.

The MEA later said India lost one MIG 21 and one pilot was “missing in action”, adding that it was “ascertaining Pakistan’s claims”. Earlier in the day, Pakistan claimed to have captured two IAF pilots. The Pakistan army had released a video in which the pilot is seen identifying himself as Wing Commander Abhinandan Varthaman.

Statement by foreign inisters of India, China and Russia

In another development, India, China and Russia have said those responsible for “committing, orchestrating, inciting or supporting terrorist acts” must be held accountable, as they urged the international community to strengthen the United Nations-led global counter-terrorism cooperation.

A joint statement issued after the meeting read: “The ministers stressed that those committing, orchestrating, inciting or supporting terrorist acts must be held accountable and brought to justice in accordance with existing international commitments on countering terrorism, including the UN Global Counter-Terrorism Strategy, relevant UN Security Council resolutions and the FATF standards, international treaties, including on the basis of the principle ‘extradite or prosecute’ and relevant international and bilateral obligations and in compliance with applicable domestic legislation.

“The ministers strongly condemned terrorism in all its forms and manifestations. They called on the international community to strengthen UN-led global counter-terrorism cooperation by fully implementing the relevant UN Security Council (UNSC) resolutions and the Global Counter-Terrorism Strategy in accordance with the Charter of the United Nations and the principles of international law, while respecting sovereignty and independence of all states, and expeditiously finalising and adopting the UN Comprehensive Convention on International Terrorism at the earliest.”

Earlier in the morning, during her opening remarks, Swaraj sought to draw the attention of the members of RIC to the Pulwama terror attack, in which 40 CRPF personnel were killed and the attack was claimed by the Jaish-e-Mohammed (JeM).

A day after the Indian Air Force struck a JeM terror camp in Balakot, Pakistan, Swaraj added that India does not want further escalation of tension with Pakistan, and said it would act with “responsibility and restraint”.

US asks for restraint

Amid the heightened tension, US has urged Pakistan and India to exercise restraint. Secretary of State Mike Pompeo said he has spoken to Pakistani foreign minister Shah Mehmood Qureshi and India’s External Affairs Minister Sushma Swaraj, and urged the two nuclear-armed rivals to “avoid escalation at any cost”. Meanwhile, Sushma Swaraj on Wednesday raised the recent Pulwama suicide attack on CRPF soldiers in her bilateral meeting with Chinese counterpart Minister Wang Yi.

In its outreach to international community, while India has got an invitation to attend the meet of Organisation of Islamic Countries (OIC), Pakistan foreign minister Shah Mehmood Qureshi said he had decided to boycott the OIC since his Indian counterpart Sushma Swaraj will be in attendance at the event.

“I have spoken to the United Arab Emirates foreign minister and have expressed my reservations over her invitation. I have made myself clear that India has shown aggression,” he said.

The OIC is a grouping of 57 countries, most of whom are Muslim majority. It has usually been supportive of Pakistan and, often sided with Islamabad on the Kashmir issue.

Imran Khan also had a telephonic conversation with UAE Crown Prince Sheikh Mohammed bin Zayed Al Nahyan as well as Saudi Crown Prince Mohammad bin Salman over the development. On the request of Pakistan, the OIC summoned an emergency meeting of its Kashmir Contact Group at its General Secretariat in Riyadh on Tuesday.

The Contact Group expressed deep concern over the heightened tension and called for immediate de-escalation in the region, Pakistan Foreign Office said.