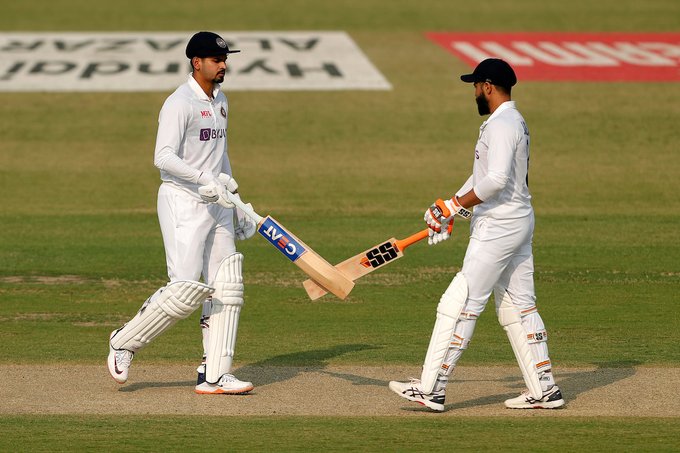 Team India dominated day 1 of the first Test match against New Zealand in Kanpur’s Greenpark stadium. The match was called off after 84th over as the lights were not enough on the ground.

Men in Blue scored 258-4 in 84 overs of the match, young debutant stole the limelight with his unbeaten 75 runs, including 7 fours and 2 sixes, while opening batsman Shubman Gill (52) and all-rounder Ravindra Jadeja (50*) also scored fifties on a batting spin-friendly pitch.

Batting first, team India did not start well as they lost opening batsman Mayank Agarwala at the score of 21 when Kiwi pacer Kyle Jamison took his wicket in the 8th over. After that Gill added a 60-run partnership with veteran Cheteshwar Pujara (26). India looked settled for a big score at 100-2, but with the wickets of Pujara and skipper Rahane, the scoreline was 145-4.

However, Shreyas Iyer and Jadeja saved the day for the Indian team, adding an unbeaten 113 run partnership between them. The match on day 1 ended after the poor light on pitch.

The New Zealand cricket team are yet to win any Test series in India in the last 33-years.