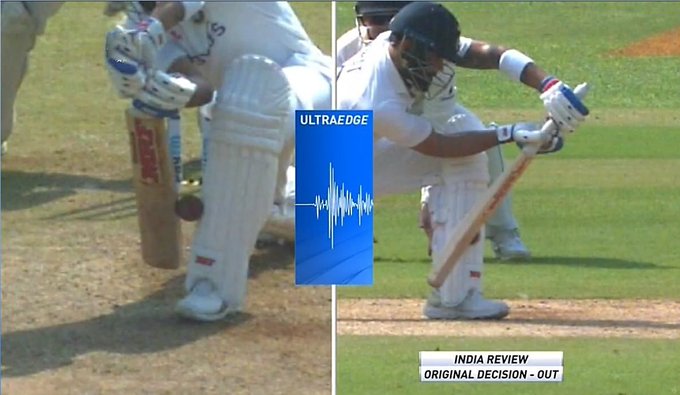 Indian captain Virat Kohli departed for a duck in his comeback match against New Zealand in the second Test match of the series in Mumbai’s Wankhede stadium.

Virat Kohli came to bat in 30th over when veteran Cheteshawr Pujara also went out for a duck in the same over by Kiwi spinner Azaz Patel. Azaz Patel, first he dismissed Pujara on the second ball of the 30th over and then trapped Indian skipper Kohli for a duck.

But the decision was not very clear as it seemed that the ball first hit the bat before hitting the pad. However, even after review by the third umpire, it was given out as, the review didn’t clearly confirm whether the Indian skipper is out or, not out.

From 80-0 to India went 80-3, as Shubman Gill, Pujara and Kohli got out within a span of 15 balls. Though, opening batsman Mayank Agarwal and last match’s debutant hero Shreyas Iyer took things into their own hands by smashing some quick boundaries in the next couple of overs.

After this incident fans on Twitter showed their rage against the third umpire for the wrong decision, while some said that Virat’s time is gone.

Here are some of the best tweets on Virat Kohli getting out on duck:

The awful times of Virat Kohli continue, as the ace cricketer is struggling with his form and is yet to make a century in more than 2 years.

While Kiwi skipper Kane Williamson was also ruled out of the match due to injury and Daryl Mitchell replaced him in the Blackcaps squad.