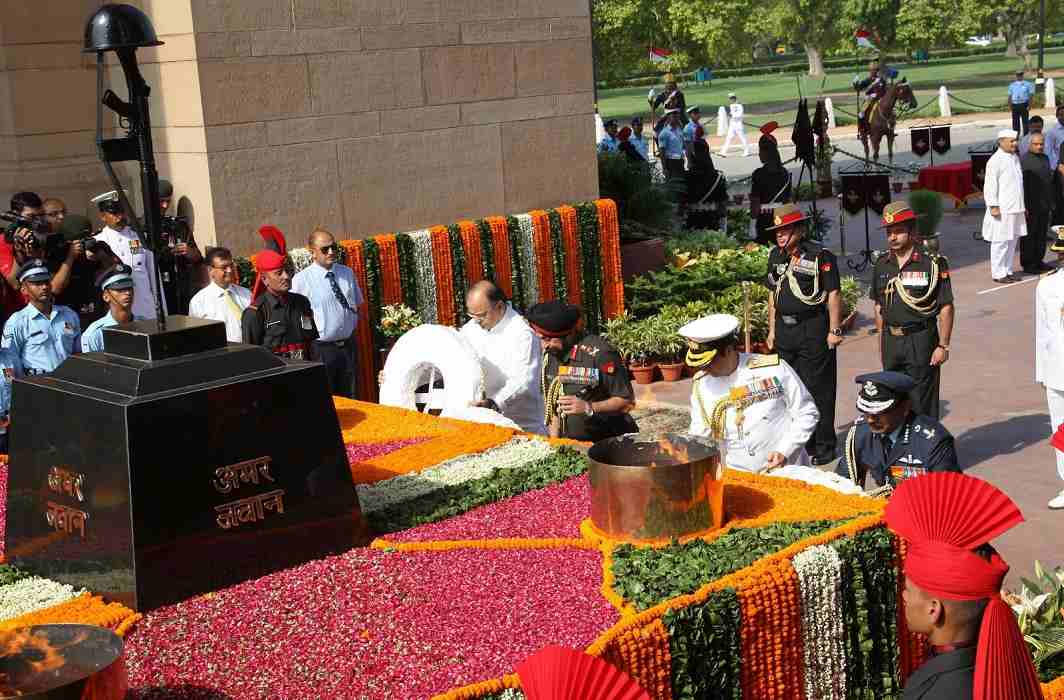 India celebrated the 18th Kargil Vijay Diwas on Wednesday to mark its victory in the Kargil War of 1999 against Pakistan and honour the Indian soldiers who sacrificed their lives on the battlefront.

Prime Minister Narendra Modi took to Twitter to hail the Indian Armed Forces for their valour and sacrifice.

Remembering our brave soldiers who fought gallantly for the pride of our nation & the security of our citizens during the Kargil War.

In the national capital, Defence Minister Arun Jaitley visited the Amar Jawan Jyoti at India Gate to pay homage to the martyred soldiers in the presence of the Chiefs of the Armed Forces. Similar functions were organised across the country, in particular at the various War Memorials erected in different states, like the one in Dras tehsil of Kargil. Dras was the epicentre of the Kargil War and is situated in the foothills of Tololing Hill while the Tiger Hill is visible just across it (both areas that saw massive infiltration by the enemy before being re-captured by the Indian forces).

The conflict – code named Operation Vijay by the Indian Army – that lasted for about two months ended on July 26, 1999 and was fought mainly in the Kargil sector of Jammu and Kashmir. Although initially, the infiltration by the Pakistan Army and even non-state actors in the conflict-ridden state – a matter that most defence experts have in the years since termed as a colossal failure of both the Military Intelligence and the Indian government’s other intelligence gathering agencies – caused heavy casualties in the Indian Armed Forces, Pakistan was finally defeated in the War and a ceasefire was announced on July 26, 1999. India pegged the official figure of casualties in the war at 527, while those wounded numbered 1363.

Dismissed brigadier claims Chinese soldier were present in Kargil in 1998

Brigadier Surinder Singh, who was dismissed from the Indian Army after the Kargil war on the charge of allegedly leaking classified documents, has alleged in an interview to a national daily that a nine-page intelligence brief prepared in August 1998 had pointed at the presence of Chinese soldiers in the Kargil sector. Singh, who was then commander of 121 Infantry Brigade, claimed that he had sent the brief to the then General Officer Commanding (GOC) of the area on August 25, 1998. It is now part of court record at the Armed Forces Tribunal (AFT), Chandigarh, which is hearing a petition filed by Brig Singh against his dismissal.

A day before the Kargil Vijay Diwas, some unidentified miscreants vandalised the Rezang La war memorial in New Delhi’s Palam area. Members of the Martyr’s Family Welfare Foundation found broken benches and damaged plaques at the memorial when they visited it on Tuesday morning to plan an event to mark the Kargil Vijay Diwas. The Rezang La Memorial, spread across 7,000 sq feet, had been inaugurated by the then Haryana chief minister Bhupinder Singh Hooda on December 29, 2012. It was constructed to honour 114 martyrs who sacrificed their lives during the historic battle of Rezang La pass in 1962 with China. A majority of war heroes of the 13th Kumaon Regiment were from south Haryana districts of Gurgaon, Rewari and Bhiwani-Mahendragarh.

An FIR has been registered against unknown persons under section 427 (mischief causing damage to property) and prevention of damage to Public Property Act.