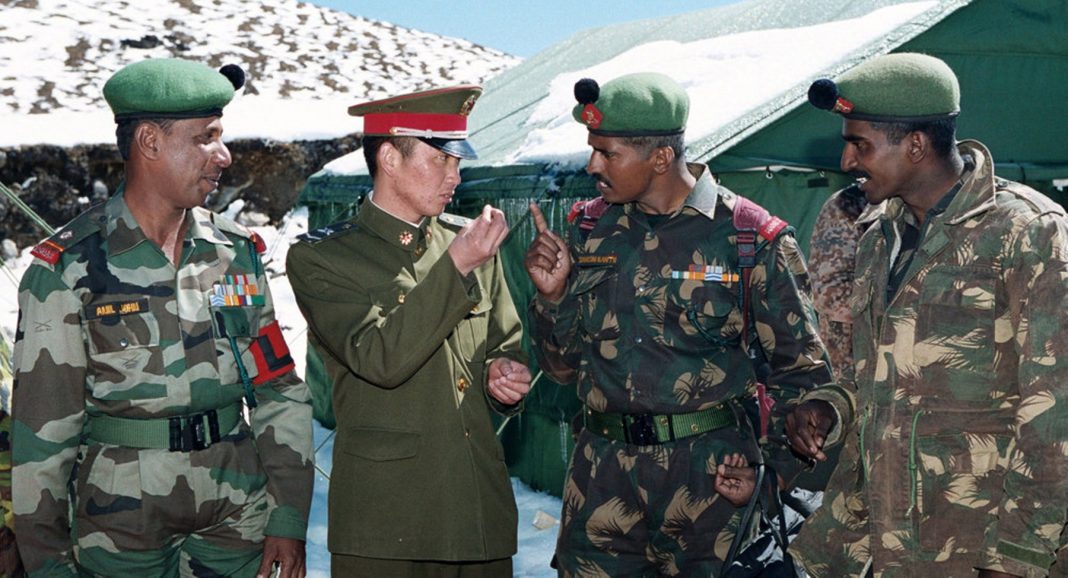 The supposed bonhomie between India and China, speculated upon after the Modi-Jinping mutually congratulatory speeches at Hamburg, evaporated fast.

After India claimed the two leaders discussed “a range of issues”, China on Monday said that Chinese President Xi Jinping and Indian Prime Minister Narendra Modi had “no bilateral meeting” on the sidelines of the G20 summit in Hamburg and that withdrawal of troops by India from Doklam was a pre-condition for any meaningful dialogue between the two sides.

Along with this came a bluntly aggressive piece in China’s state-controlled media from an analyst at Chinese think tank, bringing in Kashmir into the picture to say a “third country’s” army could enter Kashmir at Pakistan’s request, using the “same logic” the Indian Army used to stop the Chinese military from constructing a road in the Doklam area in the Sikkim sector on behalf of Bhutan.

Such statements erased any notions about emerging signs of easing of tension between India and China. On Saturday, Ministry of External Affairs spokesperson Gopal Baglay had talked about Modi and Jinping discussing a “range of issues” but refused to elaborate on it. “We have tweeted that the two leaders discussed a range of issues. A range of issues means a range of issues. I don’t want to add anything further… I leave it to you to draw your conclusion,” Baglay said.

On Monday, Chinese Foreign Ministry spokesperson Geng Shuang, when asked about the issue discussed between the two, said, “According to my information, the two said leaders did not hold any bilateral meeting.” He said Jinping chaired an informal meet of BRICS leaders and Modi was among them. He said the withdrawal of Indian troops from Doklam was the pre-condition for any meaningful dialogue between the two countries.

In the article in Global Times, Long Xingchun, Director at the Centre for Indian Studies at China West Normal University, said that a third country’s troops could enter Jammu and Kashmir on behalf of Pakistan like India did in the Doklam region. He said that this move would be justified as it would be on the lines of the “same logic” that the Indian Army has been using to halt China’s road construction project at the Sikkim-Bhutan-Tibet trijunction.

“Even if India were requested to defend Bhutan’s territory, this could only be limited to its established territory, not the disputed area,” said Xingchun. “Otherwise, under India’s logic, if the Pakistani government requests, a third country’s army can enter the area disputed by India and Pakistan, including India-controlled Kashmir,” the article said.

Elsewhere, the Global Times quoted Lin Mingwang from the Institute of International Studies at Shanghai’s Fudan University as saying that “China has nothing to do with the situation in Kashmir, but it would be unwise for India to engage in two conflicts at the same time”.

China has already been constructing roads and building infrastructure in Pakistan occupied Kashmir for years, despite acknowledging it as a disputed territory between India and Pakistan.

Xingchun also said that China could draw international attention over the Doklam controversy and the western nations would not support India without conditions as the West has a wide range of common interests with China. The editorial also said that the other countries know that China “will never resort to force till it is the last choice”.

Apart from saying that this time China must teach India “a bitter lesson”, another editorial in the Global Times also raised the Sikkim independence spectre and said that China may support Sikkim’s appeal for independence.

This is not the first time that China has threatened to interfere in Jammu and Kashmir. The Chinese media has made a similar statement when Dalai Lama had visited Arunachal Pradesh in April 2017.

“New Delhi not only allowed the 14th Dalai Lama to visit Southern Tibet, a historical Chinese territory India has illicitly occupied and refers to as ‘Arunachal Pradesh’, but the spiritual leader of ‘Tibetan independence’ was also escorted on the trip by India’s junior minister of home affairs,” the state-run China Daily said in its editorial.

The Chinese media had accused India of using Dalai Lama “as a diplomatic tool to put pressure on China” and said that Beijing could interfere in “turbulent” Kashmir.

The Chinese state media have carried a barrage of critical articles on the Doklam standoff criticising India, but this was the first time Pakistan and Kashmir were brought into the narrative. Doka La is the Indian name for the region which Bhutan recognises as Doklam, while China claims it as part of its Donglang region. Of the 3,488-km-long India-China border from Jammu and Kashmir to Arunachal Pradesh, a 220-km section falls in Sikkim.

China and India have been engaged in a standoff in the Doklam area near the Bhutan tri-junction for the past three weeks after a Chinese Army’s construction party attempted to build a road.

The Indian Army has said it is ready for a long haul in holding onto its position. The Indian soldiers deployed in Doka La have pitched in tents, in an indication that they are unlikely to retreat unless there was reciprocity from China’s PLA personnel in ending the face-off at an altitude of around 10,000 feet in the Sikkim section, PTI quoted official sources as saying.

PTI reported that the officials sounded confident of finding a diplomatic solution to the dispute. Both the countries had agreed to a mechanism in 2012 to resolve border flare ups through consultations at various levels. The mechanism has not worked so far in the current case as the standoff near the Bhutan trijunction, triggered by China’s attempt to build a road in the strategically important area, has dragged on for over three weeks.

India has already conveyed to China that such an action would represent a significant change of status quo with serious security implications for India. The road link could give China a major military advantage over India.