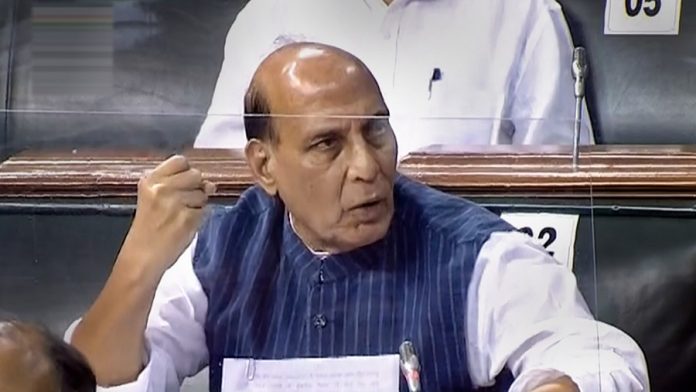 Defence Minister Rajnath Singh on Tuesday said the country is prepared for all contingencies in protecting its sovereignty in the border row with China. In a statement in the Lok Sabha, Singh very clearly said the India and China border issue is yet to be resolved and that there had been no mutually acceptable solution with Beijing not recognizing the current boundary. He said the two views of the two countries on the Line of Actual Control (LAC) was the reason for the flare-up in Ladakh.

He said China disagrees on the border and doesn’t pay heed to the traditional and customary alignment of the boundary. Singh added that this alignment is based on well-established geographical markers and China attempted to unilaterally alter the status quo in violation of bilateral agreements.

Singh said India wanted peace and tranquillity with its neighbour, something which China agreed to despite the borders between India and China remaining unmarked in many areas. Both India and China agree that to maintain peace and tranquillity in the India-China border areas, it is essential for the further development of bilateral relations, he said.

On June 15, when 20 Indian soldiers were killed in Galwan Valley, Indian troops caused heavy loss of life on the Chinese side, he said. The Chinese had mobilised a large mass of troops and armoury along the LAC and inner areas. He said the Chinese troops had violated all past pacts with India by making unilateral moves to alter the border.

Singh cited the north and south banks of the Pangong Lake among many friction points and added that the Indian Army had deployed forces to counter the Chinese.

The Congress members wanted a discussion after Singh’s statement and wanted Prime Minister Narendra Modi to answer their questions. But the government refused to reply citing the sensitive nature of the topic. Speaker Om Birla then refused to allow Congress floor leader Adhir Ranjan Chowdhury to speak following which the party walked out.

Congress leader Rahul Gandhi tweeted that the Defence Minister had misled the country and called upon Prime Minister Modi to not be afraid of naming China. Gandhi said the country will always side with the Indian Army.