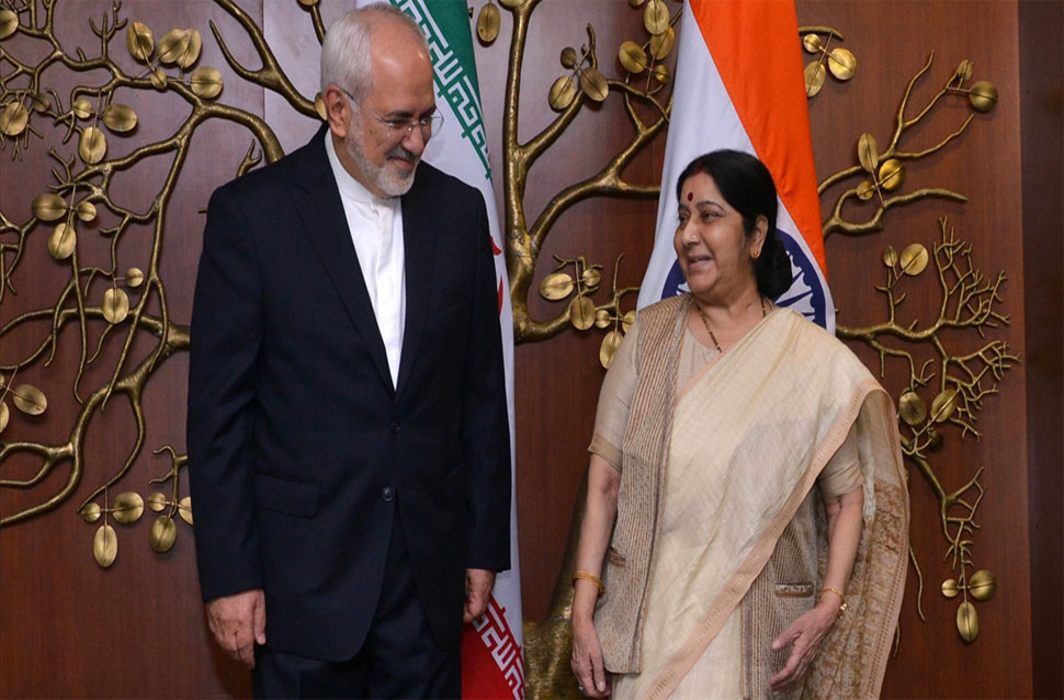 Despite US threats of imposing “the highest level” of economic sanctions against Iran, India has made it clear that it will continue its trade with that country as New Delhi honors UN sanctions and not the “country specific sanctions”. It has asserted that New Delhi does not formulate its foreign policy “under pressure”.

On Monday, External Affairs Minister Sushma Swaraj clarified on India’s policy towards Iran on two different occasions. After making a statement during her ministry’s annual press briefing clarifying about sanctions against Iran, Sushma Swaraj met Iranian counterpart Javad Zarif  in the evening during which he sought India’s support in salvaging Iran’s nuclear deal in the wake of the US pull out.

According to ministry of external affairs statement, “FM Zarif briefed about the discussions that Iran has undertaken with parties to the Joint Comprehensive Plan of Action (JCPoA) following the US decision to withdraw from the agreement.”

The two top diplomats “discussed bilateral, regional and international issues of mutual interest and assessed the implementation of decisions taken during the visit of President Rouhani to India. They included bilateral cooperation in the areas of connectivity, energy, trade and promotion of people to people contacts”.

The sources said that Iran’s foreign minister sought India’s support to the nuclear deal during his talks with Swaraj. China, Russia and a number of European countries are working to salvage the deal.

It said that Sushma Swaraj conveyed that all parties to the agreement should engage constructively for peaceful resolution of issues that have arisen with respect to it.

Sushma Swaraj, while responding to a question during press briefing, said that New Delhi will keep trading with Iran and will only follow UN sanctions and not those imposed by any other country. She recalled that India continued its trade with Iran during earlier US sanctions.

“India follows only UN sanctions and not unilateral sanctions by any country,” she said when asked about New Delhi’s response to the US decision to withdraw from a 2015 nuclear agreement and re-impose sanctions against Tehran.

Zarif’s day-long visit was part of Tehran’s efforts to reach out to major world powers after US pulled out from the 2015 nuclear deal under which Tehran had agreed to stop its sensitive nuclear activities in return for the lifting of crippling economic sanctions.

The Iranian foreign minister has already visited China, Russia and some European countries in the last three weeks after Donald Trump announced US withdrawal from the nuclear deal.

Iran is India’s third largest oil supplier and there were apprehensions about possible impact of the US decision on India’s oil imports. Modi’s government is already facing opposition ire on the unprecedented hike in petrol and diesel prices. Tehran is one of New Delhi’s top oil suppliers.

The other members of Iranian delegation accompanying Zarif had separate meetings with their counterparts where they discussed measures for practical cooperation between the two sides.

In 2015 Iran and P5+1, permanent UNSC members and Germany had signed the deal known as Joint Comprehensive Plan of Action (JCPoA) after years of negotiations. It’s implementation began in January 2016. International Atomic Energy Agency (IAEA) has on 11 occasions has verified full compliance by Iranian authorities.

On May 8, US President Donald Trump had announced that Washington was walking away from the multilateral deal. He also said that he would reinstate US nuclear sanctions on Iran suspended under the nuclear accord and impose “the highest level” of economic sanctions on Iran.

In February this year, during his meeting with Prime Minister Narendra Modi visiting Iranian President Hassan Rouhani expressed readiness to expand mutual relations in all areas.

During Rouhani’s visit Iran awarded a much-awaited agreement to India over the management of part of its strategic Chabahar port – a move that could enable India to dodge Pakistan and reach markets in Afghanistan, Central Asia and beyond.