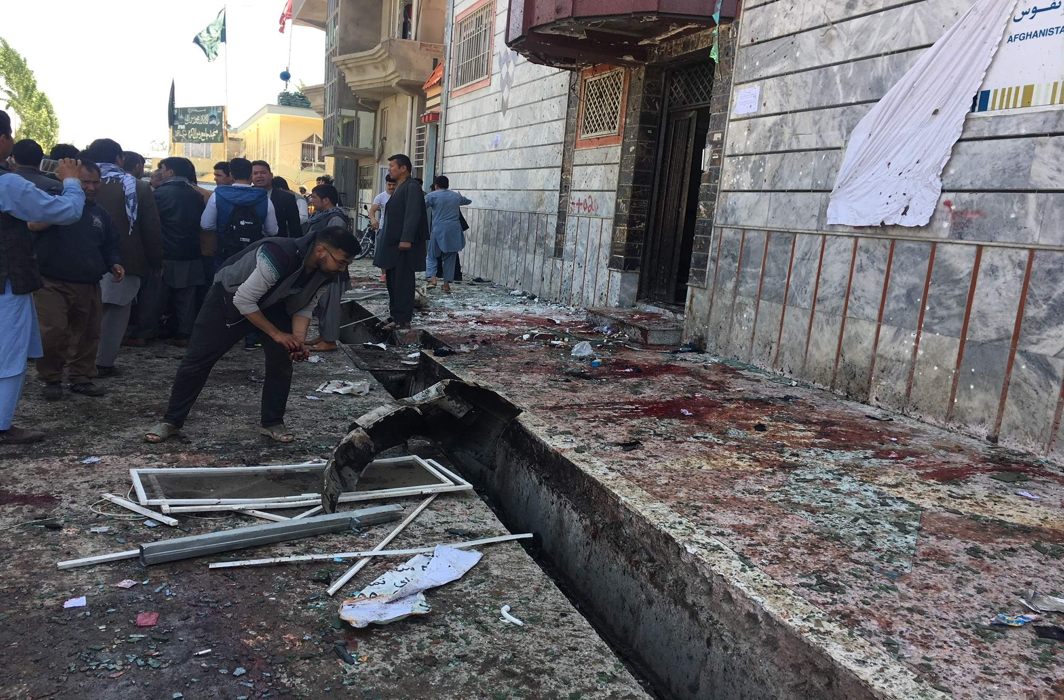 India has joined UN in condemning Sunday’s terror attacks in Afghanistan calling them “cowardly” and “barbaric” leading to the deaths of nearly 70 civilians.

The statement issued by Ministry of External Affairs Sunday evening said, “What makes this attack particularly reprehensible is the fact that the terrorists and their backers chose to attack a voters’ registration centre for the upcoming parliamentary and district council elections.”

At least 57 people were killed in Kabul by a suicide bomber who walked into the crowd at the doorway of an ID distribution centre and detonated his explosives. However, Doha based Al-Jazeera TV network has confirmed the death of 63 people and wounding of hundreds others.

The targeted election ID centre is situated in Dasht-e-Barchi area, a neighbourhood known for being dominated by Shia Hazara community.

Hours later, six more people, belonging to one family, were killed in Pul-e-Khumri city in Baghlan province, when their vehicle struck a roadside bomb near another voting centre.

The terrorist group Daesh (IS) has taken responsibility for the Kabul attack while no group has owned the attack in Baghlan province so far.

Afghan President, in his statement, wished “Allah’s mercy upon those who martyred, speedy recovery to the wounded, and conveyed his deep condolences to the victims’ families”.

Abdullah Abdullah, said in his statement, “Our resolve for fair and transparent election will continue and terrorists won’t win against the will of Afghan people”.

Meanwhile Antonio Guterres, the UN Secretary-General, while condemning the attack said, “They must not be allowed to succeed in deterring Afghan citizens from carrying out their constitutional right to take part in forthcoming elections.”

Tolo news reports that exact figures on how many people had been waiting at the Kabul voter ID centre were not available but officials said that particular office had in recent days been processing about 100 ID applications a day.

Tolo news further reports that by Sunday mid-day, there had been five attacks in less than a week against the election process. Last week three other attacks took place. Media outlets in such terror-infected countries keep reporting hour by hour because of fragile situation and recurring attacks, sometimes many in a single day.

On Thursday, two policemen were killed in the ensuing gunfire when unknown armed men attacked them in Jalalabad City. The policemen were guarding a voter registration centre.

On Friday, a police officer was killed by unknown armed men at a voter registration centre in Qala-e-Naw, the center of Badghis province. The officer was deployed to secure the centre.

Prime Minister Narendra Modi had inaugurated the parliament building in Kabul in December 2015. On that occasion he was quoted saying “We must support Afghanistan without timelines because new clouds of extremism are rising, even as the old ones continue to darken our skies”. The construction of building, conducted by India, began in 2009 and missed its completion deadlines at least three times since 2011.

Most of the terror outfits active in Africa, Middle East, Afghanistan and elsewhere, who are ideologically influenced by Saudi origin Wahabism, oppose democracy. They opposed elections in Iraq after the fall of Saddam Hussein regime in 2003. This was confirmed by a minister in Saudi establishment who reportedly said that more than 2000 Saudi youth had entered into Iraqi territory for “jihad” who will pose danger if they return to the kingdom.

Saudi Arabia is the closest ally of United States and Israel in the region. This has been confirmed repeatedly by officials and leadership in all three countries. Saudi Arabia leads Gulf Cooperation Council (GCC) and Arab League (AL).

US President Donald Trump had chosen Saudi Arabia for his maiden foreign visit in May last year when Riyadh managed to gather more than 50 heads of Muslim states as audience. Major arms sale agreements were signed by Donald Trump in Riyadh.