It was in 1980 that Indian team had won their last gold medal in hockey at Olympics. 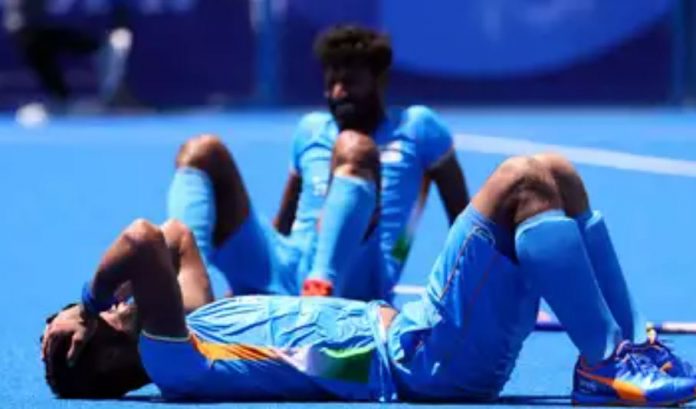 The Indian men’s hockey team on Tuesday lost their semifinal match 2-5 to world champions Belgium. With this, the hopes of the Indian team to play their first Olympic final in more than four decades were shattered. It was in 1980 that the Indian team had won their last gold medal in hockey at Olympics.

However, chances of medal are still not over for the men’s hockey team as it will now play for bronze on Thursday. The last encounter between the two teams in the FIH Pro League match in February 2019 was also won by Belgium.

Belgium will now play against either Australia or Germany for the gold medal on Thursday.

The defence of the eight-time Olympic champions India was put under heavy pressure by Belgium. Belgians secured as many as 14 penalty corners and converted four into goals.

The 2016 Rio Olympic silver medalists’ game plan was clear right from the start as they entered the Indian circle and earned penalty corners with Hendrickx and Luypaert in their ranks.

Read Also: China’s Wuhan to test entire population for Covid-19 after fresh cases emerge
India will now play against the losing team from the second semifinal between Australia and Germany scheduled later.
Meanwhile, India’s men hockey team was promising so far in the tournament. India beat New Zealand 3-2 in their opening group game. Thereafter, they scored wins against Germany (2-0), Spain (3-1), Argentina (3-1), and Japan (5-3) in the group matches.
India had been victorious in all their encounters, except a 7-1 defeat against Australia.